With the Israel Defense Forces (IDF) Artillery Corps preparing a modernization program with an estimated budget of more than $1 billion, Israel’s leading suppliers of military equipment as well as their international rivals competing for the contract to supply a new generation self-propelled cannon. 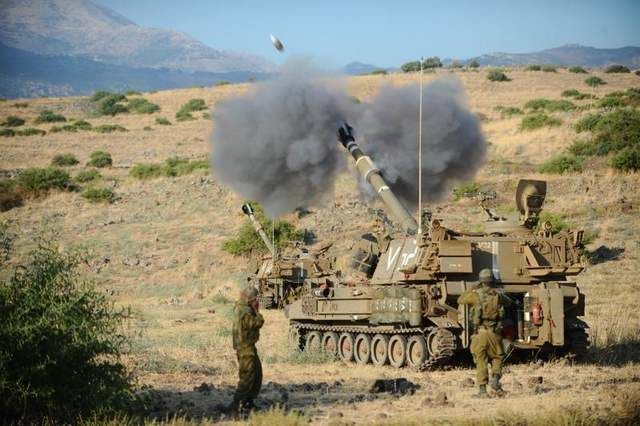 The cannon will be gradually brought in by the IDF Artillery Corps M109 self-propelled howitzers which have been in use for close to fifty years, with finding a replacement being a major priority.

In a recent interview, the head of the IDF Artillery Corps, Brigadier General Roy Riftin pointed to the new replacement weapons as being a strategic factor in for planning for ground forces of the Israeli army under their Fire2025 program. Fire2025 takes an entire investment plan to provide battlefield firepower that would be more lethal, capable of operating at longer range and considerably more precise than the facilities currently in use, whilst being sufficiently flexible to provide effective use across the broadest of operational spectrums.

The Fire2025 program, in itself, as part of a much larger doctrine being adopted by the Israel Defense Forces, under the general heading of the Teuza (Valor) 2014-’18 plan. Final decisions on how the plan will eventually evolve and liable to be made in the near future dependent on the outcome of a series of workshops that will be taking place in October under the jurisdiction of the IDF’s General Staff.

If the plans for updating the M109 receive the necessary approvals, then, according to informed sources, IDF’s potential suppliers will be asked to prepare schedules to supply an autonomously loading 52-caliber cannon with a 155mm barrel integrated on a refurbished or new, low-cost chassis. IDF users expect the autonomous, automatically loading gun, to say one man power whilst effectively firing “smart” shells at a rapid rate of fire, whilst taking full advantage of precision guidance kits developed by local companies involved in Israel’s highly developed weapons industry.

Among the locally based companies expected to be competing for prime contractor status will most likely be privately owned  Elbit Systems,   as well as state-owned Israel Aerospace Industries (IAI) and Israel Military Industries (IMI).

Among the international companies expected to be involved in bidding are Lockheed Martin’s Missiles and Fire Control unit based in Dallas, Texas as well as Munich, Germany’s Krauss-Maffei Wegmann (KMW) and Rheinmetall Defense.

In anticipation of the project being given the go-ahead Elbit Systems have worked reportedly begun some informal talks with potential partners in the weapons developments. However there is speculation that they may still go it alone on the project, depending on the production infrastructure of its Elbit USA subsidiary if the legacy capabilities of its recently acquired Soltam Systems, Israel’s premier artillery provider, can be overcome.

Elbit completed its acquisition of Soltam Systems, based in Yokneam, Israel three years ago and since then have been working in close cooperation with representatives of the IDF Artillery Corps on preparing a series of options to meet the specific requirements for the new gun.

At the same time, Elbit executives continue to liaise with the IDF to optimize C4I (command, control, communications, computers and intelligence) interoperability of all ground force elements through its ongoing Tzayad Digital Army Program.

Vice president for land systems in Elbit’s Land and C4I Division, Boaz Cohen recently stated that the company recently completed development of almost all of the essential elements required to produce an indigenous Israeli offering, while estimating that it would take an additional two years in order to integrate, test and qualify a new gun that would be specifically tailored to IDF requirements.

“As the only gun manufacturer in Israel, we have all the essential building blocks in place, We have the auto loader, the gun, breech, elevation system, electronics system and, of course, the requisite C4I to meet whatever the IDF ultimately determines as its future gun requirements.” Summed up Cohen.

As far as potential international contractors are concerned, reports have it that IMI is expected to team with Rheinmetall to review specifications for what will be a relatively priced modular upgrade package, designed to extend the operational service of the IDF’s vast M109 inventory for a further 40 years, although Rheinmetall have so far declined to comment on this possibility.

According to  reports coming from Israeli defense industry analyst Tamir Eshel, of the online Defense Update, IMI’s proposed upgrade, to be known as the M10917 Spark, will come complete with a longer and more modern 155mm/52-caliber barrel, on a re-engined M109 chassis. Suggestions are that the IMI proposal will also include the integration of automatic shell-loading capabilities, such as used on the PzH2000, which has been developed by KMW and Rheinmetall for the German Army. The PzH2000 specifications may well suit the IDF as it reduces the current eight-man crews required to a maximum of four gunners.

At the same time IAI are reported to be basing their specifications on a KMW artillery gun module that has been integrated on a Lockheed Martin-built M270 MLRS (Multiple Launch Rocket System) chassis, expected to include IAI-developed precision navigation and other company-developed subsystems. Final assembly of the artillery piece will either be completed at the Stark Aerospace facility, situated in Columbus, Mississippi or at Lockheed’s Missiles and Fire Control plant in Dallas, Texas.

In a recent interview, retired Brigadier General Shmuel Yachin, formerly research and development director for IAI in charge of coordinating their land systems programs, the company was placing itself in a strong position to take a leading role in meeting future requirements for the IDF.

“If we can detect the exact location of targets, add smart fuzes that precisely navigate regular (155mm) projectiles and a new generation of longer artillery tubes, the IDF will undergo a real revolution in the fires arena, ” Yachin concluded his interview by speculating.

Contrary to earlier reports from sources within the Israel weapons industry, Israel Aerospace Industries (IAI ) have yet to reach any form of teaming agreement with Lockheed Martin. As is normal practice in these situations, any form of understanding between IAI or  Israel Military Industries (IMI) may have reached with foreign contractors must meet the terms of stringent technology transfer agreements between the defense ministries of the Israel and German governments.

Avi Felder, CEO of IMI hastened to point out that his company’s considerable experience in the field of armored vehicles and weaponry, as well as its intimate understanding of IDF concepts, go a long way in making it a strong and natural candidate for the task of meeting future ground force requirements.

In a recent statement, Morri Leland, director in charge of international business development at Lockheed Martin Missiles and Fire Control, stated that his company is currently exploring relations with Israeli industry in order to identify the best direction to conform to IDF requirements. At the same time, Leland emphasized that his company is working directly with the Israeli government to identify the best solution to meet their future artillery needs, through their long established capabilities for developing integrated systems solutions to a global market, including launch and delivery platforms, fire control systems and weaponry.

“We believe that adapting the highly successful MLRS M270 launch/delivery platform to incorporate a highly automated gun system is one way to provide a long-range, lethal and flexible solution, ” “This choice also has the advantage of being a very cost-effective path, given the synergy that could be gained by supporting a command system that is projected to be in service until at least the year 2050, ” Leland completed his discourse by adding.