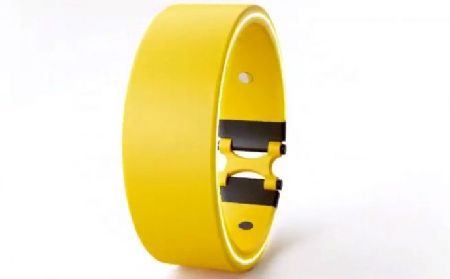 Trust Israelis to transform an ancient religious belief into a bio-medical reality that can be worn around the wrist. The Angel Health Monitor is a biofeedback wristband that senses motion and acceleration, skin temperature, blood oxygen saturation and heart rate. Just like the mythical guardian angel, it monitors your every move to make sure that you are in good health. The health band is synced to a user’s smartphone and laptop via Bluetooth to provide real-time updates on their body’s internal workings.

Tel Aviv-based startup Seraphim Sense is behind the Angel monitor, which has been in development for the past two years. CEO Eugene Jorov, who founded the company with co-founder Amir Shlomovich, said in their Crowdfunding video on Indiegogo: “When I was just a teenager, I lost my father. He suffered a sudden and fatal heart attack. Since then I’ve been looking for ways to use technology to improve health.”

It seems Jorov was convincing, given that Angel already raised $60, 000 of initial $100, 000 goal with still a few weeks left before the end of their crowdfunding campaign. On the first day of the campaign, the company raised $20, 000.

The Angel Sensor will not be the first biofeedback wristband to enter the market (Fitbit’s Flex and Jawbone’s Up are a few that come to mind), but it may be the most ambitious. According to its manufacturer, Angel is distinct in that it monitors multiple vital signs including heart rate, skin temperature, blood oxygen and physical activity, whereas other health bands are more limited.

Angel says it can track your daily cardio routines like running, stair climbing and swimming, and can also monitor your sleep patterns.

Open health for a better future

Angel is guided by a collaborative belief. Jorov told Crowdfund Insider: “We wanted to create the right hardware for the future of health. Right now digital health solutions are started from scratch by building a sensor. Most devices end up with very limited functionality. Whatever the product, its users are typically locked into using only the app that comes with it. Health is just too important to remain closed to mass innovation and we believe in an open future for the health eco-system.”

Angel has created an open platform in which developers have access to their SDK (software development kit). This allows them to create new applications that transform the raw data gathered by Angel’s four sensors (movement, temperature, optical, and acoustical) into useful health information.

“We are already working with medical advisors to ensure the data developers can access will enable irregular heart rate detection, detection of falls, early heart failure warning and beyond… The raw data Angel provides for each sensor enables independent health research by partners, ”Jorov told TechCrunch.

Angel intends to apply for FDA approval so that it will eventually become a medical grade device. Jorov says the device will be supported by both Android and iPhone and be accessible via web API. It is estimated that the product will arrive on the market by April 2014.