The association will be partnering with former NBA legend Yao Ming to help spread the growth of basketball in the country. 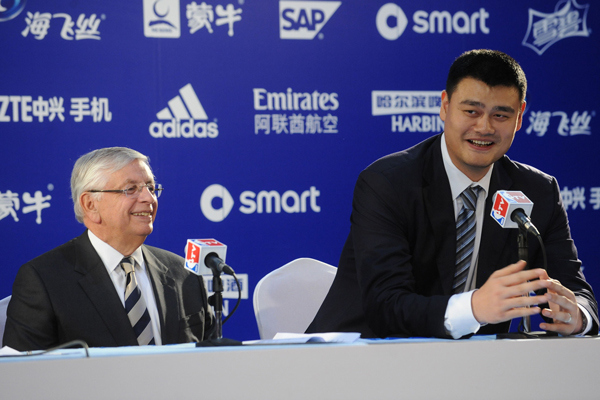 Despite the fact that David Stern will be stepping down from his role as commissioner of the National Basketball Association at the beginning of February next year, it looks like he intends to keep himself very busy, in the job he has held for exactly 30 years.

This week found Stern in Beijing, China where he announced that NBA China will be entering into partnership with Shanghai, China born Yao Ming to open the first-ever NBA Yao School, in Beijing. Also present at the press conference, held at the MasterCard Center were NBA Deputy Commissioner Adam Silver, who will be replacing Stern in February as well as CEO of NBA China, David Shoemaker.

Coincidentally, as Stern officially vacates his post in February 2014, the NBA Yao School will be opening its doors in Beijing for the first time. Plans are to provide after-school basketball training as well as fitness programs for young people up to the age of 16, with the chain being programmed to suit a variety of skill levels. In addition to training the NBA Yao School will also impress on the young people of Beijing the importance of proper communication, leadership as well as teamwork within the basketball environment.

Announcing the decision David Stern recalled that when Yao retired, he emphasized that while he would be leaving the court he would not be leaving the sport, for which she remains an extraordinary ambassador. “We are honored to continue working with Yao to grow and develop basketball in China.” Stern summed up.

In reply Yao stated that it has always been his dream to positively impact the lives of youth through sports participation, with followers of Chinese basketball being both passionate and eager to participate in high-standard basketball training programs.

Officials of the NBA will be responsible for the creation of an approved basketball training curriculum and operations manual, as well as appointing the an experienced technical director to implement and manage the program, while Yao will be handed the responsibility for both the development and day-to-day operation of the school.

Plans are that current NBA players as well as legends from the past will make regular visits to the school in order to provide hands-on instruction on various basketball techniques as well as how to improve and maintain physical body strength and condition, understand the importance of nutrition as well as observing overall player development.

Stern also announced that NBA China’s first program will take place at the Wukesong Basketball Park in Beijing, commencing in February 2014 and continuing for three months until the end of May.

Since NBA China and Yao first announced their partnership last year, NBA Cares has become a considerable provider of support for the Yao Foundation, especially their Hope School Basketball Season, with more than 60, 000 children taking part.

In October of this year, David Stern announced his plans to relinquish the post of NBA commissioner, effective from the first of February, 2014, with his current deputy, Adam Silver, following him into the hot seat.

David Stern was born in New York and raised in Teaneck, New Jersey. After completing high school Stern attended Rutgers University, where he studied history, later earning his masters in law from Columbia Law School in 1966, passing the state’s bar examination and gaining admittance to the bar in New York during the same year

During his time as Executive Vice President Stern was involved in two dramatic changes within the infrastructure of the Association, particularly relating to NBA Players. The first was implementation of random drug testing and the second the introduction of a team salary cap, which ostensibly created a revenue-sharing system where franchise owners and players became a form of trading partners. Both of these changes proved to be highly beneficial to the game as well as solidifying David Stern’s standing in NBA circles.

Stern was appointed to the role of Commissioner of the NBA on the first of February 1984, replacing Larry O’Brien.

Stern’s appointment more or less insane with the emergence of Michael Jordan, as well as a few other high profile players including Larry Bird and Magic Johnson, that ushered in a new era of commercial success for the NBA.

During his time as commissioner, Stern was responsible for the expansion of the NBA from 10 franchises up to the current total of 30 franchises, crossing the border into Canada. The game’s popularity grew to such a stent that NBA teams were televised is televised in 215 countries around the world in 43 languages.

Much of the credit for the international recognition of the game of basketball must go to David Stern who dramatically increased NBA followers through setting up training camps, organizing exhibition games around the world, and promoting the recruitment of players from outwith North America, with recruiting more international players with Yao Ming being a particularly outstanding example.