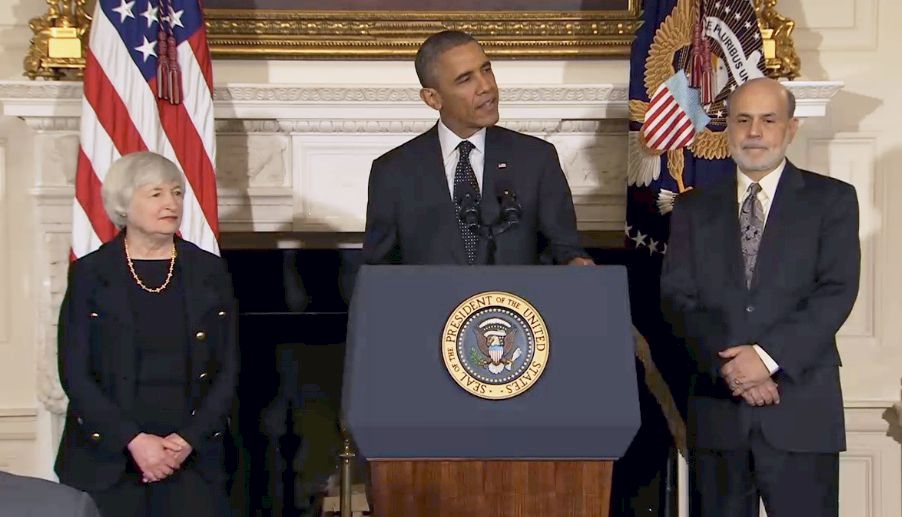 President Obama today nominated Federal Reserve Vice Chair Janet Yellen to lead the United States Central Bank as its new chairman. In doing so Yellen has finally broken the glass ceiling to become the first female Central Bank head of a major country in what has hitherto been very much a clubby man’s world. To date, only the South African Central Bank has had a woman leader, its current incumbent Ms. Gill Marcus, which may also have been a useful precedent for Janet Yellen’s own new appointment.

The announcement ends a protracted search, that has been very much in the public eye, for the head of what is one of the most important economic and financial policy jobs in the developed world. An earlier front-runner for the job had been former advisor Lawrence Summers with whom President Obama has built a relationship of trust, only for Mr. Summers to withdraw his candidacy recently in the face of huge criticism. The criticism had been as much as anything about his own personal style, including from some Democratic Senators whose votes will be key to the confirmation process.

However style is an important part of the Central Bank head’s job, as much of what he or she hopes to achieve in the role often depends on expectations that evolve in financial markets around the, frequently Delphic, utterances that central bankers regularly make. They do so in an environment where the resulting transmission mechanisms that then impact dynamic adjustments in expectations can be equally oblique, but remain very real nonetheless.

Janet Yellen, who is 67, has been the Fed’s Vice Chair since 2010, when Mr. Obama nominated her to the post and she was then easily confirmed by a voice vote in the Senate.

As President Obama announced Yellen’s appointment at the White House, the two were joined by outgoing Fed Chairman, Ben S. Bernanke. Bernanke, who had not actually confirmed his own departure until his successor was named, has served as head of the Bank for eight, sometimes dramatic, years. It was his job to put in place a rescue of the financial system in 2008 and then to follow up with unprecedented monetary policy actions to try to get the economy growing again subsequently. Having himself studied the systemic mistakes made by the world’s Central Banks during the depression era of the nineteen thirties, when in academia, including by the United States Bernanke came into office perhaps uniquely qualified for the task that ensued.

Janet Yellen comes very much from the same policy mould as Ben Bernanke himself. She is expected to continue the accommodative approach set forth by Bernanke but, with the unemployment rate having fallen now to 7.3 percent, some Fed officials, as well as an increasing number of outside observers, say it soon will be time for the Central Bank to begin the “tapering off” of the massive monetary stimulus that has led to its regular bond buying program of as much as US$85 billion each month.

Managing the Fed’s eventual exit from such monetary stimulus without causing the economy to collapse all over again is therefore likely to be an ongoing challenge, given the wide scope of the central bank’s role in the economy today.

However the inception of the program, which was also massively criticized at the time by many as likely to drown us all in inflation, in the end did not seem to adversely affect inflation at all which has remained very low. A primary reason seems to be, according to Economics Nobel Laureate Paul Krugman at least, that banks ended up keeping massive amounts of their resulting excess liquidity on deposit at the Fed, rather than lending it out aggressively and inducing eventual inflationary increases in demand. Accordingly fears of the tapering off of the program itself when it begins may also be over-blown, as perhaps that liquidity may tend to be mopped up again by banks buying back the Governments bonds, and their excess reserves being relatively painlessly withdrawn. In truth no-one really knows yet.

As head of the San Francisco regional Federal Reserve Yellen was right about the mortgage crisis before some others, and at a Federal Reserve Board meeting in Washington in December 2007 she stated then: “The possibilities of a credit crunch developing and of the economy slipping into recession seem all too real, ” she said, reading carefully measured words from a sheet of paper. The “shadow banking system, ” the complex financial markets that funnels credit to Americans, was freezing up, she said, and the economy was likely to slow significantly.

When Presdent Obama appointed Yellen to become the Fed’s Vice Chair in 2010, she quickly took on a different role in that job than her two predecessors, acting more as an independent force within the institution than any of her predecessors. And Yellen has spent the past three years trying to persuade Ben Bernanke and the rest of her colleagues on the monetary committee to adopt her preferred course for policy, continuing to advocate aggressive steps to pump money into the economy to bring down unemployment.

Yellen is married to George Akerlof, a Nobel prize-winning economist and professor emeritus at the University of California, Berkeley. Their son Robert is also a professor of economics at Warwick University in the UK.

Janet Yellen was an assistant professor at Harvard in 1971-76 and an economist with the Federal Reserve Board of Governors in 1977-78. Beginning in 1980, Yellen began conducting research at the Haas School and teaching macroeconomics to full-time and part-time MBA students.

She is still today a Professor Emeritus at the University of California, Berkeley’s Haas School of Business, where she was named Eugene E. and Catherine M. Trefethen Professor of Business and Professor of Economics.