Three Jewish scientists have won the 2013 Nobel Prize for chemistry, awarded by the Royal Swedish Academy of Sciences. They are Israeli-born Arieh Warshel of the University of Southern California, Los Angeles; South African-born Michael Levitt of Stanford University School of Medicine, Stanford and Vienna-born Martin Karplus of L’Université de Strasbourg and Harvard University.

The award was made for the development of multiscale models for complex chemical systems, and 8 million Swedish Kroner, or about US$1.25 million will be shared equally by the three secientists.

In its’ reasoning, the Swedish Academy noted that “Chemists used to create models of molecules using plastic balls and sticks. Today, the modelling is carried out in computers. In the 1970s, the three nobel laureates laid the foundation for powerful computer programs that are used to understand and predict chemical processes. Computer models mirroring real life have become crucial for most advances made in chemistry today.”

“The work of Karplus, Levitt and Warshel is ground- breaking in that they managed to make Newton’s classical physics work side-by-side with the fundamentally different quantum physics. Previously, chemists had to choose to use either or. The strength of classical physics was that calculations were simple and could be used to model really large molecules. Its weakness, it offered no way to simulate chemical reactions. For that purpose, chemists instead had to use quantum physics. But such calculations required enormous computing power and could therefore only be carried out for small molecules.”

“This year’s Nobel Laureates in chemistry took the best from both worlds and devised methods that use both classical and quantum physics. For instance, in simulations of how a drug couples to its target protein in the body, the computer performs quantum theoretical calculations on those atoms in the target protein that interact with the drug. The rest of the large protein is simulated using less demanding classical physics.”

“Today the computer is just as important a tool for chemists as the test tube. Simulations are so realistic that they predict the outcome of traditional experiments.”

Arieh Warshel was born on a kibbutz in Israel in 1940, fought in the Israel Defence Forces in both the 1967 and 1973 wars and today holds both American and Israeli citizenship. After earning his initial degree at the Technion he obtained his PhD at the Weizmann Institute in Rehovot in 1969. Arieh Warshel later taught at the Weizmann in the nineteen seventies before moving to the University of Southern California in 1976 where today he is a Distinguished Professor, and also a Fellow of the National Academy of Sciences.

Warshel said today “I feel Israeli, ” even though he has spent almost the past 40 years in the US and also has US citizenship. He told Israel Army Radio he visits Israel often, and that his children speak Hebrew.

Michael Levitt was born in 1947 in Pretoria, South Africa, and holds both UK, US and Israeli citizenship. He earned his initial degree at Kings College London and obtained his PhD from Cambridge University in 1971. He also taught at the Weizmann Institute from 1980 to 1987 before joining Stanford University where today he is Robert W. and Vivian K. Cahill Professor in Cancer Research in the School of Medicine and Professor, by courtesy, of Computer Science.

Martin Karplus was born in Vienna in 1930 and fled from the Nazis to America with his parents as a small child in 1938 when he was just 8 years old. There they had been a prominent secular and intellectual family, with even a street named after them. He studied initially at Harvard University and later earned his PhD from Caltec. Today he is Theodore William Richards Professor of Chemistry, Emeritus at Harvard. He is also Professeur conventionné at L’Université de Strasbourg.

Two scientists have won the 2013 Nobel Physics prize for their work on the theory of the Higgs boson particle. The two, Peter Higgs, from the UK, and Jewish holocaust survivor Francois Englert from Belgium, share the prize. In the 1960s, they were the earliest to publish among several physicists who proposed a mechanism to explain why the most basic building blocks of the Universe have mass.

The mechanism predicted a new particle, called the Higgs boson, which was finally discovered last year at the Large Hadron Collider at CERN, in Switzerland (Centre European for Nuclear Research). “This year’s prize is about something small that makes all the difference, ” said Staffan Normark, permanent secretary of the Royal Swedish Academy of Sciences. The two scientists actually proposed the theory independently of each other (and Englert did so together with his now deceased colleague Robert Brout).

The awarded theory is a central part of the Standard Model of particle physics that describes how the world is constructed. According to the Standard Model, everything, from flowers and people to stars and planets, consists of just a few building blocks: matter particles. These particles are governed by forces mediated by force particles that make sure everything just works as it should.

The entire Standard Model also rests on the existence of a special kind of particle: the Higgs particle. This particle originates from an invisible field that fills up all space. Even when the universe seems empty this field is there. Without it, we would not exist, because it is from contact with the field that particles acquire mass. The theory proposed by Englert and Higgs describes this process.

Even though it is a great achievement to have found the Higgs particle – the missing piece in the Standard Model puzzle – the Standard Model is not the final piece in the cosmic puzzle. One of the reasons for this is that the Standard Model treats certain particles, neutrinos, as being virtually massless, whereas recent studies show that they actually do have mass. Another reason is that the model only describes visible matter, which only accounts for one fifth of all matter in the cosmos. To find the mysterious dark matter is one of the most important remaining objectives as scientists continue the chase of unknown particles at CERN.

Professor Englert is also a Sackler Professor by Special Appointment in the School of Physics and Astronomy at Tel Aviv University.

In 2004 Professor Englert and Professor Higgs were jointly awarded the prestigious Israeli Wolf prize by the Wolf Foundation for their theoretical work underpinning the discovery of the Higgs bosun particle.

Professor Englert has made no public comment on award of the prize though it has certainly been noted on his biographical page at his University. 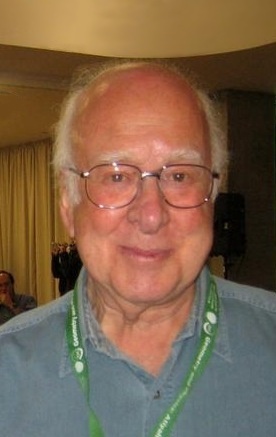 Peter W. Higgs is a UK citizen. He was born in 1929 in Newcastle upon Tyne, UK. He earned his Ph.D in 1954 from King’s College, University of London. Today he is Professor Emeritus at University of Edinburgh, UK.

Edinburgh University released a prepared statement from Higgs, who today is 84 and has been trying his best to stay completely out of the limelight for this announcement:

“I am overwhelmed to receive this award and thank the Royal Swedish Academy, ” he said. “I hope this recognition of fundamental science will help raise awareness of the value of blue-sky research.”

In this article:researchers, Weizmann Institute of Science, Finance