After the announcement that Tina Brown, the web site’s Co-founder and Editor will be leaving in January, Diller has now  let a further 45 staff go as part of  a major reshuffle. 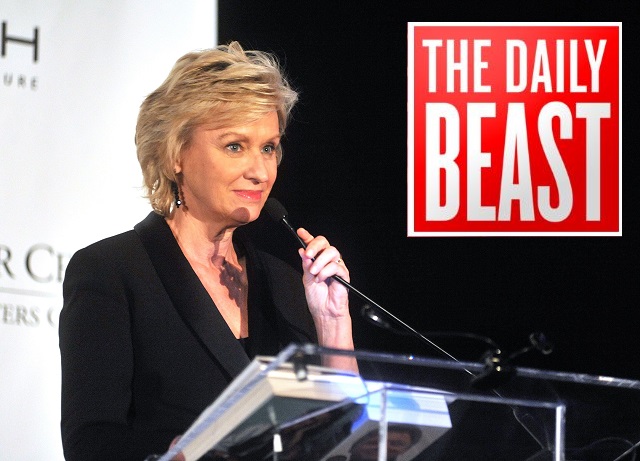 It would be an understatement to say that things have not been same at the Daily Beast web site since its disastrous  merger with Newsweek magazine, owned by Barry Diller’s InterActive Corporation (IAC).

Even though IAC managed to sell of Newsweek to International Business Times Media last month , which will now  continue to be published in  a digital-only format.

However, long before Diller managed to sell of Newsweek,  the deterioration of relationships at the Daily Beast had reportedly reached irreparable lows, and, according to media reports, it was no great shock when Ms. Brown decided to call it quits at the web site she founded and will  leave when her contract expires in January.

Nobody in the media industry has any fear that Ms. Brown’s talents will not be almost immediately taken up , and she apparently has already announced that she planes e to create her own “theatrical journalism” media company, to be called  Tina Brown Live Media.

Previous to founding the Daily Beast in conjunction with Diller in 2008, Tina Brown was already high profile, having also worked as an  editor at  the New Yorker and Vanity Fair magazines as well as writing the official biography of the late Princess Diana “The Diana Chronicles” first published in 2007 on the tenth anniversary of death. Ms.Brown  has a Jewish  grandfather on her father’s side.

While Daily Beast as a separate entity was relatively profitable in its early days as soon as it merged with  Newsweek, the combination was too prove no less than disastrous  for IAC, becoming  huge money-losers. Earlier this year, Diller  ever forthright, did admit in public that buying Newsweek was “a mistake.”

From then on in, the atmosphere at the Daily Beast became ever more beastly, and by the middle of  September, official  reports coming out of IAC stated that Ms. Brown’s contract, due to expire in January will not be renewed.

In attempt to raise morale among  the Daily Beast staff after the news of Ms. Brown’s impending departure was announced, Diller circulated an internal memo to staffers which not surprisingly leaked out. Reading between the lines ( and who does that better than a web writer or editor) it was reportedly possible to comprehend that Diller might be having some serious misgivings regarding a rosy future for  The Daily Beast, although he did bouy up the staff by stating that he remained hopeful that IAC can continue to publish the Beast with as much energy, verve and moment as Tina has given us. He did round off his message by stating that he was unable to  make promises for the future, while promising that he will come to a conclusion by the first week in October.”

And with the news that the Daily Beast is about to let go of two dozen writers and editors signs are not healthy for the website, although they will still retain around  65 staff memberers, the same number that they had on board when the site was established five years ago.

It could be possible that Diller is taking the Daily Beast to a form of consolidation in an attempt to match incomings with outgoings, as, despite its internal turmoil, the site continues to attract considerable traffic, up a reported  36 percent  from the same period last year.

In the meantime it has been reported that the  Daily Beast’s managing director Deidre Depke and its  executive editor John Avlon will be assuming Brown’s duties when she leaves her post, which, according to indications, before her contract runs out.

According to Avlon the Daily Beast is liable to keep roaring for some time, with a revised  operating budget for 2014 already having being prepared.

Barry Diller was born and raised in San Francisco, California. After dropping out of UCLA to follow his dream to make a career in the exciting world of TV of the sixties Diller worked with  a number of large entertainment companies, the last being with Rupert Murdoch at Fox where he was to remain for eight years.

After leaving, Diller went on to establish an entertainment empire of his own, building a  personal fortune of around $1.9 billion.