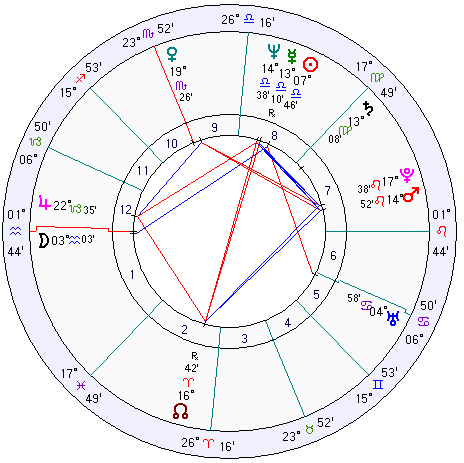 October: we may see the beginning of economic crisis again

October is the anniversary of the establishment of the People’s Republic of China and the first days of the month could herald economic crisis there, which might then become more dramatic in the rest of the world.

As for Saturn in Scorpio in the Astro Map of China this tends to ensures even more sharp crises in November and December as well.
Although the Chinese are not yet completely transparent in some of their economic reporting, it will be difficult to completely hide the difficult trends are created in the near future (and more on this is in a later post).

The Map of Japan also shows problematic signs and their expression is indicated below.
In the United States the focus of considerable problems can be found in President Obama’s own astrological map. He has felt the need to complete economic measures, but the results have been disappointing because the economy has not responded as expected. The President will face an unpleasant reality and continued pessimistic forecasts.

The month of October starts all on the wrong foot everywhere. We see elements of danger and escalation, with serious possible long-term economic consequences .
These are the days of crisis. Events may get out of control and influence the global economic mood.
Also, during this period Mercury enters Scorpio. This is a convenient mode typical of spreading rumours, hints and building of illusions. This is especially true now because of the presence of Mercury in Libra with a positive aspect with Neptune.
Financial institutions will again do very well at the expense of small retail investors. Therefore, small investors listen: you must be careful not to be the fish devoured by hungry sharks.
The stars may also affect world oil prices. There are significant gains to be had with major companies engaged in the field, possibly with chances to find significant amounts of oil and gas . Since the map of Rohani, Iran’s President, shows Mercury at 3 degrees in Scorpio, we may see relief of oil sanctions with Iran as an additional economic game .
Financial economic issues are sobering global issues, heavily related to work and unemployment and their impact on the economic future.

Venus enters Sagittarius. A frenetic position, where betting or speculative influences reaches those addicted to gambling. This is an aspect that can tempt such a person towards adventure, dangers and excitement .
It is moment for the gamblers and swindlers, serially promising grandiose plans . We Recommend to beware of large investments and any important transactions under this aspect .

Between October 15th-17th Venus creates a surprisingly harmonious aspect with Uranus . This enables room for a positive turnaround in the economy. Sudden events that create optimism in the global market . The big question is whether this is a positive thing for its long-term implications .
On October 17th Mercury starts getting ready for departure, which will begin on October 21st – from this date please be careful signing contracts, agreements , commitments, new job starts , partnerships , deals and advertisements .
Scorpio Mercury ‘s retreat will continue until October 31st . However, this withdrawal has meaningful consequences which will still be felt until the beginning of December.

Mercury has been regressing in Scorpion. In addition, a star brings also aspect-related scandals, and unexpected revelations.
We will see an increase in the level of hope, and sometimes of delusions, in the economic field. But also considerable financial loss, and being long could be a bad bet .
Events under the influence of these stars could make such loss a large figure and bring a sense of missed opportunity .
The last days of the month will gain put global security issues on the agenda of international banks, and the need to regulate relations between hostile nations.