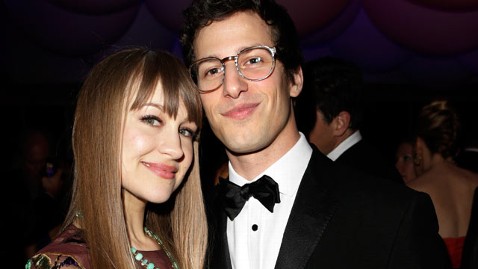 Andy Samberg, who sprung to fame as one of the most talented comedians to appear on the long-running comedy show Saturday Night Live has taken himself off the list of eligible bachelors, after marrying singer/songwriter Joanna Newsom last weekend.

Joanna Newsom became Joanna Samberg at an intimate ceremony held at the Post Ranch Inn in Big Sur, California, in the company of family and friends including stars of the cast of SNL. For now nearly finished poster Among the guest list were Justin Timberlake, Jessica Biel, Maya Rudolph, Adam Sandler, Amy Poehler and Nick Kroll.

Andy Samberg was a member of the cast of Saturday Night Live, for seven seasons running between 2005 to 2012 before leaving to pursue a career on the larger scheme.

Samberg will be particularly remembered for his role in popularizing the SNL Digital Shorts, a series of satirical and highly comical short films and music videos, in which he always played a central role alongside other members of the SNL cast and other guest artists. Particularly memorable from Samberg’s stint on SNL was his brilliant impersonations of key members of the world of entertainment, business and politics.

The happy couple met more than five years ago and has been inseparable ever since. Signs that things were getting serious was when the couple announced their engagement in February, and now have finally taken the plunge.

Andy Samberg is falling fast in the footsteps of his good friend and former Saturday Night Live co-star Seth Meyers who at the beginning of the month married his long-term girlfriend Alexi Ashe, a well-known human rights lawyer.

Apart from his personal life Meyers’ professional life will also be making a dramatic change towards the end of the year when he takes on the white hot role of replacing Jimmy Fallon as host of Late Night, when Fallon moved to prime time to host The Tonight Show.

After leaving the cast of Saturday Night Live, Andy has featured in a couple of films with his good friend Adam Sandler, That’s My Boy and Hotel Transylvania., as well as taking a starring role in a comedy series produced by Fox, Brooklyn Nine-Nine, which incidentally premiered the week of the wedding. 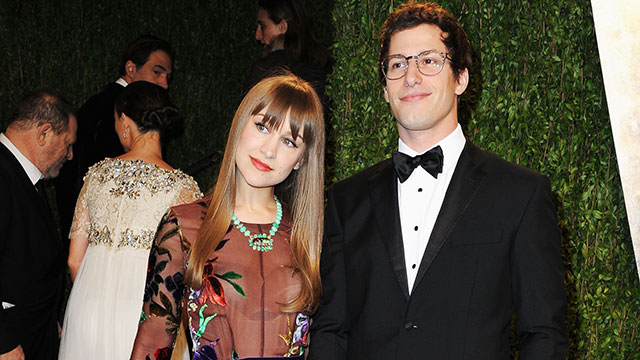 Andy Samberg was born and raised in Berkeley, California.

Samberg admits to becoming interested in creative writing when attending Berkeley High School which he was when he first discovered Saturday Night Live. After completing high school, Andy went on to study, first of all at the University of California, Santa Cruz, for two years before deciding to transfer East to the New York University to study at its acclaimed film school.

After completing his studies Andy Samberg began when his profession through making comedy videos in conjunction with his two close friends Akiva Schaffer and Jorma Taccone. Samberg is acknowledged as being one of the first artists to fully understand the potential of the internet as a platform for short films. His name of popularity spread from 2005 onwards thanks to the launch of YouTube, which, according to Samberg and many others in the entertainment industry, has helped to introduce a host of talented writers, producers directors and actors and actresses to the world of the digital driven media and entertainment industry.

Samberg first caught the attention of the casting crew on Saturday Night Live through the sketch comedy website that he formed in conjunction with Jorma Taccone and Akiva Schaffer, known as the Lonely Island.

Initially the trio’s writing talents were used by the Saturday Night Live team, with Andy eventually appearing as a regular on the show.

Joanna Newsom Samberg was born and raised in the small town of Nevada City, California into a musical family. Joanna began playing the piano when she would just four, later on also learning to play the harp

After completing high school Joanna studied composition and creative writing at Mills College in Oakland, California, airing some extra cash and experience through playing keyboards in a local band known as the Pleased.

Joanna Newsom Samberghas always been this something of a celebrity in her own right particularly in the independent music scene. In recent years Joanna has performed at a number of concerts and live television shows, such as Jimmy Kimmel Live! on ABC.