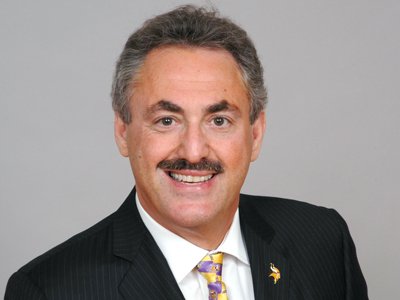 Zygi Wilf Must Pay Up in Lawsuit Judge Rules

Yesterday a Superior Court Judge in Morristown, New Jersey awarded US$84.5 million in damages to two two former business partners of Zygmunt “Zygi” Wilf, and of his brother Mark and their cousin Leonard.

The Wilfs were ordered by Judge Deann Wilson to pay the money to Ada Reichmann of Toronto, who is married to Ralph Reichmann a member of the prominent Reichmann real estate development family there, and to her brother Joseph Halpern of Brooklyn.

The judgment comes as the culmination of a legal dispute that goes back twenty one years to 1992 and which only in the last couple of years finally went to trial. Millions of dollars have been spent on legal fees by both sides and, as part of the judgment, the Wilfs are now ordered to reimburse Ada and her brother for their legal costs.

The judgment, but not the amount of damages, had been announced by the Judge on August 5th, and now we have the financial penalties. Yesterday Judge Wilson ruled that Zygmunt Wilf must pay 60 percent of the punitive damages, while his brother, Mark, and cousin, Leonard Wilf, must pay 20 percent each.

There is an oft-quoted phrase that is used about the law, “justice delayed is justice denied”, which is alas a principle too often honoured in the breach rather than acted upon as courts clog up with ever-increasing amounts of litigation. Accordingly, the Judge in this case had commented earlier as follows:

“To my knowledge, there has never been a case like this in New Jersey jurisprudence, ” she said, and even delaying her own retirement to hear the case to its conclusion. “We try to move cases along. There is no reason in the world for a case to be tried 20 years after it was filed.”

The suit arises out of the five entering into a partnership to develop Rachel Gardens a large 764 unit apartment complex in Montville New Jersey in the nineteen eighties. Ada and her brother Joesph claimed in their suit that the Wilf family members systematically cheated them out of their fair share of revenues from the complex once it was finished, by running what amounted to “organized-crime-type activities” in their bookkeeping practices that gave the Wilfs a disproportionate share of the income.

Judge Wilson has now agreed with them

Wilson found that Zygmunt Wilf, along with his brother, Mark, and their cousin, Leonard, committed fraud, breach of contract and breach of fiduciary duty and also violated the state’s civil racketeering statute or RICO.

The two partners, Ada Reichmann of Toronto and her brother, Josef Halpern of Brooklyn, the longtime former on-site manager at Rachel Gardens, are entitled to compensatory damages, punitive damages, triple damages under the RICO statute, a redistribution of revenues dating to 1992 and reimbursement for their attorneys’ fees, Wilson said.

“The bad faith and evil motive were demonstrated in the testimony of Zygi Wilf himself, ” Wilson said: Wilf’s “candid and credible” testimony detailed how he felt Reichmann got “too good a deal, ” and he “reneged” on the arrangement initiated by his own uncle, Harry Wilf, back in the 1980s, when construction began on Rachel Gardens, Wilson said.

Wilson also announced that she will dissolve the partnership, meaning the Wilfs may continue to run Rachel Gardens after their former partners are compensated. “No way can they go back and work together, ” Wilson said.

Discussing the Wilfs’ misdeeds, Wilson said they failed to meet the “barest minimum” of their responsibilities as business partners. “I do not believe I have seen one single financial statement that is true and accurate, ” Wilson said, adding that annual statements were not given to Halpern and Reichmann after 1989.

Although Reichmann and Halpern were each supposed to receive a 25 percent share of revenues from Rachel Gardens, Reichmann never received her share and Halpern didn’t receive his 25 percent share after 1990, Wilson said. Reichmann, the wife of a developer, finally filed a law suit in 1992 after Wilf declared she wasn’t contributing to the cost of the project’s ongoing development and removed her as a partner.

A judge restored her to the partnership in 2000. A key ruling came in 2006, when a state appeals court removed a previous ruling that set Reichmann’s share at a 1992 level and sent the case back to Superior Court for a “full accounting of her share.”

“There was a consistent, pervasive method of removing funds so they would not reach the partners, ” Wilson said. Wilson said RICO damages are appropriate to the case because Reichmann and Halpern “were clearly the targets of misappropriation of funds.”

So very strong stuff from the judge, but as the Wilf’s lawyers quickly pointed out afterwards not a penny will be paid for quite some time as they intend now to file appeals of yesterday’s ruling.

Successful Partnerships Are All About Trust

One of the most interesting aspects of this case is that it illustrates all too clearly the key ingredient of partnership – whatever the documents may say everything is founded on trust and the partner who is sitting on the ground is in control. In this case the deal had been set up by Zygi’s own Uncle Harry and later Zygi proudly and voluntarily chose not to honour it, and said so to the judge. This was in itself a major transgression of one of the most basic unwritten rules of the real estate business – treat your partners honestly and well, even occasionally to your own perceived disadvantage if necessary.

The rule exists simply because the entire real estate industry is based on hundreds of thousands of partnerships, all over the continent, and if you welch on a deal with one of your partners it will get out and then it is less likely that somebody else will partner with you later. Not out of self righteous principle, but simply out of self defence – if he’s done it once he might do it again to us too they will say. To violate this rule successfully you have to be so large you can get away with it, but even then, since in real estate it is your smaller local partners who bring you the best new deal, the bigger you are and the more distant you are from local real estate knowledge down on the ground where it counts, you are then even more dependent on them for deal flow than you think.

Thus at a company where this writer once worked, which was a public company developing mega-property developments all over North America in the early nineteen nineties, the top management of the company used to pay great attention to its partner relations. At the annual partners meeting huge care was lavished on these individuals to ensure they were happy, in order to maximize the inward flow of future deals from all over the continent, even if this skewed some partnership ratios in their direction at times. At the head office we were just the money people in reality, though that was not how it was presented to the outside world.

Separately from all this, Zygi Wilf is a co-owner of the Minnesota Vikings football team, who are currently engaged in a process leading to the building of a new football stadium. Whether or not this ruling will put a crimp in Zygi Wilf’s ability to put up his own share of the cash for the new stadium, at the very least it may well give his partners there pause for some thought when thinking of future mutual arrangements.