Emirates Team New Zealand (TNZ) came out hoping to win the 34th America’s Cup series today by winning just one more race. Even though they started the day with a big lead 8-3 on the race course, we have actually had exciting closely fought races throughout this series, with very evenly matched machinery for much of the time. TNZ started out the series clearly as the boat with the most consistent team in tactics and execution of plans, but in the recent races Oracle has been doing much better as their team has gone up the experience curve.

Today though Oracle got a terrific start in the first race, and led from there all the way to the finish to win the race cutting the deficit to 8-4 in favour of TNZ on the water. Then the wind blew up again forcing postponement of the second race, for it to finally be cancelled half an hour later. So TNZ missed its chance to get the one win they needed today to win the series and take the America’s Cup back to New Zealand.

Now we will race again every day, with no more rest days till we have a winner and TNZ is leading Oracle 8-4 just on the water.

Please read on below to find out how the two teams performed today, blow by blow, in an action packed finale to a superb series – one that will be long remembered, and likely replicated again in some manner as a format for future America’s Cup series. I doubt there can be a going back to the old ways, with slow boats taking stately turns around the race course out of sight of everybody for most of the time. 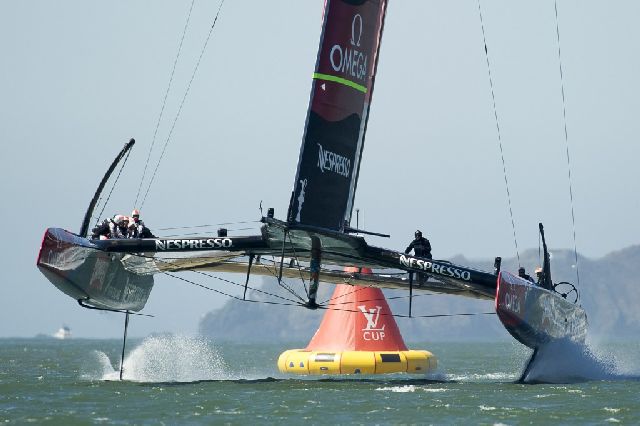 Foiling sailboats may not be for everyone – I certainly want one though!

Yesterday TNZ had won the only race to take place, in the freshening afternoon wind conditions. This moved them to within one race of winning the 34th America’s Cup against defender Oracle.

Half an hour later, just as the teams were racing over the starting line for the second race, the axe came down and the race committee stopped the proceedings as the wind had become too strong for these highly stressed racing machines, above the prescribed level for the race of 23 miles an hour. This forced the Kiwis to wait in suspense until today to see if they can clinch the series.

Not surprisingly Oracle have different views…“It’s not over; it’s a long way from over, ” said the Oracle skipper Jimmy Spithill in the media room of the America’s Cup official site. “Both teams would’ve liked to sail the second race, but Iain (i.e. Ian Murray, the Race Director) has to stick by the limits that are set.” 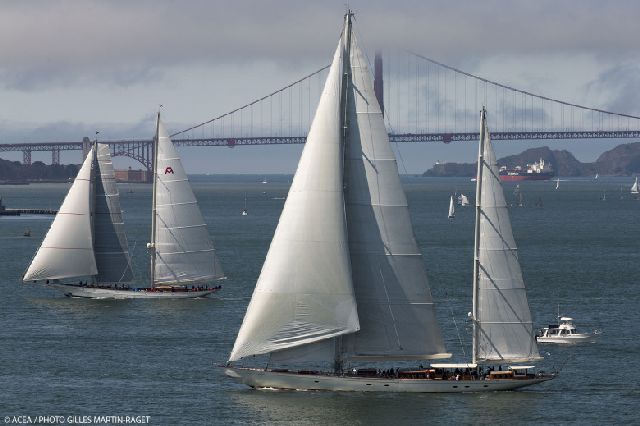 This is how sailing used to be, calmer and more soothing, at least in fine weather – but gone for good for sure now after this race series – whoever wins/ Gilles Martin Raget

We are now told the weather forecast should be fine for racing again today, at least at the beginning and in some ways quite similar to yesterday’s conditions, with mid-afternoon freshening expected. Indeed this is typical weather behaviour for San Francisco Bay for much of the year anyway. So we should be able to at least hold the first race which, if Oracle wins it, would then put the pressure back on TNZ again for the second race – if rising winds do not then force another cancellation. So many calculations to make, let alone sail these boats which are wider than a tennis court!

As Race Director Ian Murray puts it “It’s very similar to yesterday. The thing that is different is that we’re starting to head to flood tides” … “The tidal correction factor is only -1 mile an hour in the first race, but in the second it’s back up to -3 miles an hour (though of course he speaks in knots) So we’ll rattle on with the wind limits of 25.5 miles an hour and 23.5 miles an hour for the two races on the designated starting times.”

It is Oracle’s turn to have entry to the starting box from the port side which can give a tactical advantage as it can allow them to try to hug the line running up to the start closest to the line of the first mark, but let’s wait and see as the boats are not even on the water yet. 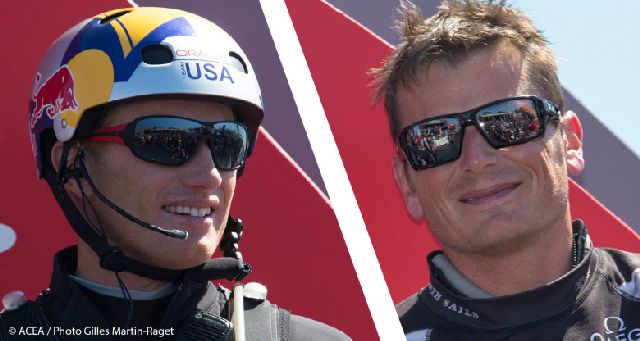 The American boat goes into the pre-start box with 90 seconds to the start and TNZ joins them pushing into their face. Oracle responds, and there is now only 25 seconds to the all clear call when Jimmy Spithill succeeds in hooking around TNZ forcing them to slow down. And he gets in front for Oracle to cross the line in the lead by four or five boat lengths -brilliant! Oracle really pounced early today and they clearly mean business as their survival in this series is at stake in this race – now they go around the first mark 5 seconds in front as well, or 90 metres. Let’s see if they can build on this lead without costly mistakes. These boats are travelling so quickly at 40 miles an hour so that one small mistake can cost them 200-300 metres, and win or lose a race.

TNZ is gybing downhill as they prepare to go round the second mark to go back upwind and there goes Oracle too, with one more to go to pass the mark. Oracle will head offshore as the boats split – which Oracle needs to avoid being pushed around tactically in close tacking duels, ignoring the stronger ebb tide inshore with TNZ instead taking the inshore route. Oracle has an eleven second lead now, beginning the upwind leg. Let’s see who excels in these spread out tacking duels, and who can go around each tack without slowing down as they jump from one hull to the other on the turn.

Now the two boats cross for the first time as they meet in the middle of the circuit foiling at 35 miles an hour upwind. But Oracle is still in front though, now with a 100 metre lead. 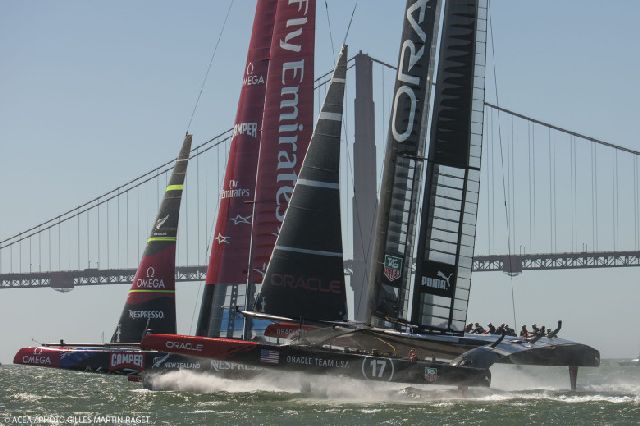 The future has already arrived and racing takes place now in three dimensions, including the vertical, not just two/ Gilles Martin Raget

The next time the boats cross the Americans are still in front and still have a 100 metre lead … now it is cut in half as TNZ find some favorable current or some extra wind, but Oracle still just in front. However Oracle are tacking so much more consistently than at the start of this race series, as all the time on the water has given them the experience curve effects they need. Oracle are now routinely zooming upwind on their foils just like TNZ – carrying 15, 000 pounds of boat completely up in the air on a foil the size of a California surfer’s surf board – and now are up to 150 metres in front.

The two boats now are coming up towards the third mark where they will turn to go downwind again and it is back to just a 130 metre lead for Oracle – who look well set though to set up for entry into the mark with one more tack. A perfect call as they head straight for the mark and turn in front of TNZ just 10 seconds ahead and they again both take different sides of the course for the downwind rush, just 100 metres apart. Amazing stuff, but everything must be flawless all the way down now for Oracle to keep this lead. The expert on the video feed is talking about achieving “stable flight”; this sounds a bit like NASA’s Mission Control to me. 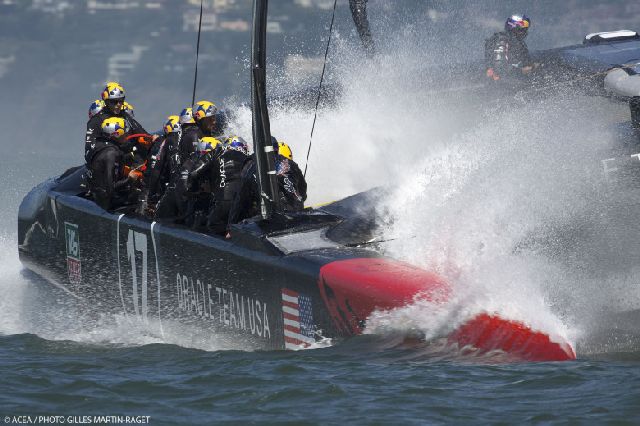 The Oracle team looks very cool, calm and collected with the onboard video cameras; they are very much in this race series still… 400 metres now separate these yachts as Oracle goes round the final mark and reaches across the wind to the finish line. TNZ come around 29 seconds behind and Jimmy Spithill has performed when it counted, which was right at the pre-start manoeuvres for position which they won big time.

The next race is race 13, due to start in 35 minutes as long as the wind cooperates. Both teams are changing their jib, probably to put smaller ones on to cope with the higher expected wind for the next race.

Oh sh–t though, now the start of the second race has again been postponed for excess wind and there are at lest another fifteen minutes before a possible start… look’s likely there will be a cancellation but let’s watch this space. After a couple more postponements the second race is now indeed cancelled. Bummer!

Well the game is not over until it’s over and today Oracle pulled out all the stops to win the only race we sailed today on the water, with the score now 8-4 races won and lost, ignoring Oracle’s two pre-race penalties.

So this series is still far from concluded as Oracle get accustomed to dodging a bullet, and may be enjoying themselves nowas there boat has gotten faster and faster. We resume racing again tomorrow – Friday September 20th for races 13 & 14, with the first race starting again at 1.15 pm Pacific Time. You can see the remaining schedule and other details at the official America’s Cup web site www.americascup.com, and we will be back Friday to report the race so do come back to join us. 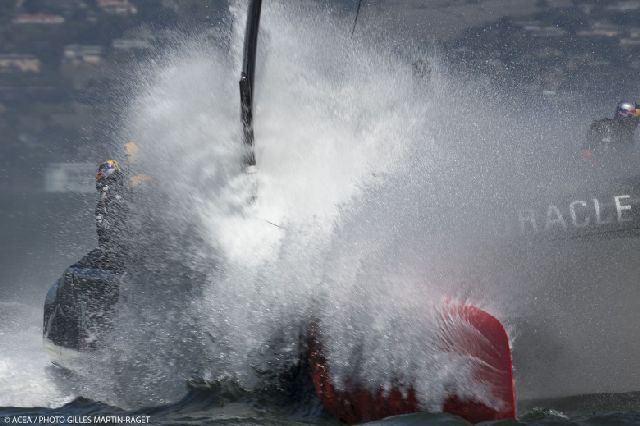 Look no hands, no visibility either……. / Gilles Martin Raget 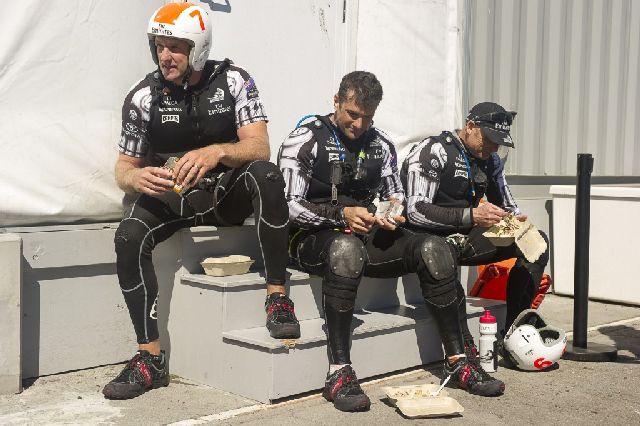 A box lunch for weary gladiators in between races