Levin announced that will be leaving his post as head of UBM, the international events organizers in 2014. 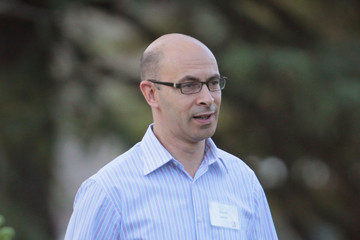 David Levin CEO of UBM, one of the World’s largest events organizers and information transfer specialists has announced that he will be stepping down from his post, which he held for the past eight years. He will be leaving sometime in 2014, when a replacement is found.

In a statement announcing his intended departure Levin explained that he felt that the time was right look for his next challenge.” I look forward to the future and, in the meantime, it is business as usual, ” Levin hastened to point out.

UBM‘s Chairperson Helen Alexander was taken upon herself to find the right person as Levin’s replacement, and has been given a generous amount of time to do so. In the meantime, Ms. Alexander has only praise for David Levin’s ability and efforts, stating that in his time with the company he has led the remarkable transformation of UBM into a focused, international events-led marketing communications business, particularly during a time of huge change in the media industry, whilst successfully laying solid foundations for UBM’s next phase of development, .

“David will remain in charge and we are working closely together to ensure a good handover when the time comes, ” Ms. Alexander went on to confirm.

According to industry analysts UBM’s two core businesses, Events and PR Newswire, continue to offer significant opportunities for growth, either through expansion or by acquisition. During David Levin’s tenure the company made over 100 acquisitions while selling off a number of print titles including Music Week and The Publican. Levin was also behind the expansion of the company into emerging markets, in particular as China, India and Brazil, as well as promoting considerable expansion into the United States.

During Levin’s eight year tenure at UBM total shareholder return rose by 89 per cent while its share price climbed 37 per cent, with a total of £900 million was being returned to shareholders.

On the news of his decision, shares in the UBM group took a minor step backwards dropping by 1.2 per cent yesterday on the news, closing at £7.37 on the financial times stock exchange.

David Levin was born in Salisbury, Rhodesia (now Zimbabwe). Levin’s father, a political journalist, decided that it would be prudent to leave the country in 1965 when it declared unilateral independence from the British Commonwealth.

The Levin family was given a form of political asylum in the UK where David went on to earn a degree in Politics, Philosophy and Economics from Oxford University in 1983, later going on to gain an MBA from Stanford University

David Levin has been involved in the information, technology and media sectors since 1994, initially employed by the UK-based private equity group Apax Partners, Euromoney Institutional Investor, where he held the role of Group COO and Group CFO, later working for the international consultancy firm Bain and Company, initially in the United States and later in Asia.

Between 1999 and 2002, Levin held the post of CEO of Psion, the handheld computing company, leaving them to joint Symbian, a mobile phone software licensing company with the company being responsible for building the operating system that powered the first generation Smartphones

Levin is married to Lindsay Levin, founder and managing partner of Leaders’ Quest, a well-known and regarded social enterprise. Levin’s brother Jeremy is the CEO of Teva Pharmaceutical Industries, the largest Israeli company in the sector.