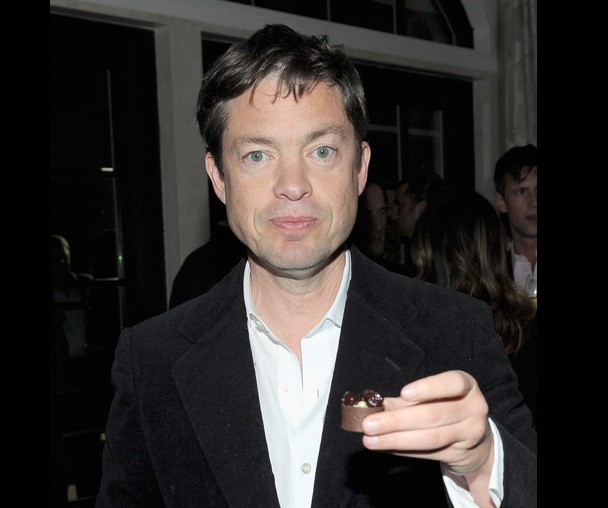 The hyper-restless, globe-trotting, German businessman Nicolas Berggruen, who rescued the leading German department store group Karstadt from insolvency in 2010, has just made a new deal to inject some new money into the Karstadt business, which appears to be continuing to suffer from poor trading conditions.

Austrian property group Signa, controlled by magnate René Benko, has agreed to purchase 75.1% of Karstadt’s luxury goods division, which is comprised of a number of flagship Karstadt stores including the famous KaDeWe store in Berlin. Hamburg, Dresden and Frankfurt are also within this grouping.

Signa has also agreed to purchase the 28 stores that comprise Karstadt’s sporting goods division. That leaves Berggruen with 100% ownership of the remaining 83 Karstadt regular department stores and 24.9% of the luxury division.

In an unusual twist Berggruen will not receive any money from the sale, but both parties have agreed to inject US$400 million of new money into the Karstadt group as a whole, the majority of which will come from Benko. Presumably this means the money will go into a Karstadt Group holding company, though quite how this is done if Benko puts up most of the cash without diluting Nicolas Berggruen is a good question. I would certainly love to see the full structure of the deal, though, but as both parties are completely private companies this material is quite unlikely to be disclosed.

I suppose if the luxury division was carved out as a separate subsidiary then this could be accomplished by the holding company selling new treasury shares in it to Benko. I wonder though how you attribute group costs thereafter with a split shareholding, and especially buying costs. 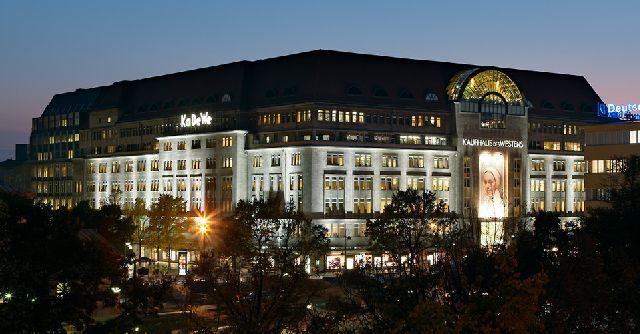 Berggruen said his focus now was on the remaining 83 department stores, for which he saw “good growth opportunities”, and on agreeing a new pay deal for employees, whose union has already expressed concern about what they term the “break-up” of assets.

As a private company Karstadt does not publish any financial statements, but German newspapers had previously reported sales had dropped by around 10 percent in the first six months of their business year, which ends Sept 30th. Its departing CEO, however has apparently also said that sales were up again in August. The next month; the next quarter; – these do not make or break a company; however, a trend-line of solid response to a successful strategic direction can.

Karstadt has had a long and proud history as the most famous of German retailing groups, with department stores seemingly everywhere in all the major downtown German cities. All stuffed with an overflow of goods in its multiple departments and providing wonderful customer service. This model of retailing went out of style in North America forty years ago with the rise of suburban shopping malls and big box stores, all emphasizing price and convenience at the expense of service. In recent times this philosophy has begun to invade Europe too and, finally, even Germany itself. As a result Karstadt has suffered heavily along with Germany’s other department store chains and has struggled to adapt with its overweighting of massive stores in downtown “high-street” locations. 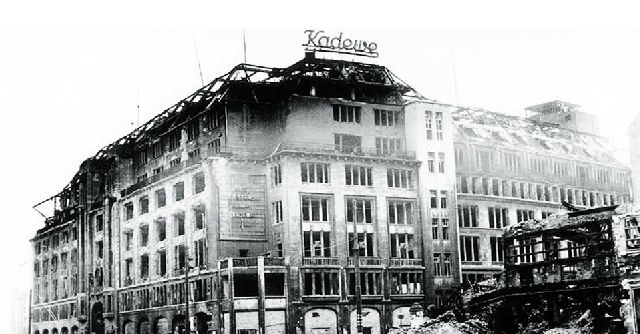 In rescuing the company from insolvency in 2010 Nicolas Berggruen has undoubtedly had an eye on the underlying values of some of its real estate, especially the flagship stores, to the extent these were not sold off and rented back with the insolvency. And so has René Benko, too, who tried unsuccessfully to buy another German department store chain Kaufhoff himself in 2010. Now they are cooperating in turning Karstadt itself around together.

The KaDeWe Berlin store was historically been one of Germany’s most important department stores, situated as it is in the middle of Berlin, where its presence goes back over 100 years. “Kaufhaus Des Wessens” or simply KaDeWe stands for “Department Store of the West”, and it was Jewish owned as part of the Hertie Group until the Nazis forced a sale in the early nineteen thirties, coming into the Karstadt Group itself finally in 1994.

The man who managed KaDeWe just before the Nazis took over was this writer’s adopted uncle, and he used to tell wonderful stories about that whole era, until he was forced to flee from the Nazis and become a refugee to England himself. Even years later his eyes would light up as he recounted the business tales, the fashions of the time a good deal of which he was responsible for, the beauty of its women and overall Berlin’s then cultural dominance in Europe. All to come to naught…. and now rebuilt under much more well-founded political arrangements, as Berlin has indeed found its place again.

Totally destroyed in 1943 when a US plane crashed into it the KaDeWe was re-built in the nineteen fifties exactly as it was, though of course since it has been much upgraded and modernized several times. Its website today is so important for online shopping it is even set up in both German and English. 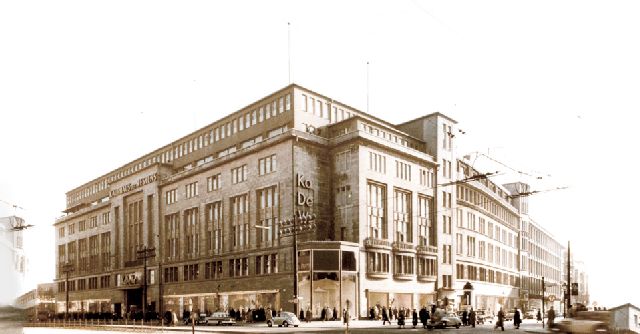 Nicolas Berggruen is worth US$2 billion according to the Forbes billionaires list as at September 2013. Today he is the Chairman of Berggruen Holdings, a private company, which has operations in the U.S., Europe, and Asia, as well as business, real estate and financial investments globally. The Berggruen Group operates out of offices in New York, Berlin, Istanbul, Tel Aviv and Mumbai.

Nicolas Berggruen has also established the Nicolas Berggruen Institute, an independent, non-partisan think tank, which encourages the study and design of systems of good governance suited for the 21st century.

Recently for one of his latest ventures Nicolas Berggruen, and a business partner Martin Franklin, floated what is called a “blank check” company on the London Stock Exchange just in May of this year. Blank check companies raise money to make acquisitions in advance of actually having targets specified, and do so purely purely on basis of trust that is placed in their promoters’ capabilities. Platform Acquisition Holdings, as their new vehicle, or indeed “platform” is called, is now shopping for a target company that has “an enterprise value of between US$750 million and US$2.5 billion” according to the company. Good luck indeed.

Nicolas Berggruen is also the developer, together with local group Hagag, of a beautiful needle shaped luxury apartment building on the Rothschild boulevard in Tel Aviv, that is now nearing completion. Designed by Richard Meier it is intended to epitomize the arrival of Tel Aviv on the world scene as able to offer the best of modernism in its living spaces. With a very strong Bauhaus building tradition behind it since the nineteen thirties, it has actually always had that unrealized potential. 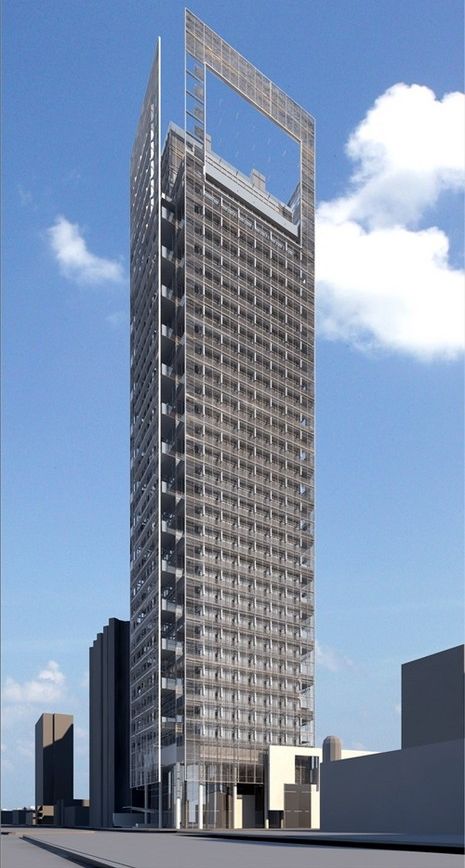 Born in Paris, in 1961, Nicolas studied at L’École Alsacienne before attending Le Rosey in Switzerland. He later obtained a Bachelor of Science in Finance and International Business from New York University in 1981, and then cut his teeth in the world of finance at Bass Brothers. Today he holds dual German and American citizenship. In 1985 he launched Berggruen Holdings to manage the family fortune amassed by his father, an international art dealer who assembled a very important collection of works of modern art by artists such as Pablo Picasso and Paul Klee after World War Two.

In the process he obviously has inherited his father’s passion for art, owns pieces by Warhol, Basquiat and Koons and sits on the boards of the Museum Berggruen, Berlin, set up in Berlin by his father’s gift, and the Los Angeles County Museum of Art, and is a member of the International Councils for the Tate Museum, London and the Museum of Modern Art, New York.

The rest of the world who know him call him the “homeless billionaire” for an endlessly peripatetic lifestyle of constant travel, without even owning one single residence of his own where he can just put his feet up, unwind a little and call it “home”. He would be the perfect example perhaps of the “Wandering Jew” – except that only his father was Jewish, with his mother being Catholic. Berggruen has also said he plans to give all his wealth away some day.

His father was Heinz Berggruen, a Jew who lived in Berlin and fled to the United States from the Nazis in the 1930’s eventually settling in Paris, where he built one of the world’s most important art collections. His mother is the German actress Bettina Moissi who became Heinz Berggruen’s second wife in 1960. In an interview with Der Spiegel in 2007 Nicolas said his father was not a religious man, he was more interested in culture, and went on “My mother is Catholic, my father Jewish. I’m actually both. But I would not call myself a religious person”.

The Berggruen Museum in Berlin

The Berggruen Museum, also known as the Berggruen Collection, is a collection of modern art classics in Berlin, which the collector and dealer Heinz Berggruen, in a “gesture of reconciliation”, gave to his native city in 1996 for a price well below its actual value. The most notable artists on display include over 100 works by Pablo Picasso, 60 works by Paul Klee together with other important works by Alberto Giacometti, Georges Braque, and Henri Matisse. Nicolas’ father finally died in 2007 at the ripe old age of 93 and was buried by his own personal wish in the forest cemetery in Waldfriedhof Dahlem, in Berlin – a second act of reconciliation with his roots.

At the age of twelve, Nicolas declared personal independence and at his own request was enrolled in the exclusive Le Rosey boarding school in Switzerland, where he read Marx and Lenin, Sartre and Camus, communists, existentialists — mostly left wing authors. “I was very, very, left-wing, ” he said in a later interview with Der Spiegel two years ago, “a real rebel.” A Marxist in one of the most exclusive private schools in the world – something he could say completely without sense of contradiction….. only the really rich can have sufficient detachment from existential struggle perhaps to be true Marxists.

Berlin’s Mayor Klaus Wowereit (R) –  attend the funeral of Heinz Berggruen at the cemetery on March 2, 2007 in Berlin / Getty

In a way perhaps, by endeavouring to reconstitute the Karstadt Group Nicolas Berggruen is connecting deeply again with his father’s roots, including his Jewish roots, possibly even in a not entirely consciously acknowledged way. His father’s Museum Berggruen is in Berlin, as are many of his own property investments now and the jewel in the crown of the Karstadt Group is of course the KaDeWe itself. It probably must have hurt a good deal inside therefore to give up 75% of this particular store to Rene Benko, though if they both succeed in turning the whole business around doubtless it will no doubt be worth it.

In this article:Tel Aviv, Germany, Finance