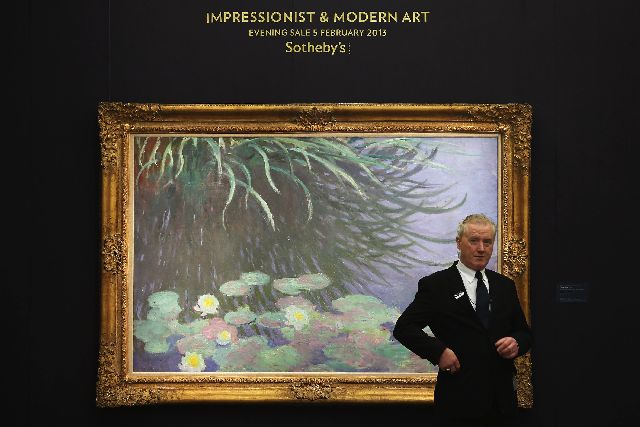 Two weeks ago we reported in this newspaper that Daniel Loeb had picked up a substantial position in Sotheby’s the publicly listed art auctioneers, and was potentially seeking a dialogue with management and its board to stir things up a bit. Since the shares have risen 50% in the last year, though, it is not as if they have been a basket case lately – indeed quite the contrary.

However sitting as it does on exceptionally valuable corporate real estate in New York, at the corner of 72nd Street and York Avenue, and on Bond Street in London Sotheby’s, which has no really large controlling, or simply blocking, shareholders could be something of a sitting duck.

On top of Daniel Loeb’s own, now reported shareholding another recent Sotheby’s SEC filing indicates that west coast hedge fund Marcato Capital Management, founded and run by Richard McGuire, has also recently picked up a 6.6% position. Actually this is even a little larger than Loeb’s so far reported 5.7% stake. Both parties could even have bought more since these filings were made.

Nelson Peltz of Trian Management is also rumoured to have bought shares. And Morgan Stanley is indicated in an earlier Sotheby’s filing to have bought a 5% stake in July, of which it was reported to be the beneficial owner. It is not clear if that holding is still outstanding for its own account or was for the ultimate benefit of others, possibly including Marcato, Peltz or Loeb. Even so these stakes all start to add up.

Nothing seems to concentrate the minds of corporate America these days as much as expressions of interest coming from “activist” investors. We used to call them “greenmailers” or “corporate raiders” in the old days, terms which were at least clear as to their true motives, which are after all simply to make a quick buck and usually then get out. Nowadays, though, the sanitizing power of language is used to make them seem all warm and fuzzy instead, as when we term them instead as “activists”.

In the same way many individuals committed to violence against the status quo in several parts of the world, whom we used to just call terrorists are also now ennobled as “activists” or “militants”. It seems it all simply depends on which side of the table you sit.

Be that as it may, Sotheby’s response to Messrs. Loeb, Peltz, McGuire and perhaps also Morgan Stanley coming to call has been electric. In an SEC filing yesterday they tersely announce:

“On September 11th, 2013 Sotheby’s issued a press release announcing that the Sotheby’s Board of Directors is conducting a thorough review of the Company’s capital allocation and financial policies as part of the Company’s ongoing commitment to deliver exceptional shareholder value. The results of this review are expected to be presented to investors in early 2014.”

Fair enough, but the accompanying press release itself is much more voluminous and quite long-winded, perhaps indicative of some of the stress they obviously are feeling.

As an exercise in understanding corporate-speak it is very much worth while focusing on a few excerpts from the press release, a little bit. It starts with the same announcement as in the body of the SEC filing itself, above. Then the press release continues:

“During the past several years, Sotheby’s prudent management and strong financial performance has generated meaningful capital, which the Company has used to invest in strategic initiatives, strengthen the balance sheet, and build adequate liquidity to pursue transaction opportunities such as lending and auction guarantees. This strong performance and stewardship has also driven a share price increase exceeding the Standard & Poor’s Mid-cap index over the one, five and ten year periods.”

So the whole paragraph above means to say simply “we have done a good job”, which they probably have if their statistics are accurate. However the release continues:

“A robust capital allocation review is the natural next step of the Company’s ongoing efforts to optimize the balance sheet, improve the cost of capital and manage financial policies in a way that supports Sotheby’s strategy and delivers outstanding value to shareholders.”

It is not entirely clear on its face what the paragraph above actually means, but if one were cynical it could be a prelude to something like “if we have to we will now strip out all the real estate and give the cash back to the shareholders in order to get some peace”.

Then in the press release the company’s Chairman and Chief Executive Officer, Bill Ruprecht, is directly quoted as follows:

“As a practice, management and the Board have consistently focused on building long-lasting value for our shareholders and a platform to grow the business in a challenging and ever-evolving marketplace. As we have disclosed in the past, we continue to evaluate return of capital strategies, including potential share repurchases and/or an increase in dividends, while balancing the need to invest in the future of the Company and the Sotheby’s brand to strengthen our competitive position and improve the unique services we provide to our clients.

“In that context, our assessment will take into account some key considerations including, but not limited to, the potential use of incremental debt to fund segments of our operations, the Company’s credit rating, ongoing funding requirements for certain strategic initiatives both announced and contemplated, the value of our real estate properties and our unique premises requirements, and the potential tax implications of any of the actions we are considering, ”

There you have it, in the final sentence – it is all about the real estate, though the Sotheby’s CEO manages to continue to waffle further for several paragraphs more to cover this up.

According to estimates by financial analysts quoted in Forbes yesterday, the excess real estate value hidden in their New York and London headquarters alone could yield up something like US$700 million, even after relocating to more modest but still effective locations.

Lets see what happens next; it is a shame Mr. Ruprecht seems to be rolling over so easily though – a good fight would be much more fun. On the other hand by saying nothing he has now very cleverly bought himself some time, until “early 2014”, to go and find a higher priced alternative. This could include even a corporate white knight to take the whole company, if there still are any who ride around in this digital era. As a good auctioneer, indeed, getting the best  price for a valuable work is something Mr. Ruprecht certainly knows all about.