Oracle Team USA started today 4-1 races behind on the water, with an additional 2 race penalty against them, so they were really up against it. But Emirates Team New Zealand again raced superbly to win both races, showing great teamwork in their very fast foiling AC72 catamaran, especially sailing upwind. So now they lead on the water by 6 races to 1. Read on for the full story. 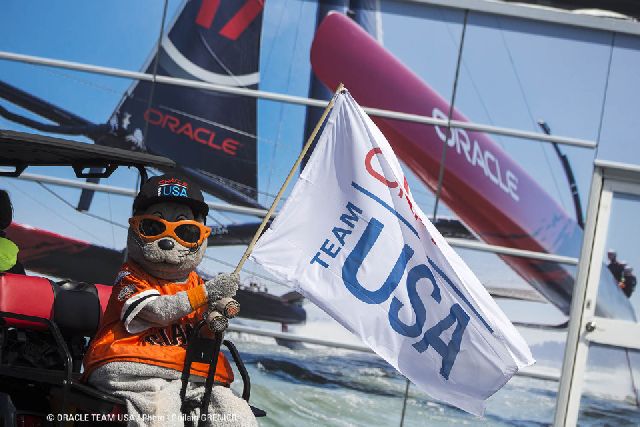 Somebody is a fan of Oracle Team USA / Gullian Grenier

The America’s Cup Series gets under way again today on San Francisco Bay in the amazing flying multihulls the AC72s. The resumption of racing comes after Larry Ellison’s Oracle Team USA (Oracle) had called for a 48 hour tactical postponement, after losing their cool completely on Tuesday with some poor tactical choices when leading down to the second mark in the first race of the day. They then went on to lose the race, to go 4-1 down in the series against Emirates Team New Zealand (TNZ). Either side can request such a postponement just once.

While TNZ had a welcome day of rest on Wednesday therefore, basking in their success just a little no doubt, Oracle were out on the water in training mode to sharpen up their overall team reflexes and coordination, and also to try to find a way to get some more speed out of the boat upwind, which has been their Achilles heel thus far. Downwind they have proven superior to TNZ early in the races, but actually gave up the lead in all the races they have lost on the upwind legs, with relatively poor boat speed. Oracle has also shown relatively inefficient tacking as well, losing speed dumping both hulls into the water at the start of each tack, whereas TNZ has seemed able to always keep one hull flying on the turns, which is no mean trick. 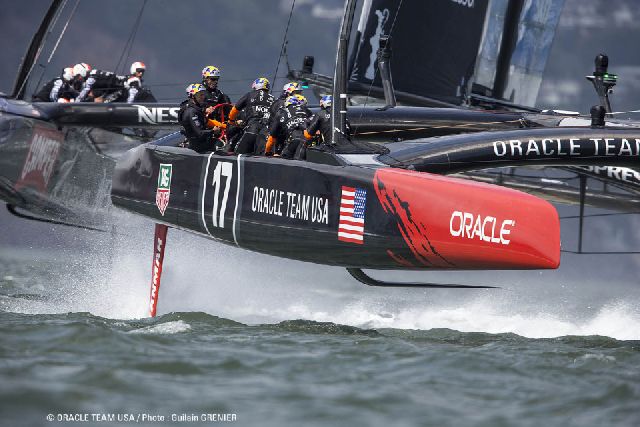 Spotted during Oracle’s training yesterday was English four time gold medal winning Olympic sailing superstar Ben Ainslie in place of tactician John Kostecki, whose place on the yacht for today’s racing was then placed in question. Some of Kostecki’s tactical choices had been seriously criticized by commentators during the previous race on Tuesday. Ben Ainslie has thus far been skippering Oracle’s second practice AC72 – yes they really do indeed have two – so he is fully up to speed on the capabilities of these yachts.

When the team roster for today’s racing was finally announced this morning this has turned out to be so and Ben will now sit side by side with skipper Jim Spithill. “We’ve decided to make a change in the back and bring Ben Ainslie onboard, ” Spithill said. “While making crew changes has always been an option, we understand there’s a risk that comes with it. JK is a great teammate and a tremendous asset to our program, and he is supportive of the decision.”
Ainslie, a four-time Olympic gold medalist, moves into the position filled by John Kostecki, “JK, ” through the first five races of the regatta.

“It’s a tough decision to make, but I’m happy to step up and do what’s best for the team, ” Ainslie said. “I have a huge amount of respect for JK and really appreciate his support in making the transition.” 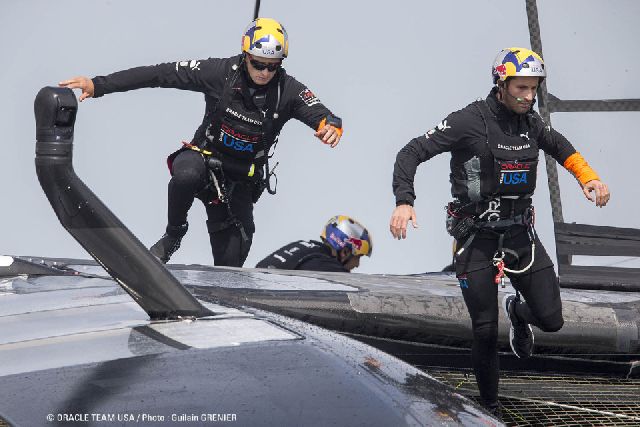 So much for the personnel dramas, now we are all getting ready to lean into today’s racing itself. The weather is again glorious, and out on the course the winds are a, medium paced, 20 miles an hour coming up to the first race with a moderate flood tide streaming in from the Golden Gate Bridge. For Oracle there is everything to play for, as two wins today would make this a horse race again and redress some of their deficit. If TNZ should prevail again then much of the fight will have gone out of the contest.

The first race kicks off at 1.15 pm Pacific time, and as we get ready for the start both yachts are now manoeuvring for position in the “box” an area of water in front of the start line, like eagles getting ready to attack their prey, from which they go for the line when the start is called, hopefully blocking their opponent at the same time if they can. The wind is only 15 miles an hour at the moment with a moderate flood tide coming in from the Bridge – this might favour Oracle as conditions over the whole course will be more even than before. Tricky wind conditions are shifting, so reading the wind might win or lose the race. 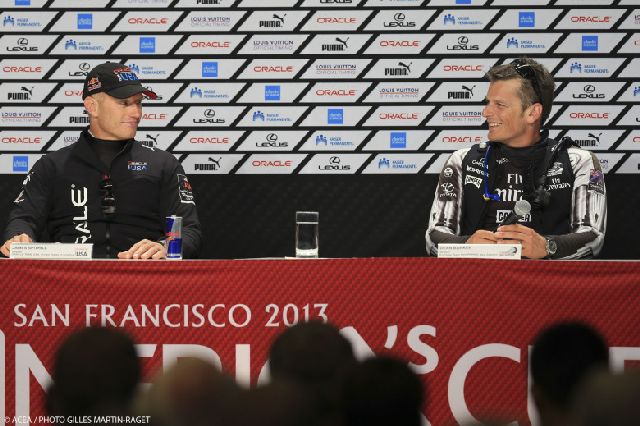 All smiles for the team skippers at the press conference, out on the water though things are much more intense / Gilles Martin Raget

Ben Ainslie in charge of tactics has a job on his hands, and as the count down begins they are now racing towards the start line with Oracle in front by four or five boat lengths already by the start, and more by the first mark as Oracle extends its lead up to about 100 metres in front. This is then cut in half at the first gybe (i.e. change direction going down wind) as TNZ gybe so much more smoothly. Both boats are gybing down the course to set up for the second mark and Oracle doing a bit better. The boats are apart now on separate parts of the course, then converge on the second mark with Oracle going through first again by 12 seconds, and the boats head apart on the upwind leg.

Great racing, I wonder who is going to have to budge when the boats tack across each other in a few moments. Oracle loses the lead, but on the next tack (changing direction going upwind) they get the lead back again…by just 50 metres. Both boats are sailing upwind at 24 miles an hour in the moderate winds we have today. As the boats come together again who will pass in front? TNZ forces Oracle into a turn down by heading straight at them on the starboard tack, where they have right of way. Great stuff!! Now where are we? it has been closer racing today so far on the upwind leg, but Oracle loses out again on more of these tight competitive tacks and TNZ is building a lead again to the third mark, after which TNZ can then consolidate their lead on the final downwind leg. Nine tacks each so far with TNZ now five boat lengths in front after trailing earlier. Brutal race tactics though from TNZ forcing Oracle to keeping tacking, knowing they are not quite as good at it, and so TNZ eventually come through the mark ahead by 200 metres and 44 seconds in front – going down wind it should be hard now for Oracle to catch up. So far it again looks like they have been out-sailed by TNZ as both boats charge down wind at over 50 miles an hour. Unless they make a mistake this race is over… The boats go through the final mark with TNZ 35 seconds ahead as they head for the finishing line with TNZ 47 seconds ahead at the finish. Great sailing but very disappointing for Oracle who are now 5-1 down in the series so far, even ignoring the pre-series penalty. Hang in for the second of today’s races in about half an hour starting at 2.15 pm Pacific time… 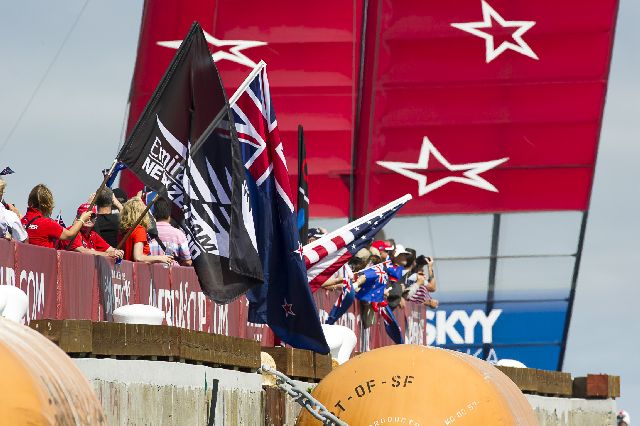 Race 7 is now getting ready to start with both boats in the pre-start box 1 minute to the count down. Oracle and TNZ stay pretty even coming up to the line; 10 seconds.. all clear and we are racing again in Sand Francisco Bay! Around the first mark this time it is TNZ that builds a small lead afterwards and off they go down wind. Both boats gybing downwind to deal with wind shifts in the 24 miles an hour wind. Oracle still a bit behind as they aim for the second mark, and afterwards both boats are now heading up wind close to the shore. Oracle makes its first tack to split from TNZ and lets see how it works out. Both boats heading over to Alcatraz Island right now and it is just beautiful to watch. TNZ tactics are to push the Americans out into the current moving against them; they are doing it very well too. The on board cameras show everybody is working extremely hard grinding away on the winches. Oracle now 210 metres behind. More of the same in this race as in all the others before it. The TNZ boat is a very fast boat upwind indeed as Oracle are otherwise now sailing quite tidily both in their tactics and sail/wing/hull/foil handling. The Golden Gate Bridge looms now from the distance with TNZ well ahead now and unlikely to lose this race as they go through the third mark 400 metres in front and by over 50 seconds. The second downwind leg will now be a walk in the park for the Kiwis as they bring the boat home. By the final mark Oracle trails by over 800 metres as TNZ sail around it and home to the finish at 44 miles an hour. Game over, for today at least! 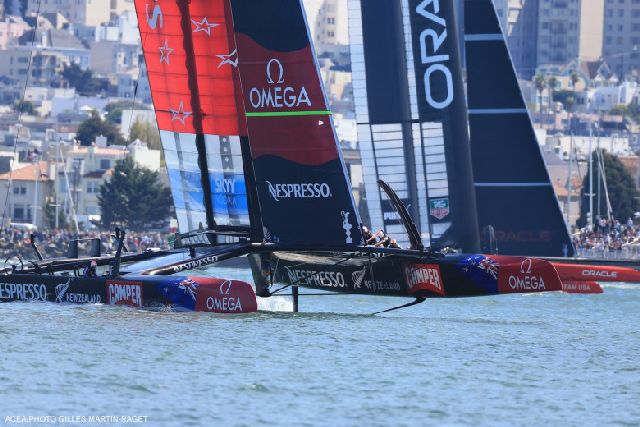 So after today’s two races Oracle Team USA now trail Emirates Team New Zealand by 6 races to 1 out on the water, ignoring the 2 race penalty they have for rules violations by some of their staff last year, and the superb sailing Kiwis only have to win three more races now to take home the trophy. Amazingly one sided, which is a shame for all the hard working guys in the Oracle team, on and off the course, who have put their heart and soul into this racing series from Larry Ellison on down.

The next two scheduled races, races 8 & 9, will now take place on Saturday September 14th, with the first of them again kicking off at 1.15 pm Pacific time. You can check out the daily schedule for the rest of the series on an ongoing basis at The America’s Cup official web site: www.americascup.com. We will of course continue to cover the series here at Jewish Business News, for a series that could be over by Sunday if Oracle don’t find something magical to come back with and turn this around. 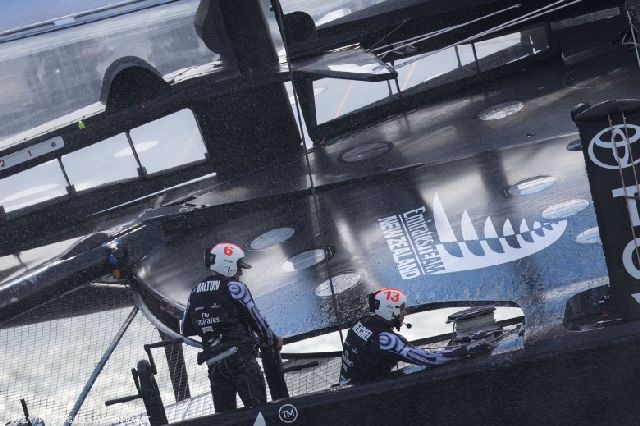