Today we saw the third round of this 2013 America’s Cup series between Oracle Team USA and Emirates Team New Zealand. Two more races around the same five leg course, with two long downwind legs, one long upward leg back out towards the Golden Gate Bridge and two short reaching legs, one at the beginning and with the last one bringing the boats back to the finish line between the city’s piers 27/29 in downtown San Francisco.

Alcatraz Island also looms in sight for much of the race, and with helicopter cameras all over the place the footage has been intense.

On Sunday we saw some very tight racing between these 15, 000 pound incredible flying machines on San Francisco Bay, competing at well over 40 miles an hour – in the second race on Sunday Oracle Team USA was clocked actually exceeding 54 miles per hour at one point in the race. 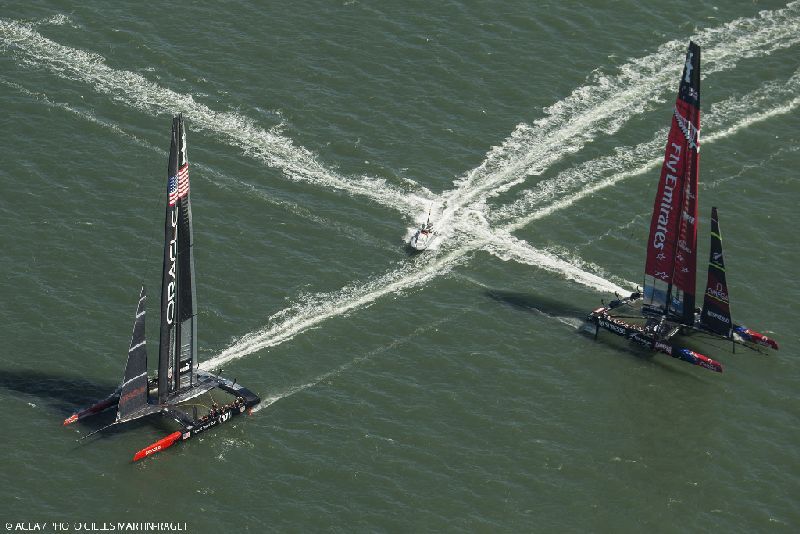 Today was a gorgeous sunny day in San Francisco and, with healthy 20 miles an hour winds initially, there was a slight chop on the water and a strong current coming in from the golden Gate Bridge. As the day’s first race started (the fifth of the series) it was again Oracle Team USA that came out of the blocks in front to go round the first mark ahead with Emirates Team New Zealand close behind them. Oracle Team USA then led by a short distance on the long second leg showing its downwind speed, but then make a major tactical error going around the next mark which effectively cost them the race. Somehow they ended up in the worst part of the current now flooding against them as the boats tacked their way upwind back towards the bridge, letting Team New Zealand pull clear away from them to then lead all the way to the end, finishing over one minute and 1500 metres ahead of their dejected opponents – a decisive victory putting them 4-1 up in the series so far. In half an hour we should have the next race. 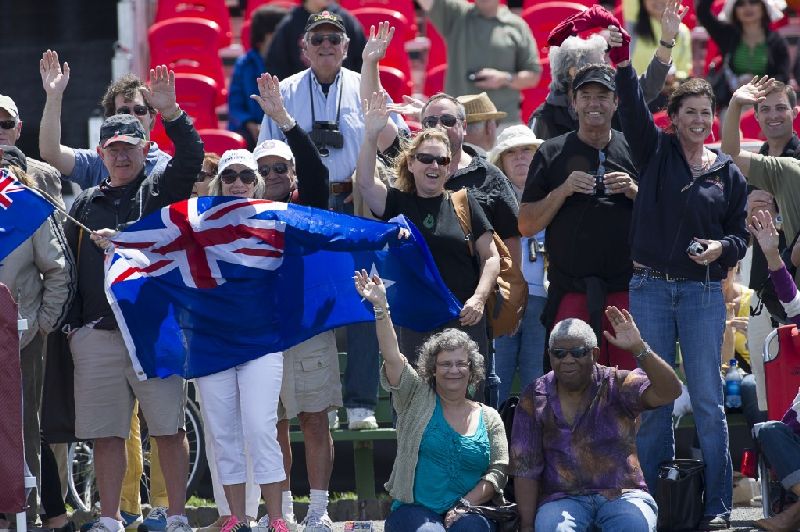 These Must be Emirates Team New Zealand Supporters

For the second race the wind has now picked up to over 25 miles an hour so smaller jib sails will be installed to keep the front of the yachts controllable when they are tacking – which is their sole real purpose in fact. The higher wind is getting close to the race wind limit, given the loads high winds pose on these machine, which are designed for speed rather than durability – they can travel at up to three times the wind speed.

A few years ago an old-fashioned monohull America’s Cup yacht even broke in half in comparatively light winds, for the same reasons.

However at the last moment as the yachts were circling around before the start Oracle Team USA has now called a timeout and asked for a postponement, and there could even be something wrong with their boat. Astonishing!

So no more racing today. Each side can do this once during the race series.

So for the day it stays 4 to 1 for Emirates New Zealand in the series so far – and with Oracle Team USA not sailing well and calling for the time out, at this point it looks a pretty tough task for Oracle Team USA to catch up. 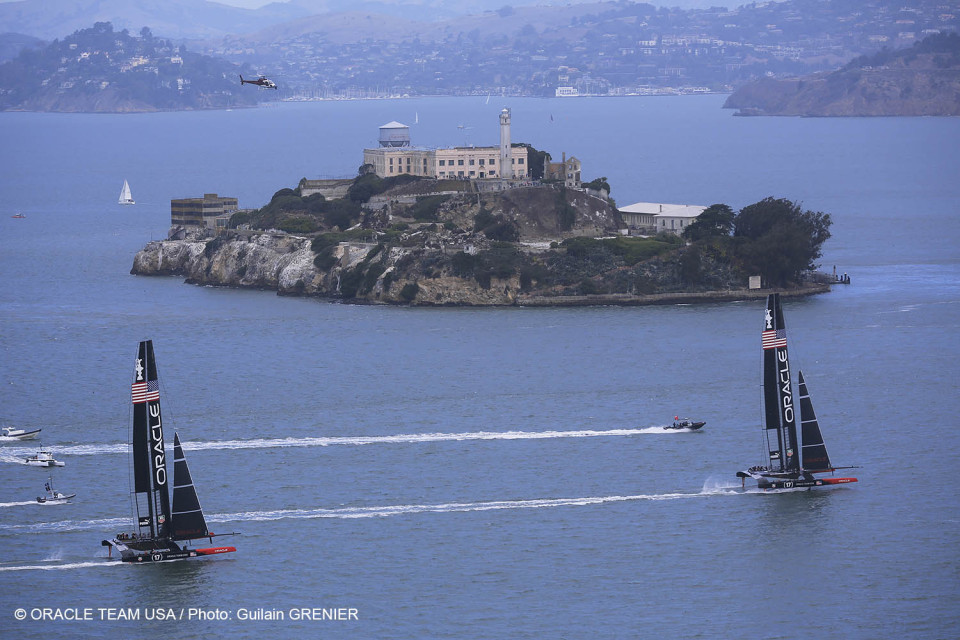 To win the event the challenger Emirates Team New Zealand needs to win a total of nine races out of the maximum seventeen possible race series. Oracle Team USA however actually need to win eleven after receiving a pre-series two race penalty for design cheating by some of their staff last year. If it does go down to the last race this will take place on September 21st, 2013. 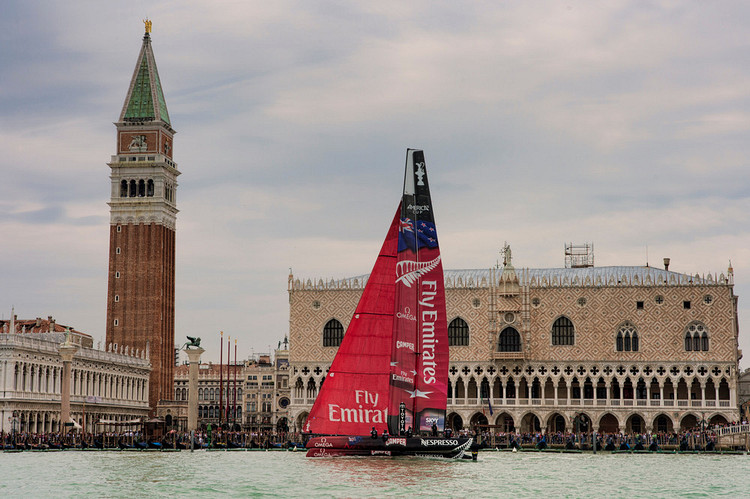 These seventy two foot cats should not be flying above the water at 50 mph, but that is what they are doing. Emirates Team New Zealand was also clocked at 54 miles an hour today. We have already seen the impact that technology has had on world sport. In tennis for example new techniques of racket construction and very powerful strings have completely changed the sport in the last few years. Now grand slam champions can no longer just be great “touch” players of the game, they have to be champion athletes as well ready to duke it out for five hours at a time, sometimes in hot and humid conditions. The same is happening in sailing; the teams on these America’s cup yachts are all experts in the gym as well as on the boat and teams are rotated like the members of a top ranking hockey team.
Meet the two skippers… 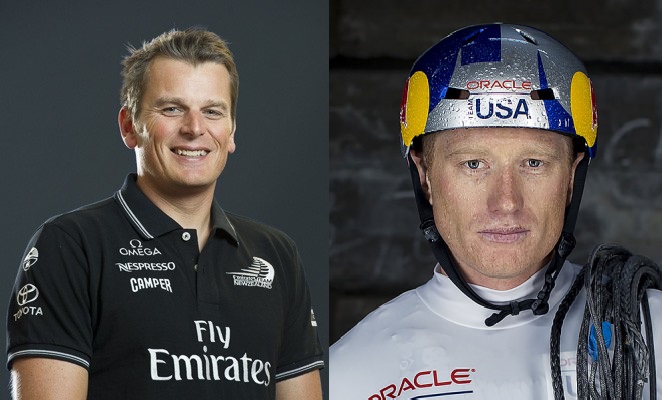 The next two scheduled races will take place a day later than planned, now on Thurday September 12th, as a result of the postponement requested by Oracle Team USA, with the first of them again kicking off then at 1.15 pm Pacific time. The missing race called off from today will ultimately be fitted in to the revised schedule some where as well. You can always check out the revised daily schedule for the rest of the series at The America’s Cup official web site: www.americascup.com. We will continue to cover the series here at Jewish Business News as it happens.