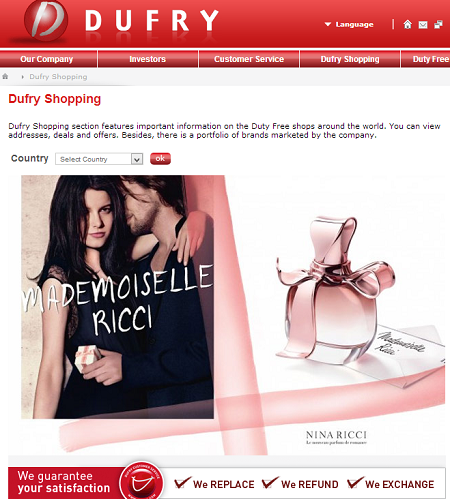 Swiss publicly listed travel retail group Dufry AG announced yesterday it has now signed long-term contracts at three more airports in Brazil. First in the business capital of São Paulo; second in Brasilia the country’s political capital; and then also in Natal in the Rio Grande do Norte, up in the north of the country, for the operation both of duty free stores within the customs zone and also duty paid stores in the un-controlled general public spaces of the airports’ terminals.

Under the terms of the ten-year contract Dufry will operate 220, 000 square feet of retail space at these airports, in partnership with local industrial group Brasif, once expansions of the facilities are complete.

In a statement Dufy said the contracts “will allow Dufry to substantially strengthen travel retail in Brazil and to capture the true potential of the Brazilian airport retail business.”

The new agreements will add to Dufry’s expanding portfolio in Brazil, which already included a ten-year contract signed in April with the Viracopos airport serving the city of Campinas.

The CEO of Dufry, Julian Diaz, commented: “The prospects in Brazil for infrastructure investments are enormous and the airports are only the forefront of the changes to come in Brazilian transportation infrastructure. The new joint venture will allow us to build a stronger platform for further growth in Brazil and to develop new travel retail channels and segments on the duty free side.”

Dufry has 1, 400 airport locations in 47 countries around the world, employing some 17, 000 people. With annual revenues of over US$3 billion and a market cap of US$3.7 billion it is a substantial company.

As part of a consolidation process in the travel related industry, in 2008 Dufry had merged with the retail business of the Hudson Group, formerly owned by James Cohen and his father Robert who passed away in 2012 at the age of 86. In what turned out to be a preliminary round before the main event, in 2007 a majority stake in Hudson had already been sold to giant private equity firm Advent International. At the time Advent also held a controlling voice in Dufry through a number of its international funds, so later putting Hudson together with Dufry was itself very much a natural fit that seems to have worked out seamlessly.

At the time Hudson had annual revenue of about US$$630 million derived from over 550 newsstands, stores and coffee shops in airport location across the United States and in Canada. James Cohen today sits on the Board of Directors of Dufry, and according to Dufry’s 2012 Annual Report a company which he owns 100%, Hudson Media Inc, is reported as holding 3.89% of Dufry’s shares.

In this article:retail, Brazil, Finance, Airport