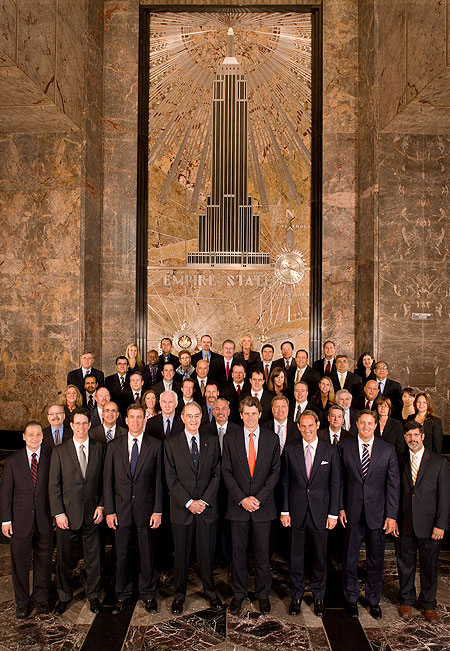 Senior members of the Malkin Properties team in the lobby of the Empire State Building. The Building was acquired in 1961 through a syndication led by Malkin Properties co-founders Lawrence A. Wien and his son-in-law Peter L. Malkin/Source company website

On Friday Malkin Holdings formally announced, through a regulatory 8-K Current Report to the Securities and Exchange Commission (SEC) by Empire State Building Associates LLC, which is the legal entity through which ownership of the Empire State Building is syndicated to a group of individual investors, that as managers and trustees they will now continue with their original plan to proceed with a consolidation and IPO previously approved by its participants.

To figure out what the heck that all means let’s back up a bit.

Malkin Holdings, which is run by President Anthony Malkin and his father Peter Martin who is Chairman, is the New York property company that manages the Empire State Building on behalf of a fairly diverse group of individual investors. At the start of the summer the Malkins received what were reported to be two, and possibly even three, unsolicited offers to buy the Empire State Building outright.

Under corporate law, as fiduciaries the Malkins were, and are, obliged to consider such offers seriously and even to ultimately accept one if it should be clearly in the individual shareholders’ best interests.

However the Malkins themselves have doggedly been pursuing alternative plans for this hugely iconic building for quite some time and, as this newspaper has previously reported, they would clearly prefer to continue to proceed instead with their own alternative. A court has already sanctioned their plan to roll the building into a package with several other properties they control, the “consolidation” referred to in the very dry legal language above, and to then create a new publicly listed Real Estate Investment Trust (REIT) instead, which would also raise new money through an IPO and of course which they would continue to manage.

Since receiving these offers, or near-offers depending on their actual precise status and the details of which remain private, as both the potential offerors and the Malkins have both been silent about them, as one might expect the Malkins have since been dutifully undertaking a fiduciary investigation of their merits.

For the purposes of organizing the proposed new REIT the Empire State Building had already been appraised at a valuation of around US$2.5 billion, and it is unclear whether any of the purported offers actually exceeded this value. If they did not, this would automatically make the Malkins’ legal and due diligence task easier in rejecting them as they have now done.

We know this as on Friday they have filed an 8-K Current Report with the SEC and included with it a copy of the letter they have now sent out to all the participants in the building syndicate. This is what it says in terse, beautifully controlled, language which for that reason alone is worth showing to you in full:

As fiduciaries, we review all matters concerning investment groups we serve. In our review of these indications of interest, we engaged Lazard Frères & Co. LLC as an independent financial advisor. After our review, we have concluded that it is in your best interest to proceed with the consolidation and IPO as approved by a supermajority of the Participants.

Victory can be very sweet, and the understated language only serves to emphasizes it here. Lazard Frères are undoubtedly a heavyweight advisory firm, one whose services must have cost a lot of money to retain, but the result is now one which I imagine would be very hard to overturn in a court of law. So unless a better offer should now roll in, it looks very much as if the Malkins’ train is now leaving the station and going in the direction they would like.

This battle for control of the Empire State Building has been a long one, but the Malkins, père et fils, seem to have demonstrated admirable patience throughout in order to prevail; yet another hallmark of the successful, élite côterie of players in the New York property development and management business.