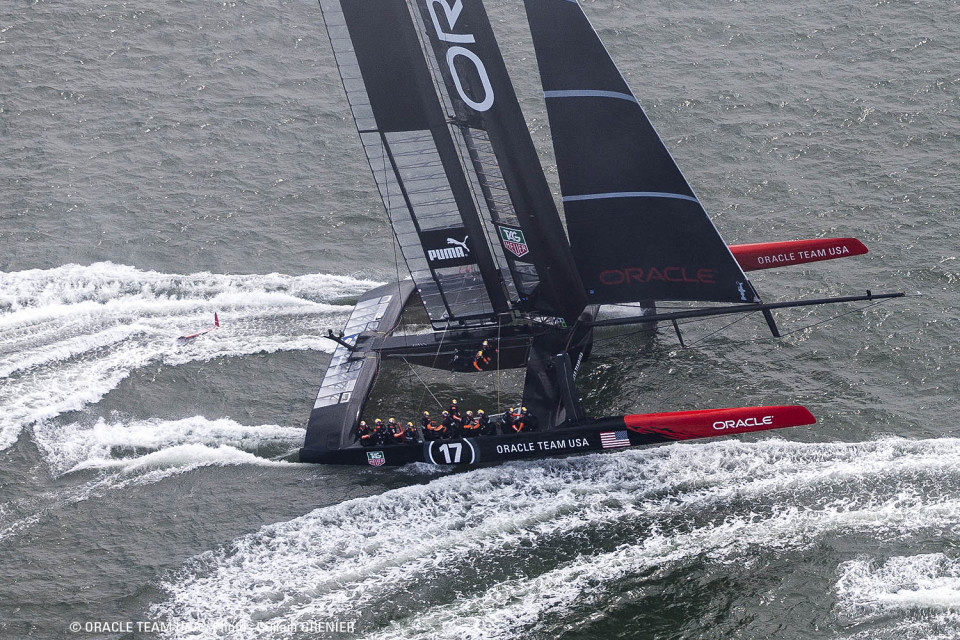 The America’s Cup Starts Today In San Francisco Bay.
The America’s Cup is an international yacht race that has been held at irregular intervals since 1851. The very first race was held around the Isle of Wight in England, and it was won by an American yacht called simply “America”, which then became the name of the trophy itself. 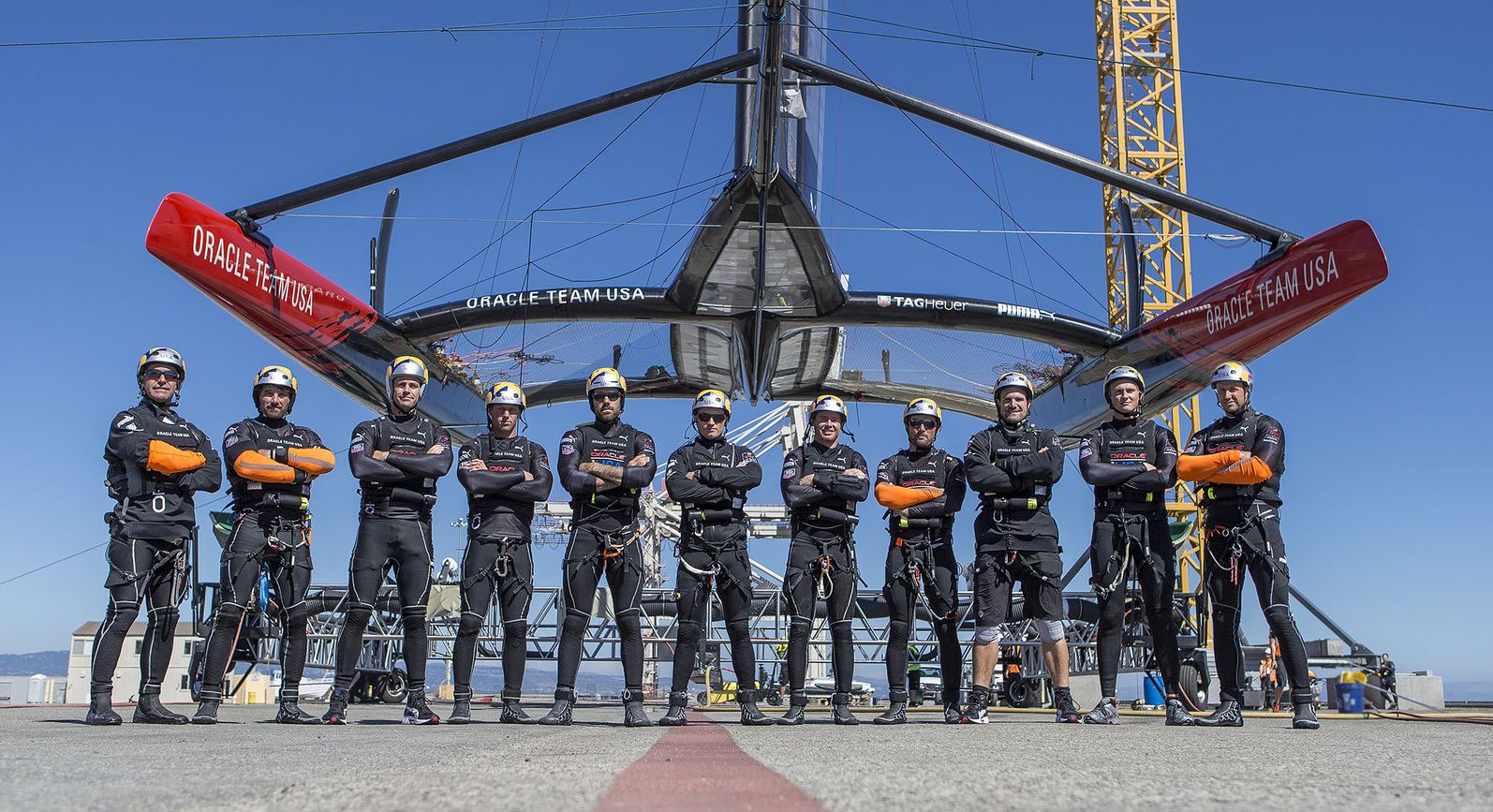 –
The America’s Cup today sits at the pinnacle of the international sport of yachting. As competing in it is a hugely expensive exercise, where each boat can cost millions, it is typically pursued only by very rich people, who sponsor the competing yachts, or by syndicates of such people or by corporations, or combinations of the above.

As one of the richest men in the world, with a net worth of around US$43 billion derived from his Oracle software empire, according to the Forbes billionaires list at March 2013, Larry Ellison certainly qualifies as someone who can make things happen, and he also happens to be a keen yachtsman.
– 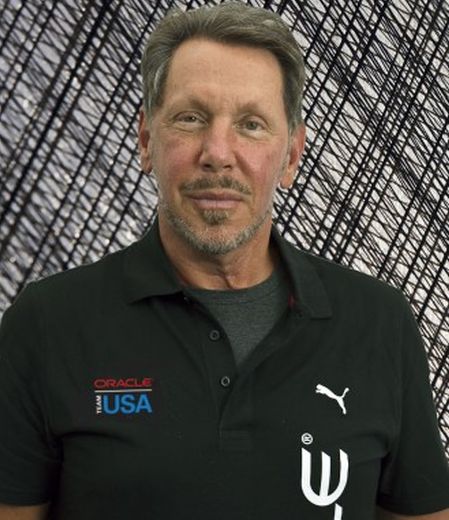 In 2010 Ellison’s entry “BMW Oracle Racing”, named after his software company and with co-sponsor car maker BMW, first won the America’s Cup when it took place in Valencia Spain, and where it also took place using technologically advanced multihulls for the first time.
Now, starting today there is a new America’s Cup challenge taking place in San Francisco Bay, with the contest being between the two finalists “Oracle Team USA”, as Ellison’s current entry is called, and “Emirates Team New Zealand” the successful challenger. Each team will likely be out of pocket about US$100 million by the time the bills are all in; this is certainly not small change. 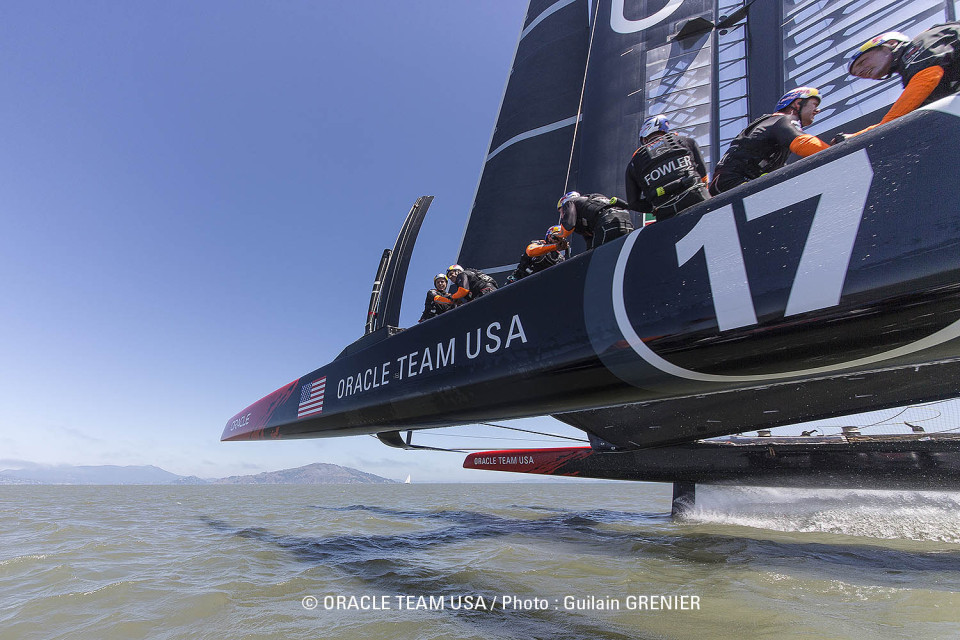 New Zealanders make both excellent sailors and sailboats, and they have won the America’s Cup themselves twice in the past so it should be a great contest. For this challenge the Kiwis have also teamed up, as lead sponsor, with the airline Emirates. The airline is a subsidiary of The Emirates Group, which is wholly owned by the Government of Dubai’s Investment Corporation of Dubai. 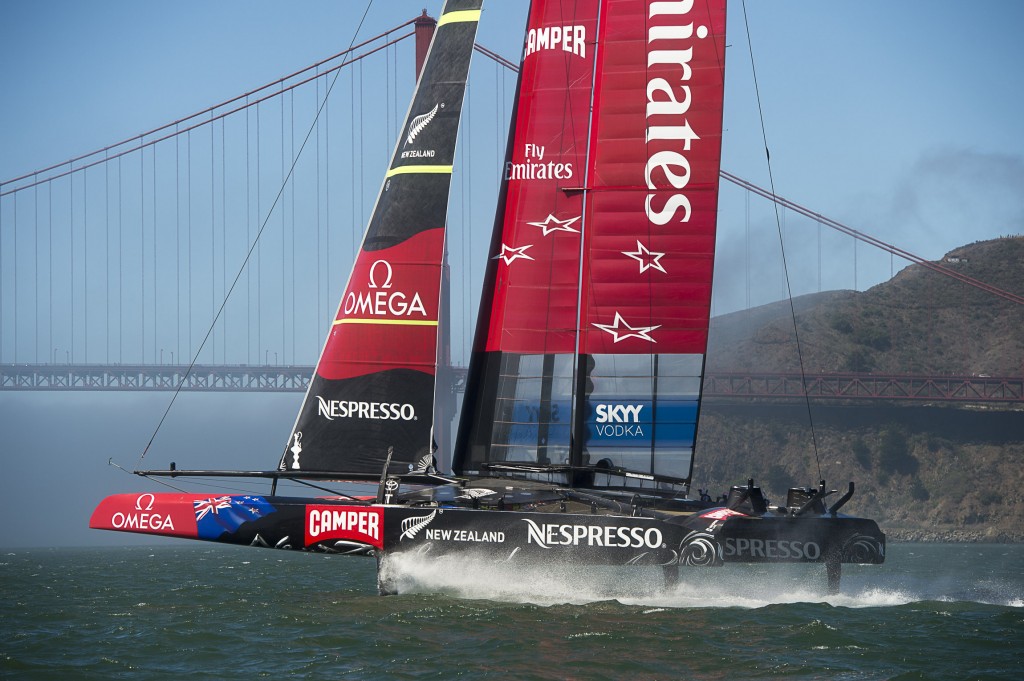 Even more interesting this time are the technology platforms being used for this year’s race. For over 150 years America’s Cup yachts had always been held using traditional monohulls, with technology being pushed to the limit in recent times only in some of their sail making techniques, and in the underwater appendages used to make their keels more efficient.

In 2010 when BMW Oracle Racing won, the yachts switched for the first time from traditional monohulls to much faster multihulls, much to the disgust of most of the traditional sailing fraternity at the time. The Oracle entry was a ninety foot trimaran, which had three pencil shaped hulls not just one, with a lot of air in between them, and much like, in some ways, the original wooden Polynesian outriggers they fundamentally derive from.

Even more humiliating for the die-hard yachtsmen sitting at the bar, in blazers and whites, in yacht clubs around the country the Oracle trimaran even had a “hard” wing main sail, in principle made exactly like an aircraft wing.

The losing yacht Alinghi, owned by Italian born Swiss billionaire Ernesto Bertorelli, was also a multihull, this time a ninety foot catamaran with “only” two, not three, hulls and it still had a set of traditional “regular” soft sails.
This time around there is an even more intense technology war going down in San Francisco Bay, which is just what silicon valley avatar Ellison wanted in the first place for this challenge.
First, the yachts are massive catamarans seventy-two feet long – i.e. they “only” have twin hulls. Second, they both have, aircraft like, “hard” wing main sails. 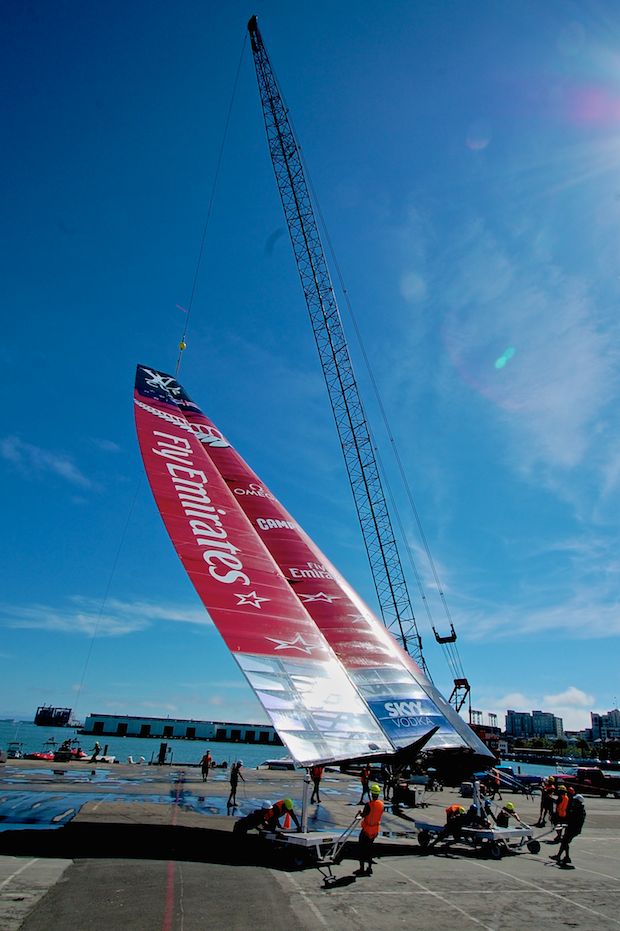 The photograph above was taken just the other day by a visitor to Emirates Team New Zealand, Todd Rickard. Todd is Program Manager for FPB Yachts, an innovative series of Steve Dashew designed ocean going luxury power yacht designs that, unlike most power vessels, are designed to recover completely from capsize in heavy seas if it should ever be necessary. You can find the FPB series at www.setsail.com

Finally, late in the design game both competitors’ designs morphed into absolutely the latest thing, becoming foiling catamarans that sail as much of the time as they can completely out of the water, on stilts called “hydrofoils”. 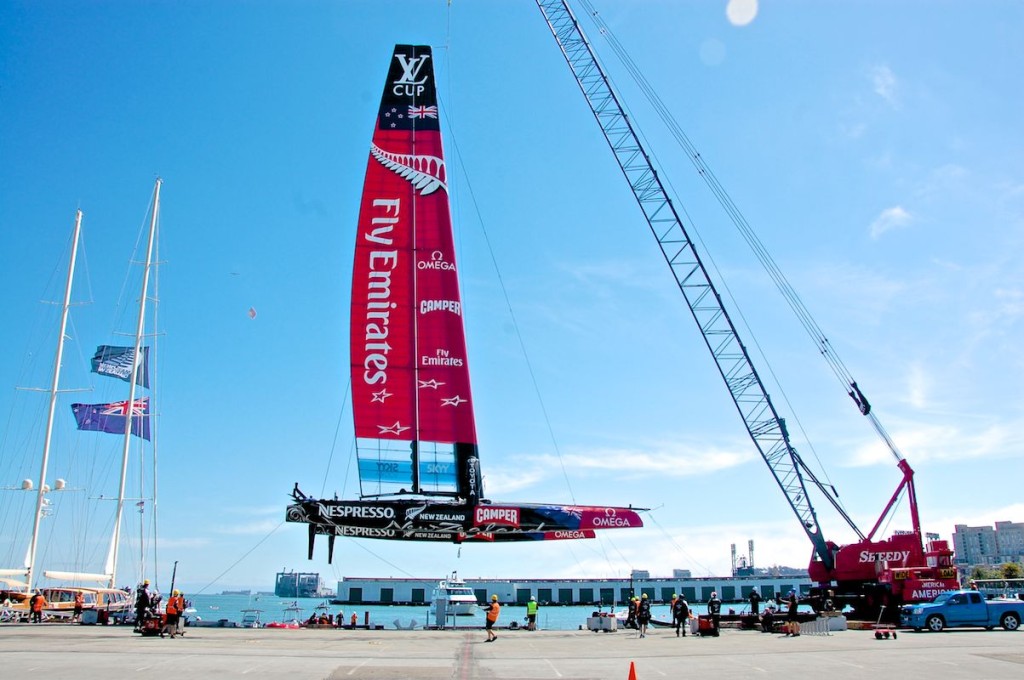 By raising the entire hull out of the water the drag induced by huge wetted areas simply disappears, and these yachts are now anticipated to race at up to eighty, yes 80, kilometres an hour on some parts of the course, even in comparatively light winds. The longer you can stay up on the foils out of the water, therefore, even in breaking seas and sometimes difficult wind conditions, the greater your advantage can be. This then becomes a completely new skill for skipper and crew to master.

For the first time too in an America’s Cup race, the course will follow along the windy coast line of San Francisco Bay itself, allowing what the organizers hope will be a splendid television experience – something that in the past has rarely been possible with boats disappearing off into the horizon for much of the race, far from both spectators watching the race and television cameras alike.

Because the typical super-yachtsman who sponsors such yachts is of necessity mega-rich, and occasionally let it also be admitted driven by large egos, the America’s Cup event in the past has sometimes spent almost as much time in courtrooms as on the water, at obscenely vast legal expense, with the happy winners being challenged by disgruntled losers seeking alternative paths to victory though litigation. 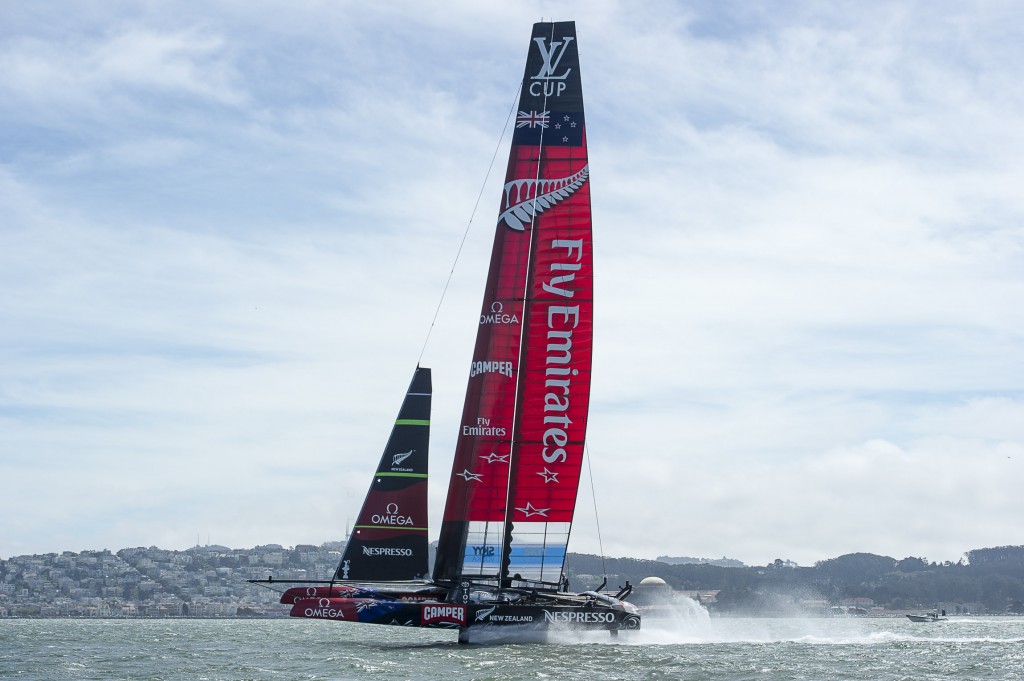 –
This time around there is already a new wrinkle even before going into today’s first race, with Larry Ellison’s Oracle Team USA being penalized two races for cheating in a precursor warm up event that was held in 2012.

That event was sailed in what were smaller, and officially one-design, forty-five foot catamarans; with the same design intended for everyone in order to test skill and not technological resources at that stage of the challenge.

This then led up to this year’s final challenge series that was held in July, the “Louis Vuitton Cup”, which sailed finally with the big seventy-two foot catamarans, with everything there then leading now to today’s final proceedings – which will continue for a maximum of seventeen races between the two competitors.

Apparently during last year’s warm up event, some of Oracle’s low-level team members surreptitiously placed extra, and completely illegal, lead weights in the front of their own catamaran to keep the nose down and add speed. This was completely against the rules, though was not even known then to their own leaders. It subsequently ultimately became a huge scandal once it was eventually discovered. 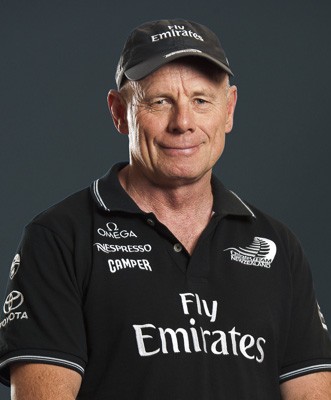 The ruling of an international jury that investigated this affair now provides for the Oracle entry to be penalized by a full two races in the seventeen-race event. When the ruling came down it included a direct comment from Mr. Nick Nicholson, Chairman of the Measurement Committee for the race, who was asked how he felt when he learned of the illegal weights put into the boats to make them faster.
“I felt old, used and stupid … our trust in the team had been betrayed, ” Nicholson is quoted as saying. “If we can’t deal in an atmosphere of a certain amount of trust, we simply cannot do our job.” (this snippet comes courtesy of sailing web site, “Sailing Anarchy”).
Clearly Mr. Nicholson remains an old fashioned gentleman in what is still supposed to be a gentleman’s sport.
As if that wasn’t enough, in addition, during practicing in May of this year to prepare for the races of the Louis Vuitton Cup which were then subsequently held in July, now already using the full size seventy-two foot catamarans one of the practicing multihulls crashed and tipped over, in only a moderate breeze, killing one of its’ crew members who got trapped in the frame under water. This obviously has devastated all concerned. 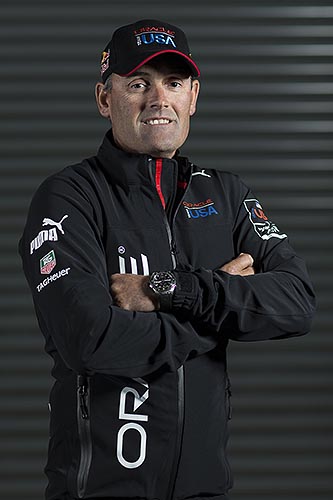 Now he will just have to do an even better job on the race-course. However, if Oracle should lose now by a margin of just one race he can always see if he can do better in court than on the water, and convert the deficit to victory that way…

However all this is now in the past, the America’s Cup race series is ready to start and may the best catamaran win! Because of the penalty imposed on it Oracle now needs to win eleven out of seventeen races to prevail. Emirates Team New Zealand only needs to win nine.

The official America’s Cup 2013 is online at: http://www.americascup.com/en/sanfrancisco

The official Oracle Team USA web site can also be found at: http://oracle-team-usa.americascup.com