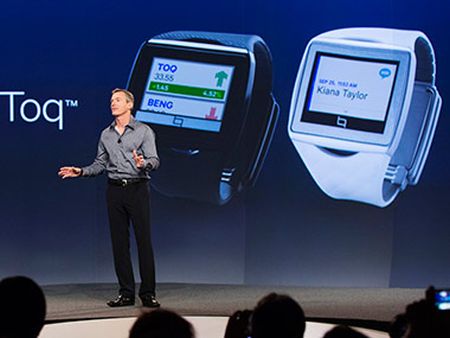 The Toq by Qualcomm

On Wednesday giant mobile chip designer Qualcomm announced a new smart watch device called the Toq, at a technology conference in San Diego. The device has a low power e-reader style of screen, one that remains quite visible in bright light, and connects wirelessly to a smart phone using Bluetooth.
Qualcomm CEO Dr. Paul E. Jacobs revealed the Toq during his keynote speech at the Uplinq 2013 wireless ecosystem conference.  ”I’m proud to show you for the first time, the Qualcomm Toq” he announced to a packed room at the Hilton San Diego Bayfront Hotel.

The Toq is basically a technology experiment for Qualcomm who, while they will undoubtedly expect to sell some, are likely seeking primarily to influence some of their mobile manufacturing partners with some of its design directions.
It is however great PR for a firm that once even used to make its own mobile phones, only to exit the business 15 years ago, in favour of chip-design and the mobile phone technology patent business. Even the name is fun, with the pun on “tick-tock” eventually penetrating the brains of even the slowest of jaded tech market watchers, including this one.
The smart watch idea actually first got started sixty seven years ago with Dick Tracy, a comic strip starring Detective Dick Tracy, a hard-hitting, fast-shooting and intelligent police officer. 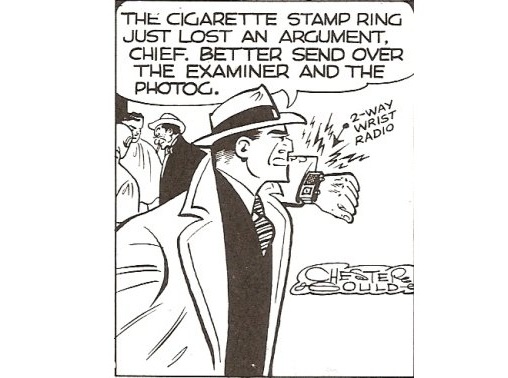 Dick Tracy Gets On The 2-way Radio/ Wikipedia

Its creator was Chester Gould and the new comic strip first appeared on October 4, 1931 when it was published in the Detroit Mirror, and was subsequently syndicated nationally. Gould then continued to write and draw the character for 46 more years until 1977, when he hung up his pencil.

The wrist phone, which was actually a radio as indeed actually are today’s mobile phones too, was introduced to the cartoon strip in 1946 after Gould went to visit an inventor named Al Gross who was an early pioneer in two way radio communications. It was even upgraded to a 2-way TV in 1964 staying way ahead of the technology curve but not outrageously so.

Ever since, techies and others have dreamed of bringing something like it to market, and in today’s technology terms as a phone, video device and computer combined. Hollywood even made a number of Dick Tracy films, including the most recent in 1990 starring Warren Beatty who also produced and directed it. The critics hated it but audiences loved it and it won several academy awards. 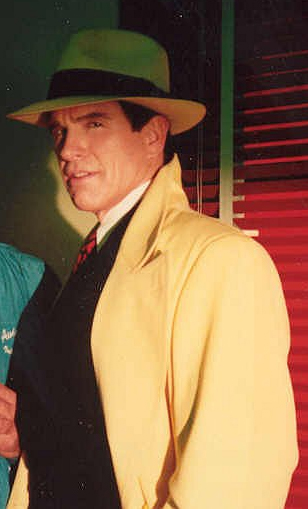 The first proximate version of something like Dick Tracy’s device came from Apple actually, and probably by accident, when in 2010 their latest miniature version of the iPod, the iPod Nano, was given software that allowed it to sprout a number of different watch faces.

By combining the Nano with many different kinds of wrist straps provided by a very willing accessories industry, a number of super cool customers started wearing them as fashion statements. 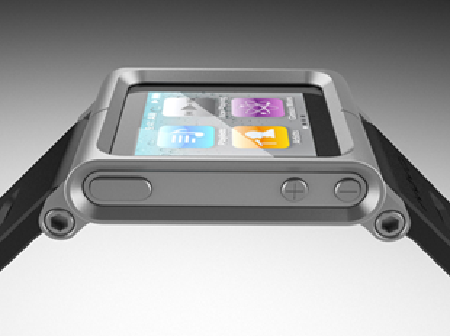 Of course it was of very limited capacity in terms of the technical functions it could perform at the time, other the software driven ability to show a multitude of different faces, but then that was probably part of the appeal.

Changing the face of your Rolex certainly costs a lot more, and even for a Timex it was not a trivial thing to do, which had even led to the watch industry to begin marketing fashion watches with a box of alternative faces that could be assembled by the customers themselves allowing for greater individual expression.

–
In the interim, wearable devices that track your body’s biometrics during exercise have since started also to become popular, promoted by Nike with its active bracelet called the “Fuel Band”, and others and interest in “wearables” as they are affectionately collectively known has continued to intrigue people in the tech world.

Then last year a small start-up called Pebble raised several million dollars through crowd sourced funding site Kick Starter for its version of what it thought a smart watch should be, and this is now coming to market.
Pebble smart watch

Just this week too, Samsung, not to be outdone by anybody these days, introduced its own smart watch to the world which it calls the Galaxy Gear, which also works by Bluetooth link to another Samsung device. Like all these devices launched to date, however, the Gear looks a compromised device in terms both of its aesthetics, which are quite bulky to give it some battery space, and its reported performance which is said to extremely sluggish. 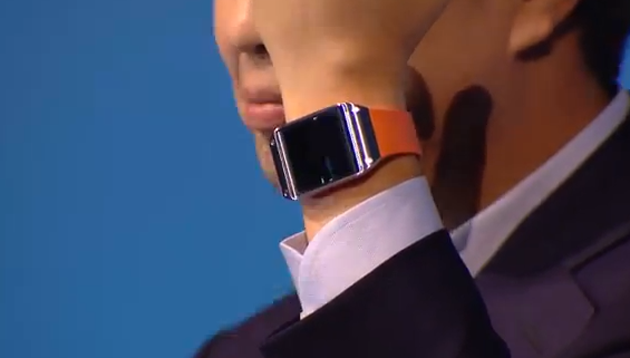 Finally conventional watchmaker Casio, who really do make some watches that are very smart, though not quite yet fitting the new description of watch/phone/video computer that is being ascribed to the category, are saying they are watching carefully and will do something themselves at some point to enter the race.

However, the elephant in the room here is of course Apple itself, which has publicly stated its interest in wearables and which has been trade-marking the name “iWatch” around the world in the last few months.

In addition, a number of intriguing, high profile, key hires have been made by Apple recently, including Jay Blahnik himself, the fitness adviser for Nike’s own Fuel Band fitness bracelet, and a very senior guy indeed, Paul Deneve who formerly ran the fashion house Yves St. Laurent itself.

While neither are expected to personally spend their time designing watch-bands, both will likely contribute in unique ways to the idea of wearables as luxury products also intended to be beautiful, rather than something solely utilitarian and functional.

This is the essence indeed of Apple’s own design approach today everywhere, in terms of providing devices that both function excellently and make design statements that continue to differentiate them as a brand and justify their premium pricing in the tough tech markets of today.
So nobody knows yet quite where Apple is actually headed, until such time as they choose to tell us, and until then one can only speculate, as well as to hope, they do indeed give us pleasant surprises when they launch such wearables products, now expected in the coming months.

There are a couple of hints out there, though, from which using first principles one could make some educated guesses. The first comes from glass maker Corning, suppliers of the tough Gorilla glass used in today’s iPhones. Corning has announced a future product called “Willow Glass” that can also be bendable: 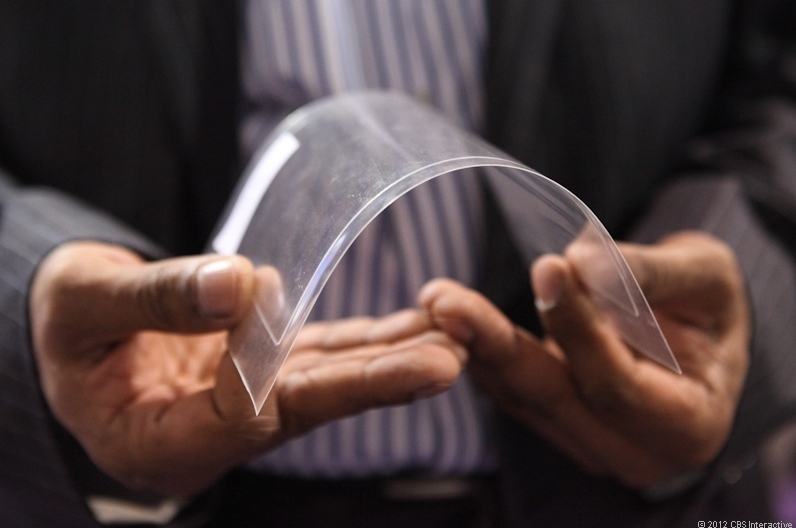 –
Whether this would be durable enough to be worn on a wrist remains to be seen, but it is certainly something intriguing enough to consider in terms of the form factors it can potentially offer.
A second clue may come from some of Apple’s own recent patent applications, which includes one item for circular forms of flexibly linked battery modules, courtesy of web blog “Patently Apple”, which reports on many of Apple’s patent filings once they become public knowledge: 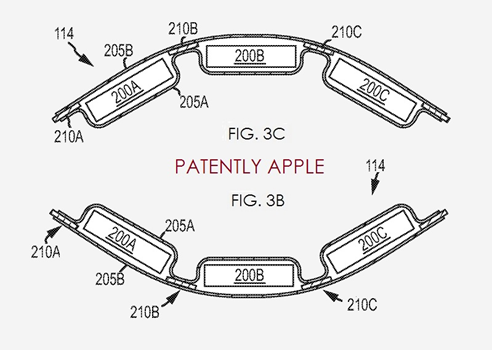 –
If you think these look very much like the flexible metal links of a Rolex watch you are not alone; that is exactly what they do look like.
So if we use our imagination for a moment, one could see an Apple branded iWatch as being a bracelet device with a curved screen of regular size put together with a Rolex-style bracelet for an interesting looking device, one that also goes several steps further in its functionality, and with its battery life, than what is out there today. We might also go further still ourselves and imagine for a moment such a product as having a very large curved screen taking up as much as a half-annulus itself, i.e. half of a circle, lying on top of those flexible battery components. That would be a very big bangle indeed, but why not? 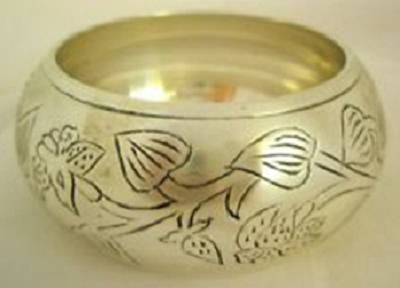 Large bangle – is half of this the next Apple smart watch?

Well, we will know soon enough once these things finally come to fruition. Qualcomm will surely be there with their chips inside the device when they do and Apple will, or will, not have another huge hit on their hands depending on how far, and also how successfully, they can take us with their own “imagineering”.

Chester Gould, who died in 1985 at the age of 84, and who started it all with Dick Tracy would certainly be proud, and it is not at all unrealistic to assert that his character presented inspiration for some of these products that are only today starting to emerge.