With Icahn reportedly having pushed the value of his share holdings in Apple well over the one billion dollar mark, and his share of Nuance to over 16 percent, Icahn has now seen to be setting the scene for a buyout. 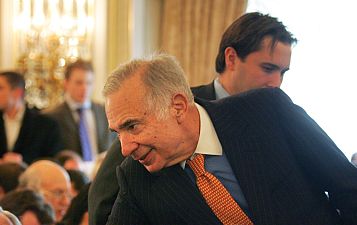 That most experienced and most aggressive of all corporate raiders, Carl Icahn, who in the last few months has been taking strong positions both with Apple as well as Nuance Communications, undoubted market leaders in speech recognition software has now been recognized by many industry commentators as attempting to take a different approach to both the company’s activities.

Instead of following his normal modus operandi of insisting that the company has taken a particular shareholding is being efficiently managed and consequently undervalued, in this particular instance, it now appears that Icahn would ideally like to see Apple acquire Nuance.

Looking at the bigger picture there would be a lot of logic in Tim Cook at Apple authorizing a takeover bid for the company. After all Apple are strong believers in voice recognition technology and even use some of Nuance’s expertise in the development of Siri, a voice activated intelligent personal assistant and knowledge navigator which works as an application for Apple Inc.’s IOS operating system.

With Nuance come up for grabs at around $7 billion, Tim Cook could almost pay for the acquisition out of petty cash being that the company is currently sitting on around $150 billion in cash.

While Icahn’s tactics have always been notoriously difficult to read, and it is possible that he may not be following his normal path too long and short term profits, it appears that this time around, he may be taking a slightly different approach. One thing is for sure that time will soon tell.

Carl Icahn was born and raised in the suburb of Far Rockaway, Queens, New York City. Icahn graduated from Princeton University with a Bachelor of Arts degree in philosophy in 1957, later going on to study medicine at the New York University School of Medicine. However after two years Icahn obviously decided that a career in medicine was not for him, and he abandoned his studies to join the army.

After being released from military service Icahn began pursuing his career on Wall Street, spending the years 1961 to 1968 learning the ins and outs of being a stockbroker. In 1968, Carl Icahn decided the time was right to paddle his own canoe, and he formed Icahn & Co., a securities firm focusing on risk arbitrage and options trading.

By 1978, Icahn & Co. had begun to establish themselves with a reputation for developing controlling positions in individual companies, implementing a management shakeup, and then selling their shares off, usually at a considerable profit.

During this time became recognized as the first “corporate raider “ at one time or another having held substantial or even controlling positions in a number of leading American corporations including RJR Nabisco, Texaco, Western Union, Gulf & Western, Viacom, Uniroyal, Motorola and most recently Herbalife and Dell Computers.

One of the most high profile cases involving Icahn was his hostile takeover of Trans World Airlines (TWA) in 1985. After successfully gaining controlling interest in the airline, Icahn began to systematically sell off TWA’s assets in order to repay the debt he used to purchase the company, coining the term “asset stripping”. By 1988, Icahn had taken TWA private, earning his company a profit of close to $500 million whilst leaving TWA with accumulated debts of more than $540 million. In 1991, Icahn brought in an additional $445 million through selling TWA’s prized cross- Atlantic routes to American Airlines.

No more than 20 years later, Carl Icahn is now well into his seventies, yet has lost none of his appetite for shaking up companies. Maybe this time around he has discovered a new twist to his plot.