Dorf, best described as an entrepreneur with a different approach to the world of business, who  established his City Winery International in 2008 in Manhattan, (and he moves on) 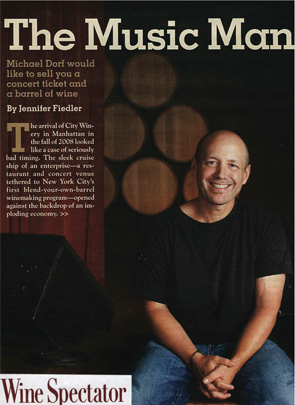 Michael Dorf has been a very well known figure on the New York entertainment scene, since the nineteen seventies, when he opened his first night club, the Knitting Factory, in the East Village in Manhattan, when he was still in his early twenties.

Thirty years after he founded his mythical Knitting Factory, Michael Dorf came up with what he felt was another winning concept, the City Winery. The thinking certainly was original, based around, as the name suggests, opening a winery in the center of Manhattan, within walking distance of Wall Street on Hudson Square.

While that idea was revolutionary in its own right, the twist in the tale was that Dorf planned to produce wine in oak barrels which he would sell to the financial whizz kids on Wall Street, either for their own personal use or for resale to visitors the 20, 000 square feet City Winery, by the bottle or the glass. Those looking for a long term investment, or simply enjoy the exclusivity of having their own personal wine label would find both of these possibilities available at the City Winery.

While Michael Dorf’s concept was generally regarded as sound, and the City Winery was both well situated and beautifully laid out, he was soon to discover that there was only one flaw in his planning, yet one that he would have been unlikely to have foreseen- the timing. 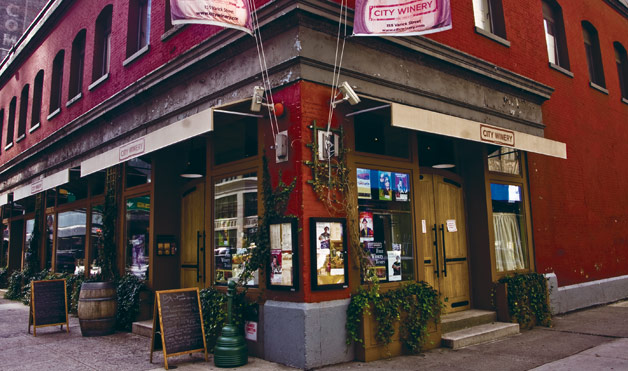 Dorf recalls have no option but to move into survival mode, scrapping his business plan was to sell barrels of wine to bankers, instead producing wine in limited quantities to be sold by the bottle or even by the glass, while at the same time utilizing the spacious premises he had leased for the winery to hold live music concerts, where according to New York folklore, copious quantities of wine was consumed by the 300 capacity crowd that would turn out.

Devised more by accident than design, Dorf’s concept for his City Winery has proved to be a success, and now five years later, he is now pioneering an expansion drive that will see a number of similar winery “satellites” opening in city centers across America and eventually other parts of the World where people enjoy listening to live music and enjoying a glass or two of good wine at the same time. His first satellite  is on the verge of  opening in Chicago and Dorf has  a number of venues in his sights to expand his now well established formula of combing a  winery, restaurant and  live performance theater.

Michael Dorf’s is well known for opening interesting businesses based around entertainment with a different twist. His Knitting Factory was set up to act as a music venue to promote fresh and often experimental jazz and rock music. The club was an outstanding success and went on to become among the most in demand place to be seen or be heard in the “Big Apple” for many years.

Taking advantage of being given access to “ insider” information on to the most up and coming acts on the US music scheme,  Dorf, ever the entrepreneur, established a spin-off entertainment company, KnitMedia, eventually operating eight record labels that released more than 700 recordings, 200 of which Dorf was involved directly in the production.

At the same time Dorf was involved in the promotion and production of a number of New York’s largest festivals taking in the Intel and Apple and the New York Music meets Technology Festivals New York Jazz Festival. As well as producing concerts in the  a tribute series at Carnegie Hall as tributes to the career of some of the Twentieth Century’s most iconic songwriters such as Bob Dylan, Neil Sedaka and Elton John among many others.

Dorf’s talent as a producer of music events were also widely utilized in Europe where he was involved in the production of more than 100 events including the Montreux Jazz Festival, the North Sea Jazz Festival, and the Vienna Jazz Festival.

Since opening the City Winery, Michael Dorf has stood firm on his commitment to donate no less than about 10% of his annual wine production to raise money to help a number of New York City public schools, as well as the Dana & Christopher Reeve Foundation, American Jewish World Services, ELEM – Youth in Distress in Israel, the

Jewish Funds for Justice and the American Jewish Committee and a number of other similar causes.

Additionally, Michael was involved in the founding and is still involved today in two Jewish focused organizations. The first, Tribeca Hebrew, is an after-school Hebrew program based in Lower Manhattan and the other, the Downtown Arts Development, produces the annual New York Jewish Music & Heritage Festival, which also includes organizing the annual Schmooze conference and promoting the activities of the International Jewish Presenters Association (IJPA).

To say that Michael Dorf keeps himself busy would be an understatement. However you would have to agree that all the activities that he does involve himself with, are all for a good cause as well as a good sound and even better taste.

In this article:Finance, East Village