Israeli Tech company Gauzy has just announced it has raised US$4 million of new equity investment from an English venture company. Earlier, in 2009 when it got started it raised US$350, 000 of seed investment from Israeli entrepreneur Eli Dahan.

The company is developing a new type of smart glass, whereby a glass maker combines a Gauzy specified laminated liquid crystal surface layer onto conventional glass sheet, and then the translucence of the glass can be modified by using a special, patent-pending, capacitative dimmer switch. The result is to offer privacy on demand in windows, bathrooms, vehicles or wherever you might wish to put it. On the company’s website it has even been placed as an example on the front of a refrigerator so that you can see what is inside without opening the door by pressing a switch.

The company’s goal with the technology is to enable the economic production of glass with a range of such readily electronically controlled qualities, including dimming glass with numerous stages of transparency, the creation of in-glass blinds, and even the installation of transparent solar cells into window glass.

According to the company it already has in place a manufacturing processor for their smart glass in Romania, one in Australia and two in Brazil, all of whom are capable of an trained in processing their laminates.

Forms of electrochromic glass, as it is called, have been around for more than twenty years, whereby the transmission of light is controlled by some form of electric conductance. The idea has not yet taken off in mass volumes though, doubtless because so far the controls aren’t yet perfect and it probably still costs too much. A company called Sage, owned by French glassmaking giant Saint Gobain, holds a number of patents in this field and they have been offering their version of the product for some time.

Corning Glass of the US today is also now very interested in the field, as it aggressively seeks new growth paths to follow for its core glass businesses, and in June 2013 it and other investors announced a new US$62 million investment in California based glass technology company View Inc, who also hold patents in the field and who already manufacture their own current version of the product, in a factory in Mississippi, which they call “dynamic glass”. A senior officer of Corning is now also joining the View board of directors.

True to form, both Corning and Sage are currently suing each other over their mutual intellectual property rights in this area of technology.

So into this arena marches little giant-slayer Gauzy, which was founded just five years ago by CEO Eyal Paso and CTO Adrian Lofer. Both their names are on a Gauzy US patent application that was first filed in September 2009, and published by the US Patent Office finally only on July 25th 2013. It will be quite some time too before the patent office there makes any final determination on the merits of their invention culminating in the granting of a patent. Their patent application focuses almost entirely on Gauzy’s claimed proprietary development of a means of providing an effective, low voltage, dimmer control mechanism – so for Gauzy it is clearly less about the glass and more about the electronics…

As background, in the Israeli Technology magazine NoCamels Eyal Peso describes how he once came across what he described as a “very nice gimmick” in a New York clothing store, where there were automated dressing rooms, with transparent glass that turns opaque when the customer enters the dressing room. 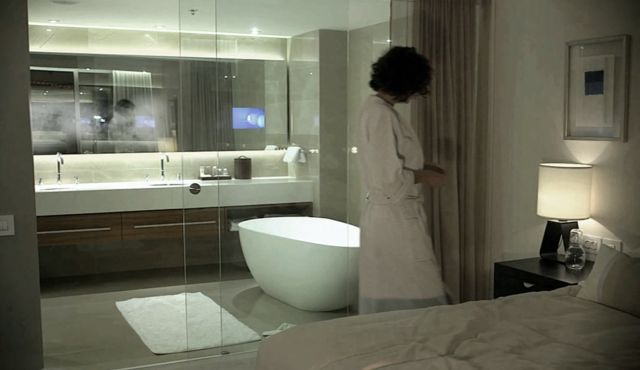 For Peso the potential seemed limitless in such products, but he reached the conclusion that all the existing products on the market “operated incorrectly from an electronic standpoint” – in his words.

So he and his co-founder Adrian Lofer set up a small-scale lab to learn about liquid crystal materials, and started to develop liquid crystal sheets or films, all quite similar materials to what goes into computer or television screen displays. The transmission of light through liquid crystal can be altered in response to certain magnetic fields, and Gauzy’s patent application is for the controllers, which are designed to be capable of controlling large films but with low power consumption. And, just as important, they also allow the user to determine the amount of light passing through in a dim-able manner.

Already, in March 2012 Gauzy has installed its technology at the new Ritz-Carlton hotel in Herzliya, Israel. The glass bathroom walls in the suites there are controllable to enable either privacy or transparency, which impacts positively on the livability of the suites. The company also has small installations of its product in Jerusalem and in Shilo.

Peso is right to think that space can become “dynamic” in this way, as he puts it, though he probably shouldn’t use quite that term as it happens to be the product name for Sage’s offering. However it is clear he is far from the only game in town- with two very big players slugging it out right in front of him. Let’s hope they don’t sue him too, and it may be they might just buy his controllers instead some day.

In this article:Israel, technology, US, television, Finance, Herzliya, Glass