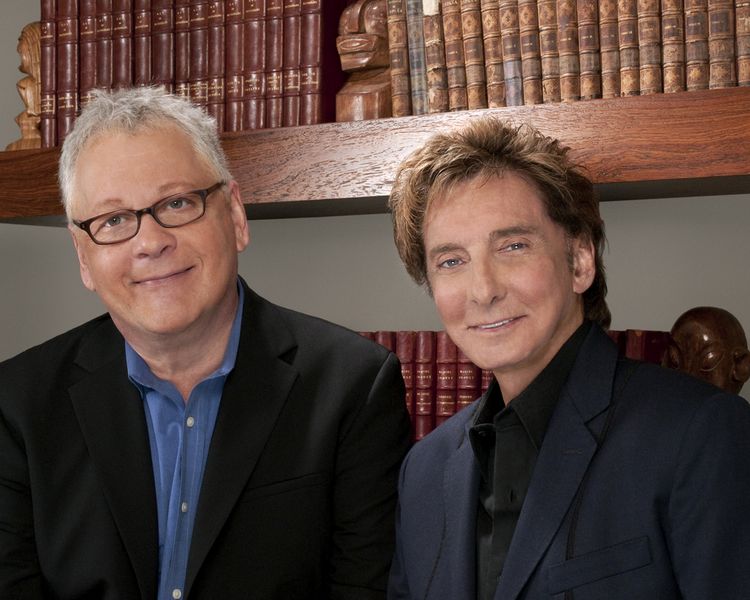 (L-R) Bruce Sussman and Barry Manilow back to family roots

Manilow has teamed up with Broadway lyricist Bruce Sussman on a musical project that has been based on a documentary by famous German director Eberhard Fechner. The documentary tells the story of a long forgotten close harmony group of singers known as the “Comedian Harmonists” who were popular in prewar Germany before being disbanded by the Nazis.

Barry Manilow , best known for his popular but lightweight recording career which peaked in the seventies with some major international hits like Copacabana (At the Copa)”.”Mandy” and, “Can’t Smile without You”, has taken a step back into history.  Manilow will be working in  cooperation with Sussman ,   relating the story of the six-man German vocal group, the “Comedian Harmonists”. The “Comedian Harmonists” of whom three members were Jewish, eventually broke up during the early nineteen thirties, as a result of unrelenting pressure from Nazi activists.  During their seven-year career, the group succeeding in building a tremendous following thanks to their close harmony musical capabilities interlaced with humor. Eventually their reputation spread across all of mainland Europe, and even saw them making a number of successful tools to  the United States, as well as appearing in no less than 21 films.

Now Manilow and Sussman will be releasing a musical in their memory under the title of “Harmony — A New Musical”. Their production will be making its first curtain call in Atlanta, Georgia  at the Alliance Theatre in the beginning of September 6, after being in the works for more than a decade

According to Manilow and Sussman, “Harmony — A New Musical” has been crafted to suit a 2013 audience, although the music has been totally inspired by the unique close harmonies of the Comedian Harmonists.

Manilow also hastened to point out that the storyline of Harmony “isn’t about the Holocaust, ” whilst it does contain strong references to “the approaching storm” felt by Jewish people in mainland Europe during the mid nineteen thirties.

Harmony will be directed by Tony Speciale, known for his direction of a number of successful off-Broadway productions. The musical will feature a number of original numbers as well as some specially co-written for the production by Speciale and Manilow.

The pair has enjoyed a number of successful writing collaborations in the past, with undoubtedly their best known being “Copacabana”, the song for which Manilow is most widely associated.

The cast members for Harmony have been hand-picked by Speciale to suit their ages the group was initially formed in the late 1920s. Cast members include such well-known stage stars as Will Blum, Chris Dwan, Shayne Kennon, Will Taylor Douglas Williams, Tony Yazbeck, Leigh Ann Larkin and Hannah Corneau.

As far as the members of the original Comedian Harmonists, Ari Leschnikoff, Erwin Bootz, Harry Frommermann, Erich A. Collin, Roman Cycowski and Robert Biberti were concerned, they never performed again together after disbanding, although all of them succeeded in surviving the war.

Barry Manilow was born Barry Alan Pincus in the Williamsburg suburb of Brooklyn, New York. After his bar mitzvah, Barry adopted the surname Manilow (his mother’s maiden name.) After completing High School, Barry enrolled in the Juilliard performing arts school, while working at CBS to pay his expenses.

In 1967, at the age of just twenty-five, Manilow was appointed the musical director for the WCBS-TV series Callback, later going on to join Ed Sullivan’s production company, as musical conductor and arranger, during which time he was successfully building a career as a writer of catchy jingles for both radio and television, a lucrative sideline which continued well into the nineteen seventies, even as Barry’s mainstream recording career was beginning to take off.

In 1976, Manilow won two Clio Awards, the international advertising world’s version of the Grammy, for his work for on the Tab and Band-Aid marketing campaigns.  For many years after he became an internationally successful recording artist, Manilow would play a selection of his favorite jingles during his live concerts.

During the mid seventies, Barry Manilow’s career as a recording artist really began to take off, possibly peaking in 1978, with no less than five of his albums appearing in the best-seller charts simultaneously, a feat equalled only by Frank Sinatra, Michael Jackson, Bruce Springsteen, Herb Alpert and Johnny Mathis. Between 1974 and 1983 Manilow ran up a total of three chart topping singles in the US, with a total of 25 that succeeded in making it into the 40. During his career to date, Barry Manilow has sold more than 80 million records worldwide and been awarded three consecutive American Music Awards for favorite pop/rock male artist, as well as producing and arranging albums for other artists, including Bette Midler and Dionne Warwick.

After his career as a recording artist began to wind down, Manilow reverted to becoming a live performer, particularly in Las Vegas, where he featured as the headline act at the Las Vegas Hilton Hotel for close to five years, performing hundreds of shows before moving to the Paris Hotel in Las Vegas in early 2010, where he still performs on a regular basis.