–
The general meeting ended without a vote. Participants laughed at the statement, “Each production well will finance the next.” 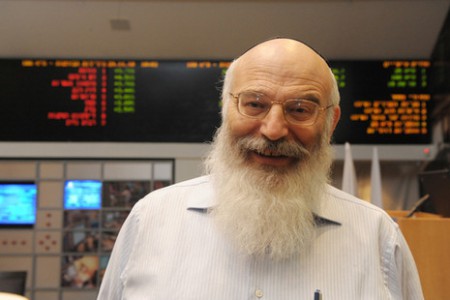 “I ask you to listen politely, and not to interrupt the remarks of Tovia Luskin, ” said Givot Olam Oil Exploration LP (TASE:GIVO.L) investor relations manager Meno Kahane at the opening of the participation unit holders meeting at Kfar Hamaccabiah last Wednesday. It seems that he was aware that his appeal to the company’s investors would not be met.

The meeting, scheduled for 5 pm, seemed to begin as a reunion. Veterans of previous meetings exchanged greetings and enjoyed the refreshments as they caught up on news since the last meeting. A queue developed at the registration desk, and it soon became apparent why: many investors brought to the meeting their attorneys, who confirmed that they also represented shareholders who were not coming.

Luskin initially tried to avoid friction with the investors, entering the stage from a back door. But the show he encountered was apparently not much to his liking: 600 investors, who came prepared with signs and slogans condemning him, and against the main resolution on the agenda: the immediate raising of $10-15 million in capital.

The general meeting opened with a video about Givot Olam’s recent activity prepared by the general partner. At the end, the announcer said in an authoritative voice, “The business model is clear: each production well will finance the next.” This sentence caused outright laughter in the audience, given the contradiction with the summons for the meeting.

Luskin then appeared on the stage, and tried to do what he knows best: excite the audience. “Givot Olam is a shining star in the skies of Israel’s energy world. We are the first and only company in the past 60 years to produce oil in Israel, ” he said, but then disclosed that current investors in the company were not the same people as in 2010.

“We’re investing enough money here. We’ve heard these stories a thousand times already, ” was just one of the responses.
After Luskin spoke for more than 45 minutes, the investors’ patience ran out. They began to swarm in front of the stage, pulled out a megaphone, and began making counter-speeches and shouting at Luskin. Any attempt to hold a vote under such conditions was doomed to failure, and at the meeting was adjourned at 9:15 pm without a vote.

“Was this expected?” “Globes” asked Luskin on his way out.
“We knew what we were getting into, but we thought it would be calmer, ” he replied.
On Thursday morning, after things calmed down, Givot Olam issued a laconic statement summarizing the meeting, which did not reflect what happened there. “The company hereby announces that, due to the conduct of a group of investors at yesterday’s general meeting, which did not allow the continuation of the meeting in a proper way, it was decided to cancel the general meeting without holding a vote on the proposals on the meeting’s agenda, ” it said.
Published by www.globes-online.com

In this article:Israel, Globes, Oil and Gas, drilling, Finance, www.globes-online.com