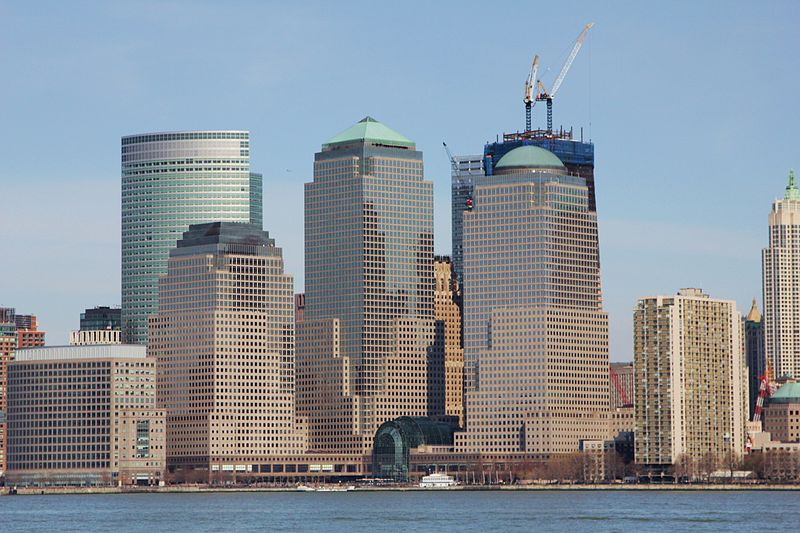 Brookfield Office Properties (Brookfield) is reported to be in advanced talks to purchase the NYMEX Building in New York, whose address is 1 North End Avenue. The property is an elegant 16-story office tower located in lower Manhattan, and directly adjacent to Brookfield’s own existing, rather beautiful César Pelli designed, 8 million square foot office complex, known today as Brookfield Place.

This building, which has an advanced trading floor, is presently partly occupied by the New York Mercantile Exchange (NYMEX), a commodities exchange. The building is owned by its parent company, CME Group (CME). CME is a Chicago based commodities and derivatives trading giant which acquired the NYMEX company in 2008. The purchase price for the building is said to be over US$190 million, according to Crain’s New York. With about 560, 000 square feet of space, that translates into a price of US$340 per square foot for a building first constructed in 1997.

The four-tower Brookfield Place complex itself which sits directly beside it had been built about a decade earlier by Olympia & York, also a Canadian company, and its original name at that time was World Financial Center – of course due to its proximity to the World Trade Center directly across the street, and to which it was connected by a walkway. 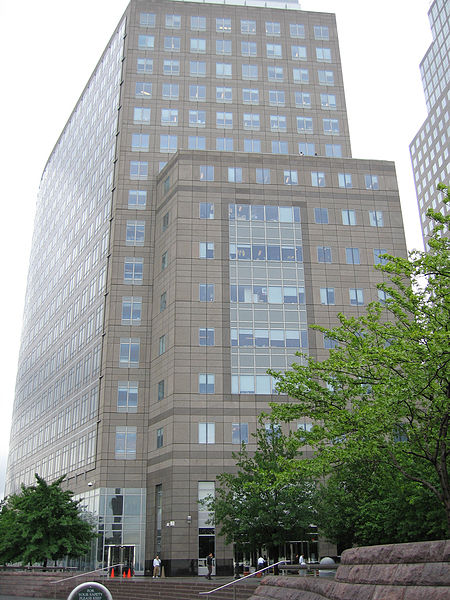 CME had put the building, which directly overlooks the Hudson River immediately west of Brookfield Place and the nearby Goldman Sachs Tower, up for offers at the end of May. They expect to continue operating a NYMEX trading floor in New York even if closing of a sale to Brookfield should take place, most likely by leasing back a portion of the building, including the trading floor.

At the time they put the building up for offers CME made a point of stating publicly then:

“CME remains committed to our floor based membership and open outcry trading services in New York, which continue to be a profitable part of our business and serve our customers well, ” said Jamie Parisi, CME chief financial officer. “The sale of the NYMEX building will help us continue to reinvest in our core derivatives business, just as we did following the sale and lease-back of office space in the Chicago Board of Trade building in Chicago last year. Going forward, whether we decide to retain occupancy at One North End or relocate within Lower Manhattan, we are committed to updating our New York offices to reflect the innovation and quality of our CME offices around the world.”

The architecture of the two developments closely match one another and local sources indicate that Brookfield, which is one of the largest landlords in the United States, wants to make the building the fifth tower in Brookfield Place in order to consolidate its marketing impact on this segment of lower Manhattan’s commercial office neighborhood. Given the softness and vacancy levels that persist currently in lower Manhattan’s office inventories, plus the additional space coming on stream as the new towers of the the World Trade Center finally, and serially, come to fruition in the next year or two this looks like a smart decision.

Brookfield Asset Management Inc. is a publicly listed Canadian asset management company that manages a global portfolio valued at over $180 billion, invested on behalf of clients. The firm’s assets are concentrated in property, renewable power generation, infrastructure and private equity. About half of the company’s assets are in property, and about ten percent each in power generation, infrastructure, public shareholdings and private equity.
Geographically, about 10% of its assets under management are in Canada, about half are invested in the United States, about 10% in Australia and Asia taken together, 10% in South America and the rest in Europe and the Middle East.