Professor Amnon Shashua’s company, OrCam, is in the final stages of developing a system that is capable of recognizing and later recalling an unlimited number of objects through a specially developed camera-based system integrated into what appear to be a normal pair of looking glasses . 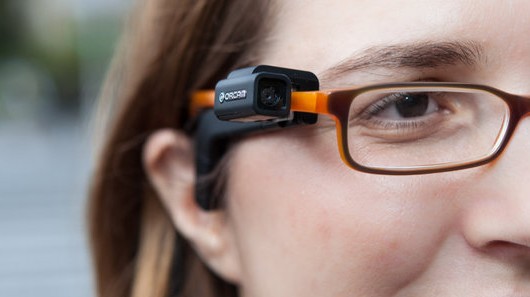 Amnon Shashua, a computer science professor at the Hebrew University in Jerusalem has been involved in developing his system to provide the visually impaired to considerably improve their abilities to see in conjunction with a fellow member of the faculty,  Shai Shalev-Shwartz, who developed the delicate computer vision algorithms that drive the billions of minute snippets of information gathered every second. This visual information is transported by an ultra thin and totally unobtrusive piece of cable to a miniature portable computer that sits snugly in the wearer’s pocket. The system then transfers the information through a bone-conduction speaker attached to the wearer’s glasses by a small but powerful magnet. The OrCam facility will then “read aloud” the words or even specific objects pointed by the wearer.

What the camera is capturing and recording is what is known as “text in the wild, ” ranging from text on an advertisement hoarding, numbers of local buses , the color of traffic lights developing to remembering familiar landmarks and the faces of friends and loved ones.

Existing reading aids for the visually impaired and the blind have tended to large, clumsy devices as well as being, at best, capable of recognizing text in restricted environments, with the most recent  Smartphone “applications” that, while offering  an improvement, still have limited capabilities to help the vision impaired.

In contrast, the OrCam technique, according to Professor Shashua and his team, provides what they regard as a reasonable trade-off between accuracy and speed. Do so using an in house developed technique, known as Share boost, which is capable of distinguishing the concept that as the number of objects requiring to be recognized grows in number and accuracy, the computer system is capable of increasing the amount of additional computer power required, while minimizing the power needed to retain and recall images previously added to the visual library. The OrCam device’s battery has been programmed to operate for up to six hours before requiring a re-charge

When someone wearing a pair of OrCam glasses, comes upon an object that they wish to retain for memory, all they are required to do is point in the direction of the object and it will be retained for memory, even in a variety of lighting conditions as well taking in flexible surfaces.

While OrCam have developed their system to be usable by the blind, the team feels it will be most effective for those who are classed as being visually impaired most people who suffer from limited vision that is incapable of being adequately corrected through reading normal glasses.

OrCam plan to initially market their device in the United States within the coming months. More than 20 million people in the United States over the age of 18 are known to suffer from some kind of visual impairment, while according to information gathered on behalf of OrCam, there are close to 350 million adults suffering from some form of significant visual impairment. The new device is expected to retail for around $2, 500.