The UPS Store will become the first US national retailer to offer 3D printing services to entrepreneurs, architects, start-ups and other retail customers. The UPS Store is installing Stratasys uPrint SE Plus 3D Printers in six test locations, beginning in San Diego.
– 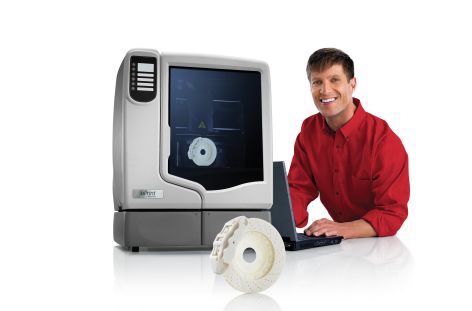 Stratasys Ltd. (NASDAQ: SSYS), a manufacturer of 3D printers and production systems, today announced that it has been selected by The UPS Store to provide its 3D printing systems to The UPS Store as part of a test program that will make it the first national retailer in the U.S. to offer 3D printing service to entrepreneurs, architects, start-ups and other retail customers. This service will enable UPS Store customers to have their 3D design 3D printed on-site, in six test locations, beginning in San Diego.

The test signals a collaborative effort by Stratasys and The UPS Store to make 3D printing accessible to small businesses as awareness of the technology and its capabilities grows. Stratasys 3D Printers can create on-demand, custom objects of virtually any complexity in a fast and simple process.

“3D printing technology is becoming increasingly accessible to a growing number of companies and consumers. Small businesses are beginning to realize how this revolutionary technology can help them to be more competitive, ” said Stratasys Executive Vice President, Jon Cobb. “The UPS Store and Stratasys share the vision of strengthening innovation and competitiveness by making 3D printing accessible to a growing number of users.”

While the program is aimed at small businesses, it is open to anyone interested in trying out on-site 3D printing services. “After doing a lot of research, we went with the Stratasys uPrint, because it has a small footprint and is easy to operate, ” said The UPS Store small business technology leader, Daniel Remba.

Following the launch of the test, retail customers will be able to bring a Computer Aided Design (CAD) file to participating UPS Store locations and have their 3D design printed on-site.

Stratasys Ltd. (Nasdaq: SSYS) is the corporate entity formed in 2012 by the merger of 3D printing companies Stratasys Inc. and Objet Ltd., based in Minneapolis, Minn.  Stratasys manufactures 3D printers and materials for prototyping and production.

Since June 2012, the company’s range of over 130 3D printing materials is the widest in the industry and includes more than 120 proprietary inkjet-based photopolymer materials and 10 proprietary FDM-based thermoplastic materials. Stratasys also manufactures Solidscape 3D Printers and operates the RedEye On Demand digital-manufacturing service.

The company has more than 1100 employees, holds more than 500 granted or pending additive manufacturing patents globally, and has received more than 20 awards for its technology and leadership.