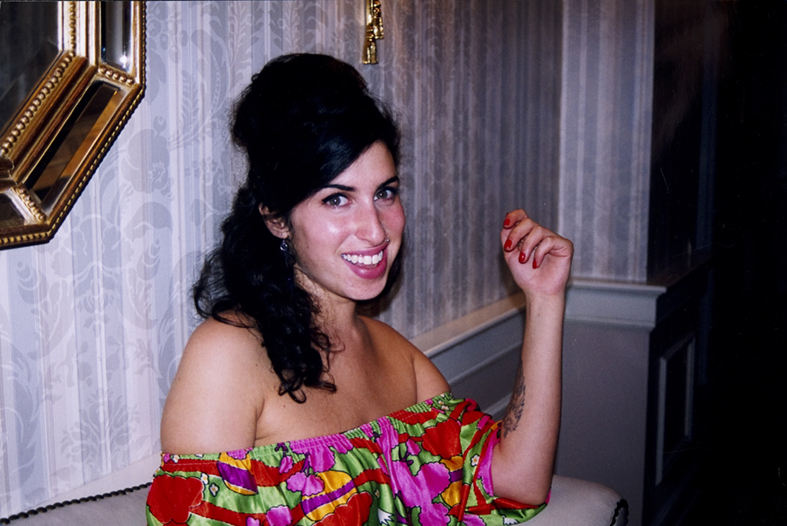 The London Jewish Museum is staging an original exhibition about music star Amy Winehouse, co-curated with her brother Alex and sister-in-law Riva. It is an intimate and moving exhibition about a much loved sister.

The family have given the Jewish Museum unprecedented access to Amy’s belongings, including her guitar, record collection and iconic outfits. Hosted in the heart of Amy’s Camden, this exhibition celebrates her passion for music, fashion, London and her family.
Amy was close to her family and had a strong sense of her Jewish roots and heritage. Among the various objects on display, the exhibition will show many unseen photographs of Amy’s family life – Friday night dinners, Alex’s Barmitzvah and vintage photographs of their beloved grandmother Cynthia.
Located in Amy’s Camden Town, the Jewish Museum is the perfect place to find out about the woman behind the music and beyond the hype. The exhibition runs from 3rd of July to 15th September 2013.
“Being Jewish to me is about being together as a real family… It’s not about lighting candles and saying a brocha.” Amy Winehouse, 2005.

Photographs are an important part of the exhibition and Amy’s own battered suitcase crammed with photographs of friends and family will be on display. It is this suitcase that Amy insisted her father come to look through with her a couple of days before her death in 2011 – the last time he saw her.

Amy Winehouse: A Family Portrait will take the visitor beyond the public hype to show them a more private side.

Her brother Alex Winehouse says, “Amy was someone who was incredibly proud of her Jewish-­‐London roots. Whereas other families would go to the seaside on a sunny day, we’d always go down to the East End. That was who we were, and what we were. We weren’t religious, but we were traditional. I hope, in this most fitting of places, that the world gets to see this other side not just to Amy, but to our typical Jewish family.”

Abigail Morris, CEO of the Jewish Museum, says, “Amy Winehouse was an immensely talented, iconic and inspirational singer and she was a Jewish girl from North London. It is fitting that the Jewish Museum in her beloved Camden Town should be the place to tell her story in the year that she would have celebrated her 30th birthday. We are very honoured that Alex and Riva chose the museum.”

This part of the exhibition will explore Amy’s Jewish background and the importance of her family and home. Amy’s paternal great-­‐great-­‐grandparents came over to England as immigrants from Belarus in the early 1890s and settled in the East End. Her great‐grandfather, Benjamin Winehouse and his wife Fanny ran a barbers shop on Commercial Street.
Amy was particularly close to her grandmother Cynthia. Glamorous, independent and stylish, Cynthia had dated the musician Ronnie Scott in the 1940s, and loved jazz music. Childhood memorabilia will be on show, including a Snoopy book, a character much loved by both Alex and Amy.

Amy was a Londoner through and through, and this was evident in her style, attitude and cultural references. Brought up in Southgate in north London, Amy was also a frequent visitor to the East End, where members of her family had lived. Amy later moved to Camden Town as her music career took off and became strongly associated with the area.
The exhibition will explore her connections with her home town through a variety of objects such as photographs of her in Southgate and Camden and possessions from her Camden Square home, such as a vintage bar.

Music
Amy was a passionate lover of music with eclectic tastes. Her love of music was passed down through the family – members of her mother’s family were musicians and her father also sings. Her love of jazz and big band were passed to her from her father, and her brother introduced her to musicians such as Ray Charles. Amy became passionate about performing at a young age and applied to attend Sylvia Young School. She later attended the BRIT school, and went on to perform with the National Jazz Orchestra. All of her influences were evident in the music that Amy wrote and performed – a fusion of jazz, hip-­‐hop and soul. Her later passion for 60s girl groups shaped the sound and feel of her second album Back to Black.

Amy’s record collection will be on display as well as passes for gigs and festivals. Her uniform from the Sylvia Young School will be displayed alongside her first guitar, which she originally shared with her brother, and a Grammy award will demonstrate the success and critical acclaim that Amy achieved during her musical career.

Throughout her career and up until her death in 2011, Amy was frequently photographed by the press. One of the reasons for this was her distinctive style. Her beehive hair and tattoos became iconic. Her style was the product of a mish mash of cultural references and influences, from 50s rockabilly to 60s girl groups. She also, whether consciously or subconsciously, drew upon the influences of her family, particularly that of her grandparents Cynthia and Alec. Amy later paid tribute to Cynthia with a depiction of her as a tattoo on her arm.

A selection of Amy’s clothing, both designer and high street will be on display in the exhibition, including the Luella Bartley dress she wore for her 2008 Glastonbury performance; an Arrogant Cat dress worn in the Tears Dry On Their Own video; a dress worn on Amy’s debut US TV appearance on the David Letterman Show; and a gingham dress that Amy designed for her collaboration with Fred Perry.