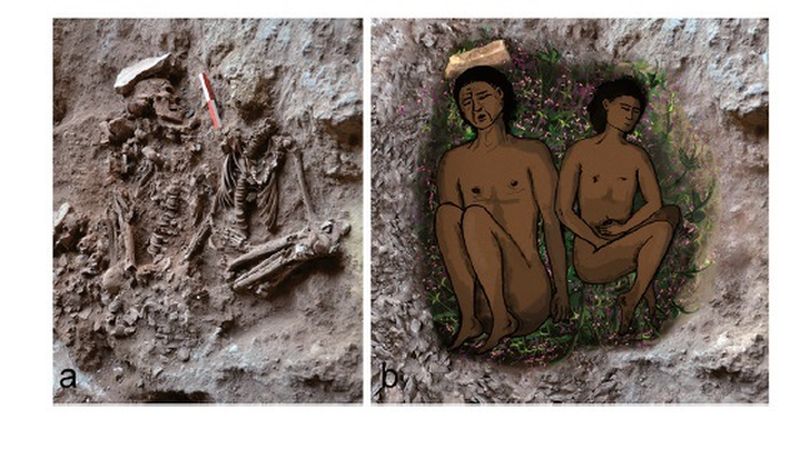 (Left) Field photograph of two skeletons (adult on left, adolescent on right) during excavation. Photo: E. Gerstein, Haifa University (right) Reconstruction of the double burial at the time of inhumation. The bright veneer inside the grave on the right is partially covered by green plants

–
When did people first begin to express their feelings with flowers? It turns out that in prehistoric times, Mount Carmel residents in what today is northern Israel buried their dead on a literal bed of fragrant wild flowers, such as Judean sage, as well as blooming plants of the mint and figwort families. Assuming they had the same positive associations with flowers that we do today, these ancient humans must have sought to ensure for the deceased a pleasant passage from the world of the living.

The discovery is the oldest known use of flowers in grave lining. According to radiocarbon dating performed by Dr. Elisabetta Boaretto at the Weizmann Institute of Science, the graves are 11, 700 to 13, 700 years old. Boaretto was part of an international team, headed by archaeologist Prof. Dani Nadel of the University of Haifa, who performed excavations in the Raqefet Cave overlooking the Mediterranean Sea. It had been inhabited by the Natufians, prehistoric hunter-gatherers who were widespread in the Near East. The findings were reported recently in the Proceedings of the National Academy of Sciences of the USA.

Boaretto and her group at the Weizmann Institute are currently exploring additional fascinating questions from the distant past, among them: When exactly did modern humans leave Africa, ultimately replacing the Neanderthals in the Near East and Europe? Is it possible to use the tiny mineral remains of plants for dating ancient sites? Did the collapse of empires in the Early Bronze Age occur earlier than previously thought?

To answer this question, Boaretto and archaeologist Dr. Omry Barzilai from the Israel Antiquities Authority have obtained a license to re-excavate Boqer Tachtit, a project scheduled to begin in October 2013. Setting up an on-site laboratory, an international team of scientists including colleagues from the Max Planck Society in Leipzig, will collect charcoal remains from the fireplaces left by the early settlers, as well as sediments, bone fragments and other materials that can help them reconstruct the lifestyle of ancient humans, in addition to accurately dating the time of occupation. Back at Weizmann, the samples for dating will be analyzed in the D-REAMS laboratory.
The analysis can enable researchers, for instance, to clarify the relations of early Homo sapiens with the Neanderthals, also thought to have inhabited the area. To know if those Homo sapiens interacted with these close relatives of theirs, it’s important to establish whether they actually inhabited the same regions at the same times. The study can also help researchers assess the pace of changes that took place in technology and lifestyle of the early humans.

The high precision of D-REAMS analysis might be crucial in yet another project, which concerns the chronology of a relatively close period: the Early Bronze Age, thought to have ended in the Near East some 4300 years ago. This is the period during which writing was developed in Mesopotamia and the first city states were created in the region. The end of the Early Bronze Age is defined by the abandonment of these cities.
Archaeologists have proposed that the city states had been abandoned due to the extreme drought known to have occurred in the region at the time. But in a recent study, Boaretto and her student Johanna Regev made a surprising discovery: At least in ancient Israel, the cities were abandoned – and, consequently, the Early Bronze ended – 200 years earlier than previously believed. This finding means that the theory linking the abandonment to dire climatic conditions no longer holds, so a new explanation is in order.
The revision might also have far-reaching implications for the study of the Bronze Age in the neighboring empires of Egypt and Mesopotamia, which were linked to ancient Israel by commerce and other ties. With the help of D-REAMS, scientists plan to explore the chronology of the Early Bronze Age further using material from different sites.

Dr. Elisabetta Boaretto’s research is supported by the Exilarch’s Foundation.

These questions are being addressed with the help of advanced equipment – the first of its kind in the entire Middle East – set up recently in the building that previously housed a particle accelerator. The newly-installed technology – the Dangoor-Research Accelerator Mass Spectrometer, or D-REAMS – is used to determine the age of archaeological samples by measuring the concentration of the radioactive carbon, or 14C. The method is based on determining the ratio between 14C and the stable carbon atoms, 12C and 13C: Since 14C decays over time while the amount of stable carbon remains constant, the fewer radioactive atoms are found in a sample compared to the stable ones, the older the sample.

In the past, radiocarbon dating required relatively large amounts of material, at least several grams, because it relied on measuring 14C indirectly, by observing its decay. In contrast, an accelerator mass spectrometer like D-REAMS, which accelerates atoms to high energies before analysis, directly counts the radiocarbon atoms. Its precision is remarkable, considering that for every radioactive 14C there are anywhere between a trillion to a quadrillion stable carbon atoms.
As a result, dating can be performed on a sample as small as a few milligrams. “For example, a 5-gram sample, the equivalent of a small sugar packet, could yield about 5, 000 measurements, ” says Boaretto, who heads the D-REAMS laboratory. “It is even possible to date a single seed.”
D-REAMS can shed new light on the distant past thanks to the high precision of its dating. It can, for example, help determine when our ancestors, early Homo sapiens, migrated out of Africa. One of their first stops in the Near East was the site of Boker Tachtit, located in a sun-scorched ravine in Israel’s southern Negev desert. Radiocarbon dating of the material from an earlier excavation of Boker Tachtit in the 1970s suggested that the site was occupied about 47, 000 years ago.

But the dating method at the time was imprecise, so the question has remained open: When exactly was Boqer Tachtit inhabited?
The ability to analyze minute amounts of material is particularly important for such prehistoric sites as Boker Tachtit, where most of the analysis is performed at the microscopic level. With the help of D-REAMS, it is possible to build new dating methodology and tailor the sampling of the material in the field to the chronological question being asked.
The small sample size might make it possible to develop an entirely new approach to the dating of archaeological sites – a possibility currently under investigation in the D-REAMS laboratory. The approach would rely on the minute amounts of organic material trapped inside phytoliths, the tiny silica particles produced by many plants. While organic matter from plants disintegrates quickly, the durable inorganic phytoliths remain intact over millennia, and are abundant in almost all archaeological sites. Even with the new technology, analyzing phytoliths for the purposes of radiocarbon dating poses an enormous challenge because they contain only about one-tenth of a percent of organic matter.