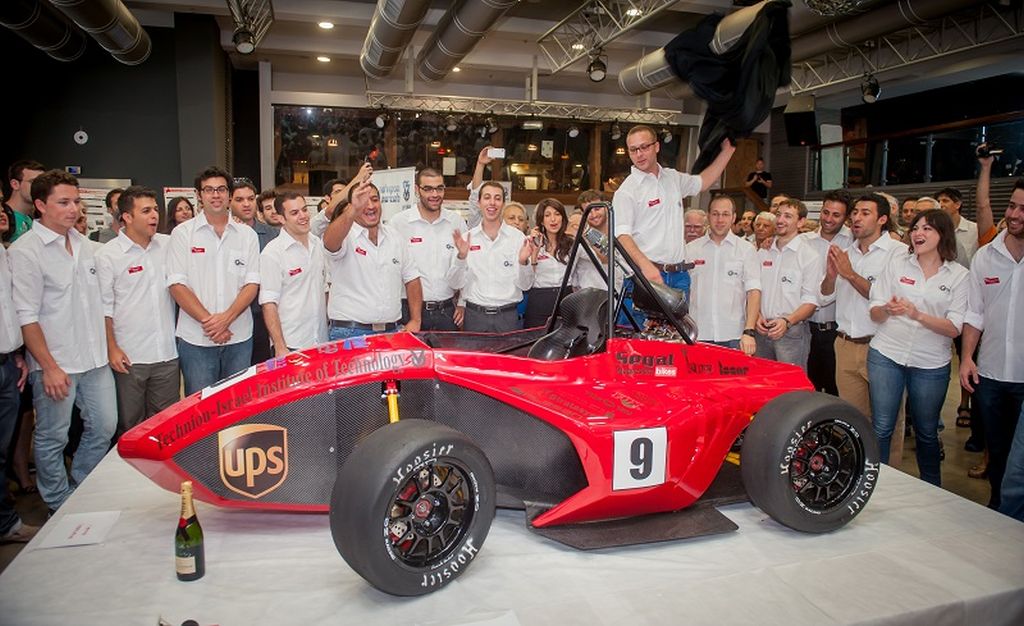 The Technion’s first Formula car was unveiled at an exhibition of design projects held by the Faculty of Mechanical Engineering. The new red, shiny vehicle will be competing in the Formula Student F-SAE against teams of students from 50 universities worldwide. The Formula Student F-SAE, a student design competition, is scheduled to be held in September 2013 in Verona, Italy.

Twenty-five students from various Technion faculties designed and built the vehicle themselves and it is now undergoing final stages of adjustment and fine-tuning. The vehicle’s maximum velocity is 170 km/h and it can accelerate from 0 to 100 km/h in only 4 seconds.

Ahmed Omri, a Technion graduate student and the project’s initiator and visionary, founded the Mechanical Engineering Faculty’s Formula Team 18 months ago. He prepared a presentation and invited students to his talk on the subject. To his amazement, 80 students attended the presentation and a team of 25 students was formed, both men and women, all sharing the vision of building a formula car that would participate in the international Student Formula competition. Prof. Reuven Katz, head of the design and manufacturing track at the Faculty of Mechanical Engineering, came on board the project. Prof. Katz secured a laboratory for the team and saw to it that all team members were enrolled in a final projects course. Omri was appointed project manager and the team was divided into smaller groups according to the vehicle’s sub-systems.

“Through various connections and a little luck we managed to recruit about $400, 000 from various donors, ” says Mr. Omri. “Some of this was in cash and some was in the form of support for manufacturing and logistics activities. We participated in exhibitions, erected booths, visited factories that contributed manufacturing capabilities, and we managed to get kart racing practice time at the Azrieli Mall in Haifa. Many people were skeptical about the project but it took off. During the construction phase we coped with two main challenges. First, there was the engineering challenge of constructing the car since we were all inexperienced and had never built anything before. The second challenge was the managerial challenge.”

Doris Pitilon, a mechanical engineering student, served as the group’s procurement and financial officer. “We divided up into groups and each group was responsible for a different system in the vehicle: engine, pedals, brakes, chassis, suspension, and shell. I was drawn to the project because I wanted to do something practical during my studies and not only theoretical things. Building the car is mechanical engineering at its best. The vision and challenge of building the vehicle were strong team-building elements. There were moments when we thought it wouldn’t happen, and now that I can see the car, I’m very excited and emotional.”
Michael Kootzenko, a 4th year aeronautics and space engineering student, was responsible for the car’s shell and design. “The minute I heard of the project I knew I was in, ” he says. “Building the car was for me a childhood dream come true. I’m responsible for the design of the vehicle and its aerodynamics. We built the car to be stronger than required and I’m very proud of the result.”

“We hope that we have started a tradition at the Faculty of Mechanical Engineering, one that will pass from generation to generation and each year will improve the vehicle’s performance by using modern design and analysis tools to effect technological improvements, as is customary in the best universities in the world, ” says Prof. Pinhas Bar Yossef, Dean of the Faculty of Mechanical Engineering.