Minister of the Economy Naftali Bennett on a visit to China was told his hosts would examine the idea. 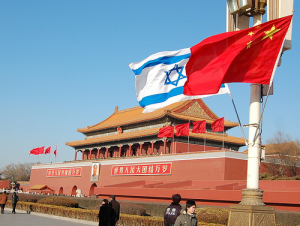 Minister of the Economy Naftali Bennett, who is currently on an official visit to China, today announced that he has reached an agreement with leading figures in the Chinese administration to conduct a special survey to examine the degree to which a free trade policy would be worthwhile, prior to signing a free trade agreement.

Sources in Bennett’s entourage said that Israel has over the past two years several times expressed major interest in conducting such a survey. However, the Chinese only responded positively, and unexpectedly today.

Such a survey is a precondition for talks to prepare a free trade agreement between the two countries. A senior source told “Globes” that such an explicit agreement to the survey had not been forthcoming during Prime Minister Benjamin Netanyahu’s recent visit to China.

Bennett is leading a delegation to China of leading Israeli ministry officials and industrialists. Officials in the Ministry of the Economy said that prior to Bennett’s current round of meetings with Chinese leaders both sides had already conducted internal surveys of how worthwhile such a bilateral free trade agreement would be and indications were that economic activity between the two countries would grow.

Estimates are that it will take one year to two years to complete the survey and its results will form the basis for a free trade agreement.
Bennett told “Globes, ” Trade between Israel and China totals about $8 billion annually and forecasts are that such an agreement would considerably increase the amount so that more and more small and medium Israeli companies could become involved in bilateral economic activities with China.”

Figures provided by the Ministry of the Economy’s foreign trade administration show that Israel’s exports to China in 2012 rose 0.9% to $2.74 billion. A large part of these exports comprise advanced technology electronics and communications products and machinery and equipment, and chemicals, and half of these fast growing exports can be attributed to the operations of Intel and Israel Chemicals Ltd. (TASE: ICL).

A senior figure in Bennett’s entourage told “Globes, ” “The Chinese pay major attention to Israel. The Chinese government has taken a strategic decision to strengthen economic relations with Israel and good things are happening between the two countries in this sphere. The Chinese agreement to launch a survey on the value (of the free trade agreement) surprised us. We had believed that such agreement would come at a later stage.”
Published by www.globes-online.com

READ MORE:  Establishing A Super-Win Partnership Between China And Israel / By Benjamin Peng