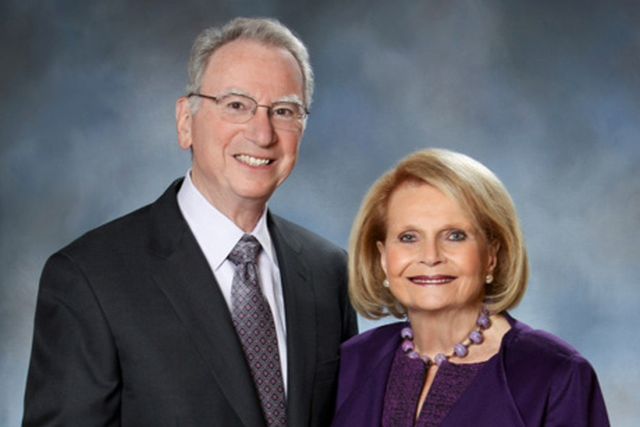 The fund-raising campaign for the new San Diego Central Library announced on Tuesday that Joan and Irwin Jacobs are promising to contribute up to US$10 million more to the campaign for the new library, now nearing completion, and to which they have already donated US$20 million.

The Jacobs’ made their latest pledge in the form of a challenge grant, promising to match all gifts up to $10 million in an effort to complete the library’s $75 million fund-raising goal.

The new library is due to open at the end of September at a total cost of US$185 million. Construction is being funded primarily from US$80 million in redevelopment property taxes, and US$20 million each from a state library grant and a 20-year lease payment from the San Diego Unified School District for its charter high school, which is to be located on two floors of the nine-story building.

To find the rest, the San Diego Public Library Foundation is working hard to find a total of US$75 million in private donations – US65 million for the building and another US$10 million to run it afterwards. So far the foundation has picked up $60 million in pledges of cash (one third already coming from the Jacobs’) and $15 million in a funding guarantee from an anonymous donor.

The new building will be three times larger than the existing Central Library in San Diego. “Obviously, we’re getting close to the time for dedication, ” Irwin Jacobs said in an interview with the newspaper. “Fund raising has done well but it’s not complete by any means. We thought this would be a way, perhaps, to encourage people to come along for naming gifts before the dedication, so their names would be up there.”

Katie Sullivan, Vice Chairwoman of the library foundation, said the Jacobs’ have been staunch supporters of the long-delayed project.

“I think they saw a need and offered it up, ” she said of the couple’s latest commitment. “It’s a very magnanimous gesture on the Jacobs’ part and hopefully that will entice people who have been considering doing it … this may be the thing that causes them to want to get involved.”

Most public libraries built in the U.S. today typically involve debt of one kind or another – e.g. bond issues or capital improvement financing by states, counties and cities. San Diego it seems is one of the few with such a large proportion of private gifts and no public debt attached.

Jacobs said he admired the concrete work, the nooks and crannies and the auditorium of the new building. “We just love it, every time we go there … it’s a fantastic structure, ” Jacobs said.

Irwin Jacobs, who is 80, is an electrical engineer, a co-founder and also former Chairman of Qualcomm Inc. Today he remains CEO Emeritus of Qualcomm, with his son Paul having succeeded him as Chairman and CEO in 2009. He is also Chairman of the Board of the Salk Institute for Biological Studies.

He was born in 1933 in New Bedford, Massachusetts. He earned his B.S. degree in electrical engineering from Cornell University in 1956, and his Master of Science and Doctor of Science degrees in Electrical Engineering and Computer Science from the MIT in 1957 and 1959, respectively.

Jacobs then became an Assistant and Associate Professor of Electrical Engineering at MIT from 1959 to 1966 and Professor of Computer Science and Engineering at University of California, San Diego from 1966 to 1972. He co-authored a textbook entitled Principles of Communication Engineering in 1965, which is still in use today. UCSD’s Jacobs School of Engineering is named for him and his wife Joan.

In 1968 Jacobs co-founded Linkabit Corporation with Andrew Viterbi to develop satellite encryption devices. That company merged with M/A-COM in 1980, becoming M/A-COM Linkabit. In 1985 Jacobs went on to co-found Qualcomm to make advanced two-way mobile satellite communications and tracking systems. He pioneered Code Division Multiple Access (CDMA) communication bandwidth systems which are more efficient than older time-division technology. Qualcomm’s CDMA has been adopted as one of two digital standards for the latest generations of cellular telephones in North America and whose chips are deployed by the millions by Apple in its iPhones and others.

Jacobs and his wife Joan Jacobs are contributors to public arts and education in San Diego. For this, Jacobs was awarded the Woodrow Wilson Award for Corporate Citizenship in 2004.

As the co-founder and chairman of Qualcomm, Jacobs has contributed hundreds of millions of dollars to the field of education through generous donations and grants to several schools and organizations, especially in the San Diego area and to MIT in the United States and to the Technion in Israel. In August 2010, Irwin and Joan Jacobs both joined the Giving Pledge, pledging to give away most of their fortune to philanthropy. The Giving Pledge consists of around 40 American billionaires who have agreed to pledge 50 percent or more of their wealth to philanthropic causes.

Jacobs is married to New York City native, dietician, and fellow Cornell graduate, Joan Jacobs (née Klein) since 1954. They live in La Jolla, California, and have four sons. Their son Paul E. Jacobs is CEO of Qualcomm. Jeff Jacobs is the Chief Marketing Officer of Qualcomm. Hal Jacobs the second oldest, played on the 1985 USA Maccabi volleyball team, and is a co-producer of the musical Jersey Boys. Their eldest son Gary Jacobs is the head of the board of the Gary and Jerri-Ann Jacobs High Tech High Charter School. Jacobs’s grandson, Adam Jacobs, is a former catcher of the Cornell University baseball team.