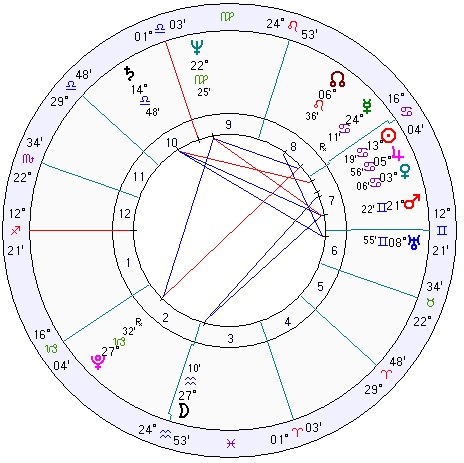 July Stars configuration shows Mercury in retrograde in Cancer while Jupiter is making a visit with Cancer but clinging to a visit to the U.S. Jupiter. The last time this pattern appeared, it was September 11, 2001. The U.S. — and the whole world with it – had a mighty jolt.

This period of adversity will begin in July and peak in mid August.

Mercury in retrograde brings breakdowns in communication. Corporate entities in the field of telecommunications, the media and journalistic enterprises are liable to suffer financially and economically during this period.

Strikes characterize periods when Mercury is in retrograde, which will just add to the looming losses measured in countless millions. The strikes will be due to protracted conflicts that have bogged down for a long time by now.

The first week of July heralds the first difficult week of the summer.

From mid-July Saturn is no longer retrograde while creating a nice triangular aspect with Neptune and Jupiter that then will be joined by Mars coming to visit Cancer. Better opportunities will appear regarding real estate in general and residential properties in particular.

Once again a threat of war is looming, as we have experienced it in March of this year. The involvement of the superpowers in global events can greatly affect the markets, which is what endangers the financial arena.
Between 6-7 July (in Israel) we will experience a threat of serious accidents or an unexpected event that could affect the financial market.

Between 7-8 July surprising events or news will awaken hope in the global market. Sudden unexpected gains will materialize.

Between 7-10 July extreme conditions will materialize, as the sun clings to Mercury in retrograde. Communication failures will reach a record high, including the crash of servers, modems, computers; there will be delays affecting transportation and disruptions due to strikes.

(On 9 July Saturn will end its retrograde motion but only on the 16th will it resume its forward progression).

The period between 10-20 July will be one of great hardship during which one ought to avoid initiating financial activity. It will be difficult during this timeframe to build on the availability of financial liquidity. Extreme situations may pose threats to financial stability.

On July 14, water-related disasters may occur, accidents and flooding in different locations in the world.

Between 17-19 July momentous events will transpire in the world, generated by extreme overly optimistic outlook that, in turn, may propel the markets in concert therewith.
But, with Mercury’s retrograde movement in the background disinformation may be produced, data will appear generating high levels of optimism that may quickly turn out to be inaccurate. Beware of getting carried away.

On the 23rd of July the sun moves into Leo. The atmosphere will become more extreme and reactions will correspond to it.
At the same time, Venus moves into Virgo (a sign dealing with work and functioning). Mercury ends its retrograde movement and slowly everything will return to normal.
Now comes a week that will be the second toughest week of this extreme summer.

Between July 24 and August 1 a particularly violent aspect returns to the heavens, highlighting threats of war, traffic accidents, volcanic eruptions and severe natural disasters.
August will be one of the most challenging months, economically. More on the matter, below.

*In relations to the U.S. chart, the retrograde movement of Mercury in Cancer will result in the formation of critical aspects, especially in the relation to Saturn. The entry of Mars into Cancer and its encounter between 15-18 July will result in events having great impact on the country’s economy. Reports relating to employment conditions may suffer from the effects of disinformation.

*Economic events may affect the European Union between July and August and weak economies will grow weaker.

* Mercury’s retrograde motion will have an effect on the Japanese economy for the House of finance in its chart is subject to the influence of Mercury.