–
Leon Black does have a heart after all; and probably a sweet tooth too it seems…
– 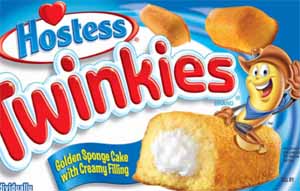 American snack and cookie producer Hostess Brands went bankrupt last Fall when union troubles and under-funded pension obligations finally pushed it over the edge after years of difficulty. Brands were sold off and some were purchased in March by private equity mogul – and fine art lover – Leon Black’s Apollo Global Management. The expectation was, which we wrote about in this newspaper in March, that the ever-popular Twinkie, at the very least, would survive the shake-out and re-enter production though at the time we did not know when.

It now turns out that commencing this July 15th, Twinkies snack cakes (plus some other products from Hostess Brands) will be back on retail store shelves again in the United States. The return of the popular snack cake would certainly signify the re-emergence of a revived company, which also produces other cake brands. Packaging for the returning products will likely adopt a tag line that reads: “The Sweetest Comeback in History Ever.”

Twinkies’ previously desperate loyal fans and consumers are now apparently eagerly anticipating the return of the cakes. Hundreds of thousands of them have already “liked” the brand across all the social media sites. Hostess’ online web site is now actually running a count-down by the second towards the day when the big comeback for Twinkies and its other products is set.

Hostess Brands Inc. struggled for several years before it finally filed for bankruptcy reorganization early last year. Workers instantly pointed fingers at management for the failure. But the failed company itself blamed higher medical and pension costs for its unionized employees. In November, 2012 liquidation of Hostess was finally announced; this of course triggered panic buying for all Hostess snack cakes. The popular brands of snacks and cakes made by the company vanished from stores everywhere within hours.
Hostess Brands sold some of its brands to other companies and then two private equity companies Metropoulos & Co. and Apollo Global Management jointly acquired what was left of the failed company for US$410 million – not exactly chicken feed. With the new Hostess Brands 2013 edition, cross-promotional marketing with the two acquirers’ other respective businesses can be expected. Apollo currently already owns fast-food chains Hardee’s and Carl’s Jr., while Metropoulos & Co owns Pabst Brewing Co. Hostess Brands will obviously now be cut down to a more cost-effective operational structure compared to its predecessor, and moreover operate without unionized workers. The new business will deliver directly to wholesale distributors, who will in turn supply retailers. In doing so the company will reach many more convenience and retail stores nationwide than before. The new company has also cut-down the number of its baking production facilities from 11 to four.

Some of the products may well change, though not radically – no New Coke story here. Maybe there will be improved textures and some new flavors may be introduced. New attributes may also be looked at such as additional fiber, gluten-free, lower sugar, and lower sodium content. However, prices for the famous cakes will not budge. A box of ten will still cost you just US$3.99 per box.

Unless there are major hidden real-estate assets tucked away somewhere, all this proves is that private equity players are not always the heartless ruthless players we take them to be. I bet Leon Black grew up on Twinkies as a kid and just didn’t want to let it go.

And even more about Leon Black here : The man who saved the twinkie