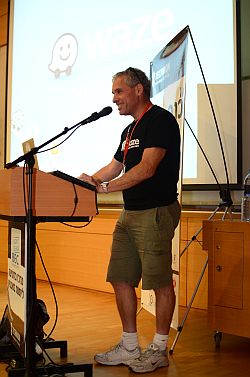 Waze, the Israeli social GPS app, recently made one of the biggest exists in Israeli history. Co-founder Uri Levine spoke publicly for the first time since the purported $1.03 billion sale to Google, at the Israeli Entrepreneurship Conference at the Technion in Haifa. The startup man addressed the sale, but also spoke about the company’s early days and its journey to success.

“On the one hand it is a great feeling [to have sold Waze]. On the other – they took away my baby!” Exclaimed Levine at the beginning of his talk, before explaining just how that baby journeyed from a three-person startup to global success.

Levine spent some time breaking down the behind-the-scenes work that has gone into Waze. The application, which began to take form in 2008, is community-based at its core. The first versions of the app were essentially a blank page with a map that was fully created by users as they drove and passed on GPS location points to the software.

Eventually a full map was built in the system – with users providing everything from street names to gas stations. Levine said that in the early stages, if he and or his partners encountered a road that wasn’t on the map, they would drive through it a number of times, taking every possible turn, so that the system could integrate it.

Knowing how to prepare

This type of work was essential when raising the first round of funds. “We had an important meeting with potential investors, ” Levine said. “We did some intelligence work and found out where they each live. We made sure all their houses were on the Waze map. At the start of the meeting, one of the investors inevitably asked, ‘are you trying to tell me that I will find my house on your map?’

“Of course, I said, and innocently asked, ‘Where do you live?’ His house popped up on the map, his eyes widened and I could see dollar signs in them, ” Levine confided to a giggling audience.

The company hasn’t stopped growing since that first meeting, and as Levine expressed, he sees a lot more potential for it. “There are more than a billion vehicles in the world, ” he said, “we have 150, 000 new members every day. We have a lot more space to develop.”

He cheekily added that “a Google user travels an hour and ten minutes from Los Angeles airport into the city. With the new Google, the drive will be 23 minutes.”

“The exit is not what drives the entrepreneur”

Levine, knowing his audience consisted of students and entrepreneurs-to-be, gave a number of tips to the eager listeners. He stressed that it is very important to him, and to every entrepreneur, that the company he establishes have a fun work environment – that people will leave if they aren’t enjoying themselves. “The exit is not what drives an entrepreneur; rather it is the tremendous urge for change and challenge. Remember that the journey is what is important.”

He also told them to focus on one goal and make their mistakes quickly. Most importantly, he left them with a warning: “If you go to sleep with an idea, and in the morning it is still there – go for it. But you need a lot of passion and a lot of willingness to sacrifice. This is a rollercoaster, and for those of you who don’t like rollercoasters, I advise you not to get on to the entrepreneurship train.”