The smallest man portable missile made by Rafael gives special unit’s capabilities they never had before. “Our Mini Spike missile attracts attention from many armies and special units that need that kind of firepower”  says Oron Oriol,  Rafael’s executive VP marketing . 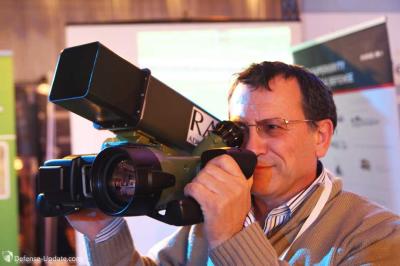 The mini-Spike missile system, the smallest member of Rafael’s electro-optically guided missiles, is the first implementation of an anti-personnel precision attack, wireless guided missile, designed for operation at the company and platoon level.

This man-portable missile system weighs about 12 kg, and comprises of a command and launch units facilitating target acquisition and wireless control for the missile, weighing 4 kg and missiles stored in a canister-launcher, weighing 4 kg each. Typically a soldier will carry the CLU and two missiles with other members of the unit carrying spare missiles.

The imaging sensor is located in the transparent bubble in the forward section , ahead of the electronics section, guidance systems and servos, warhead and rocket motor all packed into the small missile tube. The Mini-Spike can be operated with its integral command launch unit or with existing Spike family launchers, utilizing the CLU, tripod and launcher assemblies. The missile can be fired at targets at ranges of 1, 200 meters and can be set to approach the target in a low, medium or high angle of attack, enabling effective engagement of concealed targets. Furthermore, the warhead can be deactivated in-flight, offering the user to pursue a ‘low collateral damage’ precision attack employing kinetic only, rather than kinetic-explosive effect, when low-signature effect is required or to eliminate the risk of hitting no-combatants.

In this article:Israel, Missile, Rafael, Finance