The Conseil Représentatif des Institutions juives de France (CRIF) that acts as the umbrella representative body for all the Jewish organizations in France has chosen Cukierman to take up the role for an unprecedented third time. 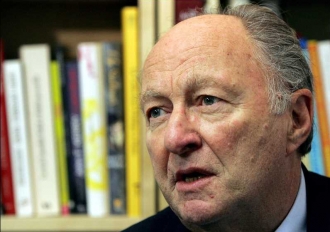 In the turbulent times that the Jewish community in France, currently believed to number around 600, 000, is going through at present, Cukierman will need to call upon all his knowledge and experience to help keep the community together. That is why the veteran Parisian was probably elected by the General Assembly, after a second round of voting, taking preference, with 61 percent of the votes against the 39 percent that opted for Aria Bensemhoun, current leader of the Jewish community of Toulouse. More than 72 CRIF member associations took part in the election.

Cukierman comes into the role the wealth of life and financial experience held a senior executive position in the banking group Edmond de Rothschild.

The new/old president was voted in on the stated mandate to help the Jewish community of France to stand up in their relentless, constant and determined fight against anti-Semitism and the respect of memory. “I want a CRIF that is stronger, strictly independent and open to the civil society as a whole, ” Cukierman was reported as saying when he was elected

The CRIF was formed in 1944 by the Jewish community in France Nazi occupation, and includes the majority of the major Jewish organizations in the country, with the notable exception of the Central Consistory who parted with the institution in 2004.

Meanwhile Dr. Moshe Kantor, President of the European Jewish Congress (EJC), offers his congratulations to Roger Cukierman, on his appointment stating that Mr. Cukierman represents a wealth of knowledge and experience which will be necessary for French Jewry in the years ahead, ” “Roger has represented French Jewry in the past and we look forward to working closely with him as we face many challenges ahead.” Kantor summed up

CRIF is as an affiliate national organization of the EJC, the democratically-elected representative body of European Jewry, as well as being closely affiliated with the World Jewish Congress. It is common practice that it’s incumbent president is automatically given the role of a vice-president of the WJC Conseil Représentatif des Institutions juives de France

Roger Cukierman also holds the role as treasurer of the Foundation for the Memory of the Shoah in France.

In this article:World Jewish Congress, Finance