Valeant Pharmaceuticals International of Canada, and Bausch + Lomb Holdings Incorporated, a global eye care company based in Rochester New York, today announced that a definitive agreement has been entered into under which Valeant will acquire Bausch + Lomb from its owner Warburg Pincus LLC  for approximately $8.7 billion in cash.

Under terms of the agreement, Valeant will pay aggregate consideration of $8.7 billion in cash, of which approximately $4.5 billion will go to an investor group led by Warburg Pincus and approximately $4.2 billion will be used to repay Bausch + Lomb’s outstanding debt.  Valeant states that it expects to achieve at least $800 million in annual cost savings by end of 2014 from the investment. Bausch + Lomb expects to have revenues in 2013 of approximately $3.3 billion and adjusted EBITDA of approximately $720 million.  The transaction is expected to be immediately accretive to Valeant’s cash earnings per share.  Assuming the transaction occurred on January 1, 2013 and assuming the full realization of synergies, the acquisition would have been approximately 40% accretive to Valeant’s expected 2013 Cash EPS.

The transaction will be financed with debt and approximately $1.5 – $2.0 billion of new equity.  Valeant has secured fully committed debt financing for the transaction from Goldman Sachs Bank USA.  Taking into account the anticipated equity raised, Valeant’s debt to pro forma adjusted EBITDA ratio is projected post-acquisition to be approximately 4.6 times.

Bausch + Lomb will retain its name and become a new division of Valeant.  Valeant’s existing ophthalmology businesses will be integrated into Bausch + Lomb, creating a global eye care platform with estimated pro forma 2013 net revenues of more than $3.5 billion.  The acquisition positions Valeant to capitalize on growing eye health trends driven by an aging patient population, an increased rate of diabetes and demand from emerging markets. The combined business will also benefit from access to a strong product portfolio and a late stage pipeline of innovative, new products.

The transaction, which is expected to close in the third quarter, is subject to customary closing conditions and regulatory approvals.

Valeant shares rose nearly 8 percent in Toronto to CAD $93.71, touching an all-time high. It had gained 13 percent on Friday following reports a deal was in the works. The company’s stock has multiplied six times over in about three years, with Valeant racking up some 60 deals since 2008.

Bausch & Lomb is by far Valeant’s biggest acquisition to date, and will place it roughly among the 15 largest global pharmaceutical companies, said Valeant Chief Executive Michael Pearson in an interview with Reuters. 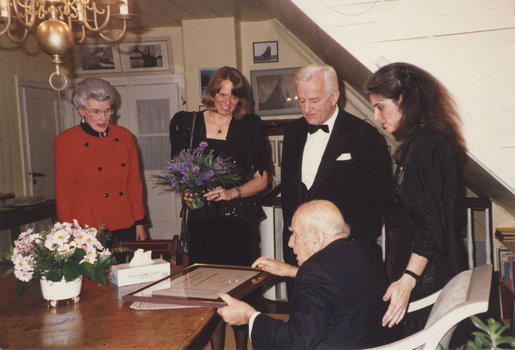 The firm was founded in 1939, by Eric Warburg of the German Warburg banking family when he fled to London from the Nazis. In 1966, E.M. Warburg merged with Lionel I. Pincus & Co, forming a new company that eventually became known as E.M. Warburg, Pincus & Co.

In 1965, when Eric Warburg retired and went back to live in Germany, control was handed to Lionel Pincus, a partner in the Ladenburg Thalmann investment bank, and the working language of the office switched from German to English. Lionel ran the company from 1966 to 2002, and died in 2009.

The takeover by Valeant also means a very large profit for Warburg Pincus, which led the $4.5 billion leveraged buyout of Bausch & Lomb in 2007, much of the debt for which was placed downstream in the acquired entity at the time. The firm already benefited from a $772 million special dividend that Bausch & Lomb paid out just two months ago, a large portion of which went to them.
With this transaction, Warburg Pincus is believed to have made as much as a threefold return on its own portion of the investment.
Warburg Pincus began exploring a sale or initial public offering for Bausch & Lomb late last year and held preliminary talks with a number of potential bidders, including Valeant, without reaching agreement on price.
Instead, Bausch & Lomb filed in March of 2103 for an initial public offering as an alternative means of providing liquidity to its investors.
Until last month, Valeant itself was reportedly pursuing a takeover of a different company, the generic drug maker Actavis, in what would have been a deal worth over $13 billion. When those talks collapsed, Valeant then turned to Bausch & Lomb and renewed their earlier conversations. Mr. Pearson said the bulk of the work on the announced transaction took place over the last week, as much of the initial due diligence had already been completed.
Though Valeant’s offer was lower than the valuation that Bausch & Lomb might have raised in an initial offering, it allowed Warburg Pincus to exit its investment quickly. Taking the company public would have meant a more gradual sale over two to three years.
A home run indeed, though in London they call Baseball “Rounders” and it is a game played mainly by children.  Not here though.