–
Some of Barrick Gold Corp’s Investors Get VERY Restive.  Message to Peter Munk: Why Stick Around if  Investors Don’t Appreciate You?
– 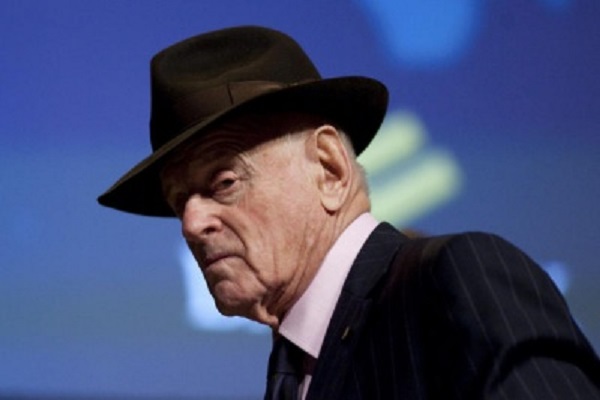 –
The Government of Chile has just fined Barrick Gold, the world’s largest gold producer, 8 billion pesos, about US$16 million, for environmental violations during the construction of its giant new gold mine there at Pascua-Lama, straddling both sides of the border with Argentina.

The Chilean mining regulator has also blocked further construction of the mine, at least on the Chilean side of the border, until Barrick puts in place the protective mater management systems it promised for protecting ground water so that the water supply for local residents is safe.
Barrick said it accepts all aspects of the resolution.

‘‘We deeply regret that Pascua-Lama has suffered inconveniences in its construction and we’ll do our best efforts to straighten the road ahead and meet the conditions stipulated in the approved project, ’’ said Eduardo Flores Zelaya, president of Barrick South America and Senior Vice President of Pascua Lama. ‘‘We respect the institutions of the countries where we operate therefore we will act according to the resolution.’’

Argentine authorities however have insisted that Lama, their side of the bi-national project, will proceed with or without Chile, taking advantage of the infrastructure already in place for its Veladero mine, which is already producing ore just down the hill from the new mine. But most of Pascua-Lama’s 18 million ounces of gold and 676 million ounces of silver areon the Chilean side of the border.

In a way the outcome of the investigation against it by Chilean authorities is a relief, as it at least now brings clarity to Barrick’s plans for the mine – which has so far ballooned in cost from an estimated US$3 billion likely to almost US$9 billion by the time it will all be finished.

If you ask why it cost so much, and why so many promised environmental safeguards were ignored thus far – it all comes down to Barrick having failed to appoint a construction manager for the mine and instead tried to save money by doing it all by itself and failing miserably. Barrick now has belatedly appointed one to finish the project and of course to demonstrate to the Chileans that it will be safe to proceed further.

Very much a baptism of fire for Jamie Sokalsky the new Barrick CEO who took office last year in a planned move to gradually replace Chairman Peter Munk – the Canadian entrepreneur who came to Canada from Hungary as a young man and who founded the company, but who is now 85 years old.

And as if that wasn’t bad enough Barrick has recently also had to renegotiate its lease in the new Pueblo Viejo mine in the Dominican Republic after local politicians there demanded a bigger cut of the pie for their country – waiting to make the demand until the new mine was finished.

Finally, in recent months the price of gold has dropped by 25% from US$1, 800 to a current US$1, 350 an ounce making several of Barrick’s smaller mines – it has 27 altogether – close to marginal economically.

With all this going on the shares have by 50% in the last six months, and are only a third of their peak value in 2011, and at $19 currently in New York trade at levels not seen since the Fall of 2008. Accordingly many of the company’s institutional shareholders are getting restive as a result. The company’s annual meeting in the end went smoothly though at the end of April and two weeks ago the dissatisfaction did not stop Barrick from issuing $3 billion of debt securities.

People in business, especially institutional investors, are rarely sentimental, at least when it hits their pocket books but this time around it seems some of them are behaving badly when it comes to Peter Munk when they talk resentfully of his being out of touch.

Here is a man who built Barrick Gold absolutely from scratch, first as a successful hotel company from boutique offices in tony Hazelton Lanes in Toronto, until one of its prime properties was expropriated by the Egyptian Government; then as an oil exploration company, with somewhat mixed results, and finally and winningly as a mining company by merger with another public company, with the merged entity going on to become one of the top gold producers in the world. Year in and year out the stock over-performed.

Along the way the value he created is in the billions of dollars, and he and his fashionable wife Melanie were fêted in the best Canadian, and later international, society circles. But that is all, as they say, yesterday and institutions who turn over their personnel every three or four years have no memory; there is only the last year of results and the expecting coming quarters’ that they care about now.

Commodity cycles have come and gone, inflation has come and gone and unfortunately, with the latest swing of the pendulum, it has left Barrack a financially over-leveraged company that probably made some poor acquisitions resulting in a high average cost of gold at a time when the price of gold is still sinking fast. He is not alone in this; Rio Tito and BHP Billiton have also done the same as each tried to outdo the other in building mega-mining projects to take maximum bragging rights. And even Swiss commodity and mining giant Glencore was skating on thin ice as well until it managed to merge recently with its own affiliate Xstrata, to obtain full access to its cash flows and fix its balance sheet.

All these deals were predicated on unlimited growth from the world’s economic engine China – the vacuum cleaner that sucked in raw materials from all corners of the globe seemingly endlessly. Well today even China has slowed down, at least for now.

At the time the deals were done everybody cheered; stock positions were adjusted, profits were taken; now everyone is recalibrating their personal memories and disclaiming any responsibility to share the blame. With over $40 billion of mining assets reportedly on the block around the world though this is no time for faint hearts…..

And to cap it all the United States did not sink under the weight of the financial crisis that began in 2007, one that threatened its solvency and the financial stability of the entire world. As a result gold has already ceased to hold appeal for flight capital as a substitute for the dollar in a financial system that has essentially instead totally stabilized, even with the troubles affecting the European zone. Quite remarkable and the gold price still seems to be dropping inexorably as a result as an asset class with zero yield in a world of essentially zero inflation.

Where he once exercised significant ownership control, as well as entrepreneurial rights of management, Peter Munk steadily diluted his own holdings as the company got larger until today he owns less than 0.2% of the company. Nevertheless over the years he has made huge amounts of money for his investors and, even now, probably would be in a position to weather the storms of criticism more easily but for some enormous compensation payments to him and his colleagues made in 2012 that clearly show him to be “insensitive”, at best, given the context of falling profitability that now surrounds him, or heuristic if you accept the criticisms of him now been thrown his way.

At 85 years of age he is still young and he might just tell them all where to go at this point; but I doubt it – Peter Munk is a man who stays the course. The rising tide of the next commodity cycle may be some way off but it will then, again, float a lot of boats… Peter Munk will likely be there to ride the wave. And his son Anthony sits on the board too to help him.

Peter Munk was born in Hungary. After escaping from the Nazis with his parents in 1944 he came to Canada where he graduated in Electrical Engineering in 1952 at the University of Toronto.

A budding entrepreneur with a strong flair for design his first business was Clairtone which manufactured high-end stereo systems and televisions. Successful for a time it eventually failed and he and his partner were left under a cloud for a time.

But failure breeds success if you have the right stuff and he soon bounced back with Southern Pacific Hotels an international hotel chain which was doing very well until the Egyptian government expropriated one its prime properties beside the pyramids.

After a brief stint in the oil and gas exploration business, called Barrick Resources, he then ended up back-merging into a mining company that went on to become the world’s largest gold producer Barrick Gold Corp.

Divorced with three children, and re-married to Melanie with whom he has two more children, he has also given many millions to charities, particularly the Toronto General Hospital and the University of Toronto.