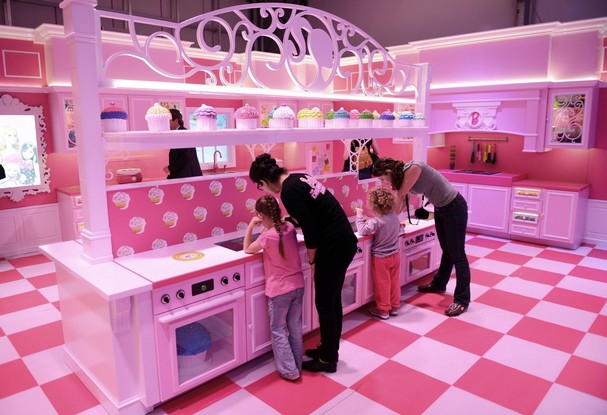 The Barbie Dreamhouse opened its doors in Berlin last week, and demonstrators and journalists were out in force.

The answer to many a young girl’s dream was put up by EMS Entertainment not far from Alexanderplatz in the heart of Berlin, a theme park in pink and white. The entry fee for children is 12 Euros, about 15 US dollars; their parents will pay more. The exhibit remains in the German capital until the end of August and then moves on to other locations.

The organizers had likely hoped the grand opening would have a more traditional form of headlines, but it was not to be.

The house is not even made out of bricks and mortar at all: walls are made of canvas, the columns are of plastic, and the windows and curtains are just painted on.

Protesters were happy to have a convenient target and they grabbed the limelight even before the exhibit even opened. The place is nothing but “sexist propaganda” for children, a spokesman for the group Occupy Barbie Dreamhouse told a left-leaning local newspaper.

During the build-up to the opening, lots of people go to voice their disapproval of the temporary theme park. Then finally, last Thursday the demonstrators finally got their fifteen minutes of fame and a chance to show just how angry they can be. By early afternoon, an activist with the women’s rights group Femen climbed onto the gigantic shoe in the middle of the plaza dressed only in a mini-skirt, carrying a burning cross on which a Barbie doll had been crucified. Parents and children stood nearby. The protesting women yelled out hoarsely over and over again: “Being Barbie is not a career!” 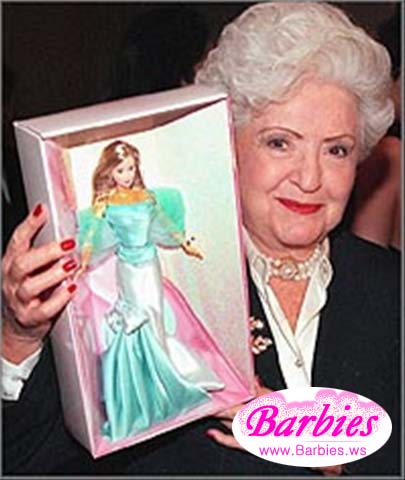 It is hard to see what the fuss is about though as Barbie has been entertaining small children successfully for several generations since Ruth Handler came up with the idea of copying a small German doll “Bild Lilli” more than fifty years ago and gave the idea to her husband to implement, who was one of the founders of Mattel.

A similar Barbie house in the Toys R Us store in New York’s Times Square has also been operating for ages without controversy by comparison.

This is of course not the first time either that Barbie has been criticized for limiting the abilities of women by restricting them to a stereotypical household image, make-up and high heel shoes, but this level of protest was qualitatively and quantitatively a whole new level.

Ruth handler was inspired originally by the idea to impress an adult female image onto a new kind of doll after seeing her own young daughter playing for hours with paper dolls and appointing them with adult roles. The first image of Barbie, actually even named after Ruth’s daughter also called Barbara, was copied from the German doll Bild Lilli, whose manufacturing rights were then bought by Mattel, and later Bild Lilli production was stopped and completely replaced by Barbie. Mattel also produced a series of companions for the dolls, and she has a romantic “near-relationship” with male doll Ken, though some have distinctly questioned his virility over the years.

In 2009 Barbie celebrated her 50th Birthday, which became an event for a major fashion show in New York with showcase fashions presented by many of the most prestigious fashion designers.

Barbie’s body has been constantly criticized for her not realistically thin waist-line and originally out-of-proportion big breasts. In 1997 Mattel redesigned Barbie’s body, giving her a wider waist.

Then in 2004 Mattel introduced the Color Tier system, especially designed for its collector’s edition of Barbie, which came in four colours- pink, silver, gold and platinum. Each color represented the number of Barbie dolls which had been produced.

Sadly, Mattel did not escape the legal battles all too common in the toy industry: from 2008 till 2011 there were ongoing court hearings between Mattel and MGA Entertainment. Mattel was suing MGA, alleging that Bratz dolls creator Carter Bryant, who earlier worked for Mattel, developed the idea of a creating Barbie’s biggest competitor, while still being employed by Mattel. Mattel won.

Today Mattel controls nearly 16% of the $20 billion U.S. toy market, including Barney, Thomas & Friends. Mattel also has a reliable fresh hit on its hands- Max Steel, an 11 year-old action figure positioned as the ideal doll for boys, aged 6 to 12, though GI Jo might complain about that.

As a postscript, one father has commented that his daughter loved Barbie dolls as a child and she ended up with a collection of 34 of them, primarily supplied by her then over-compensating, divorced, single parent. Once she reached eighteen and went off to university however she felt that was enough and gave them all away to a bunch of small children – today her collection would have become quite valuable. “I just didn’t need them anymore” she said at the time. So perhaps all this fuss is distinctly overdone after all.

In this article:Germany, Berlin, German, Finance