RETURNING to my room from breakfast, four visitors barred my way. Eyeing me curiously and expectantly with horns raised, the four ibex, realising no food was forthcoming, trudged away, heads held high in search of richer pickings.

Such is a typical guest experience at Beresheet, Mitzpe Ramon, undoubtedly Israel’s most unusual hotel – and one of its very best.

It appears to be in the middle of nowhere. I saw Beresheet being built almost three years ago. It was just a construction site and there seemed to be nothing for miles around which is probably because I  approached it from the Negev desert. That’s the beauty of five-star Beresheet and its tranquility.

The reality is that it overlooks the Ramon crater and the desert on three sides. On the fourth is Mitzpe Ramon, a small town of which guests can be quite unaware.

Isrotel founder David Lewis, who died just over a year ago, acquired the site a quarter of a century ago and sadly did not live to see his dream realised.

Beresheet is in the least likely location for a hotel. It must have taken incredible vision to select the site which is in a conservation area. It says much for Mr Lewis’s understanding of the hotel industry that a hotel now overlooks the Ramon crater (or Machtesh Ramon, in Hebrew). But environmentalists need have had little concern.

The building materials are rocks from the actual site of Beresheet, parts of whose grounds appear as if landscaping has never been completed. That is the very essence of the place. It has blended in so well with its surroundings that it now appears to be part of them.

The opening of Beresheet has also boosted the local economy with 250 new jobs being created and produce, including bread, greengrocery and wine being sourced locally.

The hotel is another example of the fulfilment of David Ben-Gurion’s vision  for the development of the Negev’s population and commerce. 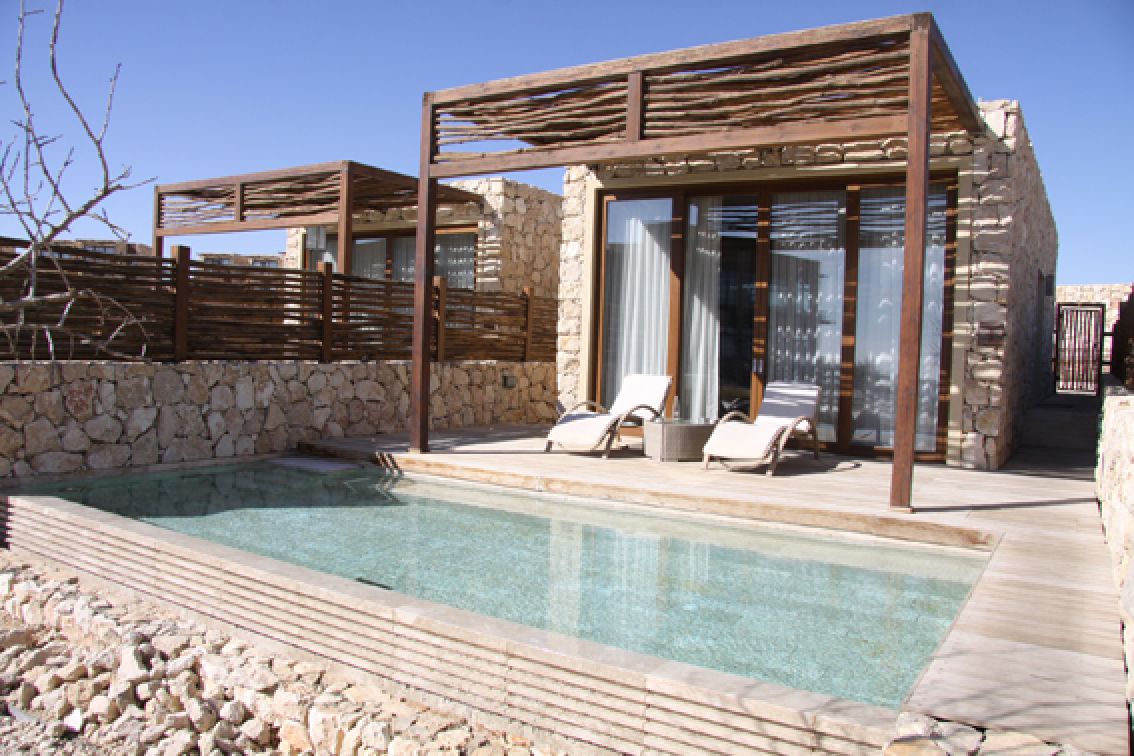 On arrival, it is obvious that this is no ordinary hotel. From the exquisitely crafted lobby you gaze out over the 25-mile long crater, which is a third of a mile deep, and formed part of the ancient spice route.

The rocks change colour according to the hour and the season and at times all that can be seen in the vast and eerily silent nothingness is twinkling stars. As general manager Sigi Levenkopf said: “When you stand and see the view, it’s like the genesis of everything – creation.”

Most guests spend only a couple of nights at Beresheet, often en route to Eilat, some making the three-hours journey from Tel Aviv just to enjoy Israel’s newest wonder.

It’s back to nature at this resort. The 110 bedrooms are built in blocks, no more than two storeys high, and golf buggies ferry guests to and from the main block which houses the restaurant, bar and spa.

Some of the ground floor rooms have heated infinity pools and the presidential suite, a vast structure standing its own, commands the best view of the crater.

Most guests book half board because there is nowhere to eat within easy striking distance, but Beresheet more than compensates. Breakfast and dinner are gargantuan affairs, in the best Isrotel tradition. 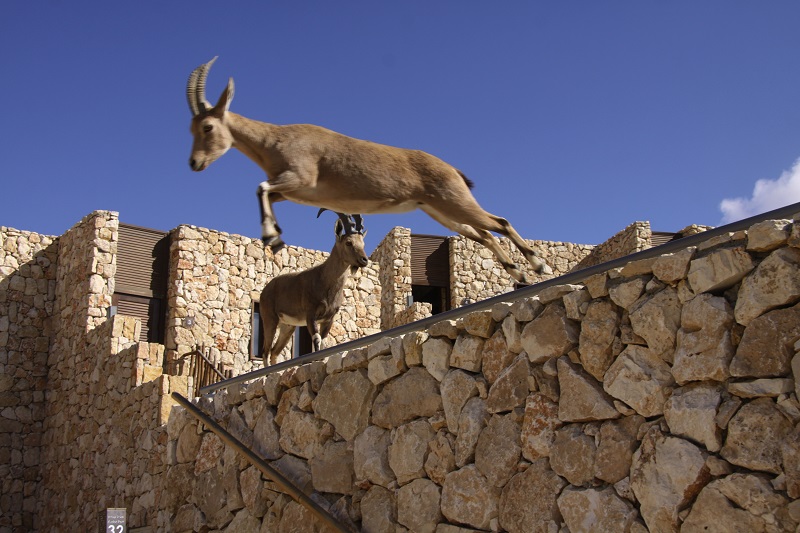 In the evening, starters are served buffet-style with main courses chosen from the menu. There are several cuts of beef available, fish, vegetarian and much more, served with style – and plentiful. Israeli breakfasts are renowned. Here, as at Beresheet’s sister hotel, the Carmel Forest Spa, they have reached new heights.

There are indoor and outdoor pools, a high spec gym and tennis courts and the spa offers uniquely designed treatments, from the most relaxing to the more intense shiatsu or Thai massage.

Yoga classes and others are available for guests. Beresheet is an hotel with a spa, rather than a spa hotel and welcomes families, even with young children. They are catered for with a playroom, well equipped with plenty of toys and games.

We chose to spend a week at Beresheet and even had we not ventured from its grounds throughout we would have been perfectly happy to relax amid nature for the duration of our stay.

Isolated as the hotel is, there is plenty to do in the immediate vicinity with many activities arranged by Beresheet itself. Bikes and Segways are available and there are hikes, walks, rappelling, jeep tours, horseriding and Tai Chi tours. There is a museum of the crater and tours of it.

It’s worth seeing the desert sculpture park next to the hotel, as well as the natural rock features that resemble chiselled wood. Close, too, is an alpacca farm which includes llamas, camels, goats, pigs and horses and is as popular with adults as kids.

Fifteen minutes from Beresheet is Carmey Avdat Farm, a vineyard and winery which dates its origins to Roman times but has only been used again for 15 years.

Close to that is Kibbutz Sde Boker, the home of Israel’s first Prime Minister David Ben-Gurion.

And if you want to evoke the memory of Beresheet when you’re back home, be sure to slip a couple of the hotel’s bath gels or skin creams into your case.

The unique aroma, created for Beresheet and evident throughout the resort, is certain to bring back happy memories.

In this article:Israel, Negev, Finance