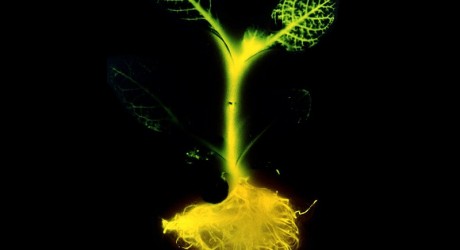 Imagine a world where the streetlamps no longer run on electricity. Or rather, they no longer exist, since they are replaced by trees that emit light. This alien-like scenario is not something out of sci-fi movie Avatar – it is actually a Kickstarter project by Israeli-American company Genome Compiler – and it’s well on its way to reality and way past its initial fundraising target.

Using the company’s technology, Genome Compiler will synthesize the DNA of an Arabidopsis plant with genes from a firefly that cause natural luminosity. Project manager Anthony Evans calls the project a “first step in creating sustainable natural lighting.”

The company set a goal of $65, 000 on crowdfunding website Kickstarter and reached it a mere three days after launch. Since then, the project has raised close to a quarter of a million dollars, with more than a month left in the campaign.

From seed to plant

Sponsors who pledge $40 to the campaign will receive seeds that grow into glowing plants. Backers who invest $10, 000 will get any 30-letter message they choose encoded into the plant’s DNA. According to the campaign page, the first plants should be ready within a year.

Genome Compiler founded in 2011, by biochemist Omri Amirav-Drory, joined by Nir Ben Moshe, Yogev Debbi and Roy Nevo, who previously worked for Intel’s Israeli R&D center in Haifa. The company created a product which is like a “Photoshop for geneticists, ” allowing synthetic biologists to engineer and print DNA sequences.

The Kickstarter project was created by Evans, who is part of the company’s San-Francisco HQ.

Previously, Genome Compiler told NoCamels: “Genome Compiler is built on the idea that biology is information technology. We can design and program living things the same way that we design computer code. Genetic designers today are still writing in 1s and 0s – they lack the missing tools to design, debug, and compile the biological code into new living things.

“At Genome Compiler, we’ve built just that – a simplified solution for designing DNA.”