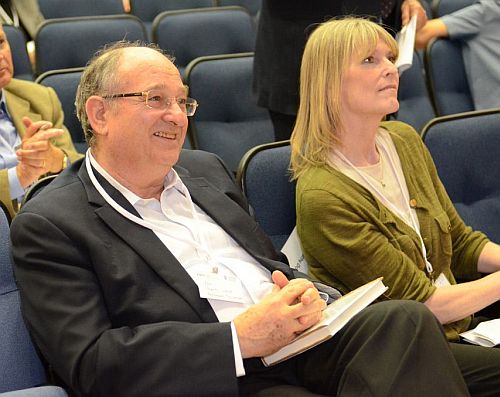 Please help us out :
Will you offer us a hand? Every gift, regardless of size, fuels our future.
Your critical contribution enables us to maintain our independence from shareholders or wealthy owners, allowing us to keep up reporting without bias. It means we can continue to make Jewish Business News available to everyone.
You can support us for as little as $1 via PayPal at office@jewishbusinessnews.com.
Thank you.
A senior delegation of New York city officials has visited Israel to discuss the establishment of the Cornell-Technion Scientific Center in New York 2017 — a joint venture of New York’s Cornell University and Haifa’s Technion – Israel Institute of Technology.
Prof. Cathy Dove, Vice President of Cornell University, declared the project would have a tremendous contribution to New York’s development: “The Scientific Center will have a crucial impact on the city, ” said Dove, who recently visited Israel along with a group of 30 entrepreneurs and senior New York City economic department officials. The initiative “derives from Mayor Michael Bloomberg’s policy of drawing high-tech companies, investors and technology entrepreneurs to the city”.
According to Dove, the building of the campus will be accompanied by the development of required public transportation, student and staff accommodation and surrounding services, which would create thousands of new jobs. Dove explained that in New York sites that are not served by the subway are
deemed to be inaccessible. That is why the development of public transportation must accompany the building of the new campus.
The campus is expected to open in 2017. The first stage will involve the construction of student accommodation towers and faculty staff residential areas, which will be built alongside the academic buildings.
The delegation members met with a group of Technion senior staff and a team of Israeli economic officials to discuss the joint venture. One of the delegation members described the advantages of the new project saying the project model has already created a high-tech strip along New York’s F subway line. “The short distance involved will promote interaction among companies, enabling employees to get to work directly from the campus or get from one start-up company to another in minutes.”
Professor Daniel Huttenlucher, dean of Cornell University Computing and Information Science, Prof. Dove, dean of Cornell’s School of Engineering and Prof. Chaim Gotsman, of the Technion’s Faculty of Computer Science, have been collaborating with New York City officials during the process of planning the model for this innovative Master’s degree course. Pilot programs are due to begin this September on several locations around the city, until the building of the new ecologically-friendly campus is completed in 2017.
The campus’s operating expenses are expected to reach more than $2 billion over the next 30 years, including the enlistment of a distinguished team of faculty member, that will eventually number 280. The rigidly selected student body is expected to reach 2, 500 by 2043. The campus area will extend to some 186, 000 square meters.
In this article:new york, technology, joint venture, Finance