It has just been announced that Leonard Lauder, Chairman Emeritus of Estée Lauder, the cosmetics empire, and 80 years old now,  is donating his entire private collection of important Cubist works of art – comprising 78 paintings, drawings and sculptures – to the Metropolitan Museum of Art in New York, a collection which he put together painstakingly over many years and which is likely worth today more than $1 billion.

The collection includes 33 works by Pablo Picasso, 17 by Georges Braque, 14 Férnand Legers and 14 works by Juan Gris, and taken as a whole the collection presents the development of Cubism, which took the art world by storm in the early part of the twentieth century.  According to scholars, this private collection is as good as any in existing collections in the best museums in the world anywhere today. 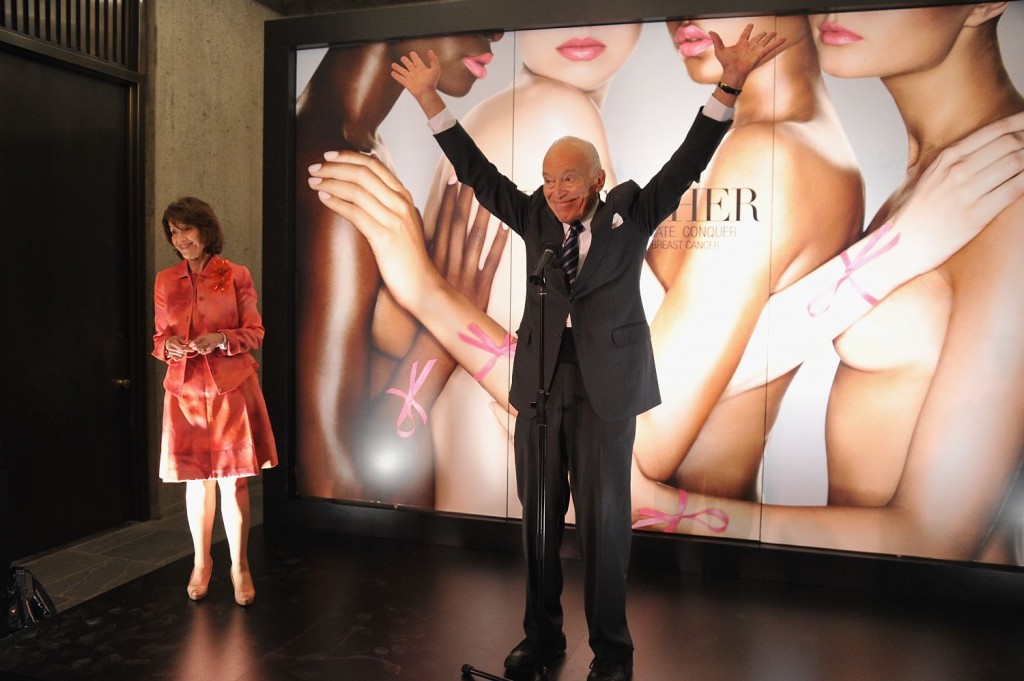 The gift of Lauder’s entire collection to the Met was finally approved by its Board on Wednesday, after Lauder held discussions about such a donation over several years with more than one potential recipient.  There are no strings of any kind attached to the collection as to how it may be displayed by curators of the museum, and preparations are now underway for an initial exhibition of these works for the second half of 2014.

For a New Yorker aware of what his collection could do to transform one of the city’s most  important, and especially to this writer it must be said one of its stuffiest, museums Mr. Lauder saw the Met as a perfect fit. “Whenever I’ve given something to a museum, I’ve wanted it to be transformative, ” Mr. Lauder explained. “This wasn’t a bidding war. I went knocking, and the door opened easily.”

His mother and family matriarch was Estée Lauder, who died in 1994 at the age of 97 and was the founder of the enormous cosmetics empire Estée Lauder.  According to one of her daughters, Aerin, who is herself today creative director for the brand,  “Estée had this idea that there were no ugly women, just lazy women.”

The company she founded endures and prospers today on this one significant premise: that all women are beautiful, and various of her children and grandchildren have been, and still are, heavily involved with the company, though today it is also managed professionally.

Estée’s two sons Leonard and Ronald, are both important major philanthropists, both play leadership roles in the Jewish Community and, in particular, both have provided enormous support to the arts in New York City where they grew up and live today.

Mr. Lauder and his younger brother, Ronald S. Lauder, a founder of the Neue Galerie on the Upper East Side, are among the most influential collectors and supporters of art today in New York. Clearly there is a link between appreciation of beautiful women and of beauty in art.  And while others buy widely, often in multiple periods and styles, Leonard Lauder stands out for his single-minded focus on the Cubist period of art.

“You can’t put together a good collection unless you are focused, disciplined, tenacious and willing to pay more than you can possibly afford, ” Mr. Lauder said. “Early on I decided this should be formed as a museum collection, ” and “whenever I considered buying anything, I would step back and ask myself, does this make the cut?”

What is this thing – Cubism ?

The term Cubism first appeared in a review of a 1908 exhibition at Daniel-Henry Kahnweiler’s Paris gallery, which featured early Cubist works. The ground had been prepared earlier, by Cezanne with his mature paintings, particularly his landscapes, but also his portraits, which emphasized the inter-locking geometries underlying much of how we perceive the real world.  Picasso and Braque, soon to be joined by Fernand Léger and Juan Gris, went to the next step of partially obliterating realistic form in favour, first, of highly distorted perspectives and eventually leading to purely abstract forms, which then became the dominant motif of art even until today.

Cubist artists also extended this revolution in art with use of non-traditional materials, adding e.g. cardboard, sand, sawdust, rope, wood, wallpaper, stencils and even bits of newspaper into their work at every opportunity.  The two dimensional space of the individual canvass and the three dimensional space of sculpture were essentially bridged – and from this point on as order breaks down anything goes. 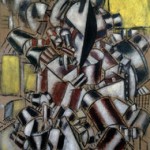 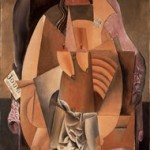