Although major progress has been made in the field of breast cancer treatment, some forms of the disease are still considered therapy resistant. A recent paper published by the Weizmann Institute in Israel suggests a new treatment for one of these types of cancer, called triple-negative. 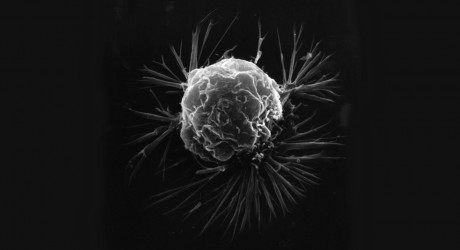 Present-day breast cancer drugs work by destroying malignant tumors in a targeted manner. The treatments block certain characteristics that contribute to the tumor’s growth. Some of the tumor’s cells have receptors for certain hormones which enable it to grow. However, as much as one in six tumors does not have such receptors, making this form of treatment redundant.

However, some of these therapy-resistant tumors have a growth-factor receptor called EGFR, which could be a potential target for cancer drugs. But an EGFR-blocking drug has proved ineffective in treating them. The researchers from Weizmann Institute hypothesized that using two EGFR-blocking antibodies may do the trick – and a lab experiment proved they were on the right track.

The whole is greater than the sum of its parts

The researchers tried different combinations of such antibodies and found that in some cases, the combined effect is even more potent than would have been expected by simply adding up the separate effects of each. It seems that the treatment has created a previously unknown anti-cancer mechanism, which proved effective when the two antibodies bound themselves to two different parts of the EGFR molecule.

The technical explanation for the effectiveness of the treatment is that the antibodies work in a combined fashion: In addition to blocking the EGFR and recruiting the help of immune cells, the antibodies probably overwhelm the EGFR by their sheer weight, causing it to collapse inward from the membrane into the tumor cell. With no EGFR on its surface, the tumor could not receive signals “telling” it to grow.

According to the researchers, if their findings will be supported by further studies, the two-antibody approach, in combination with chemotherapy, might in the future be developed into an effective treatment for triple-negative breast cancer.

The study was published recently in the Proceedings of the National Academy of Sciences.