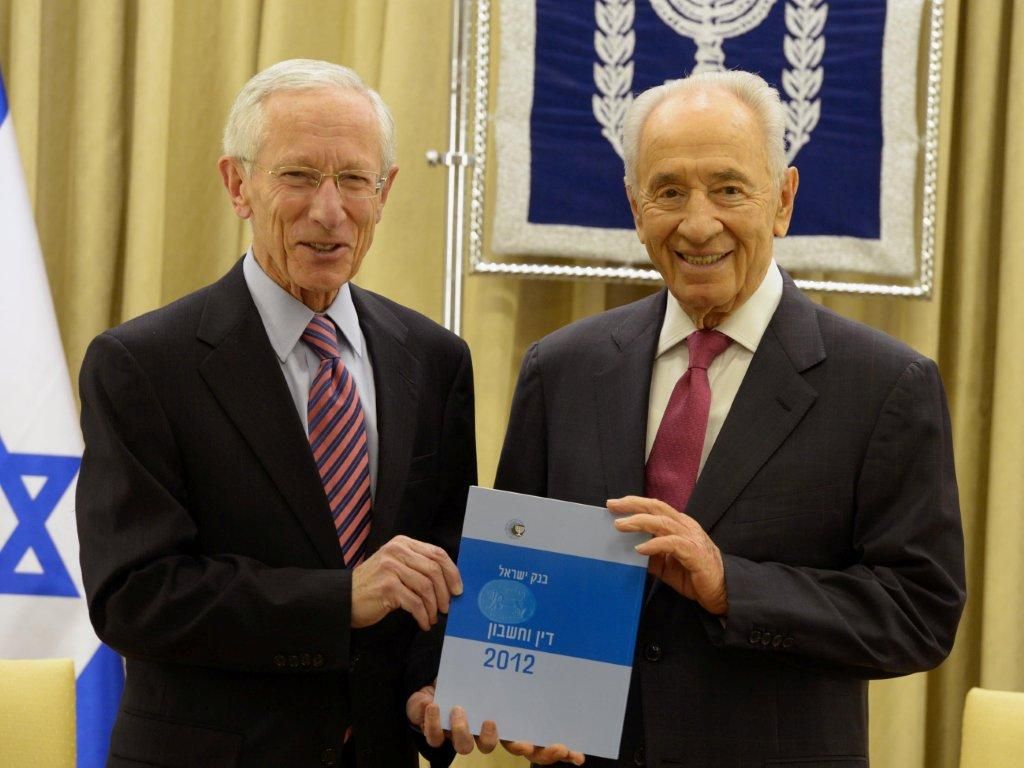 “These were impressive years for Israel’s economy and I’m grateful for the opportunity to thank Stanley Fischer on behalf of the State of Israel”‘ said  President Peres to Stanley Fischer:

. Professor Fischer said to President Peres that the report summarizes a market that was good in 2012 but less so than in previous years. He added that growth was relatively fast at 3.1% and that his counterparts his abroad would be pleased with that level of growth but that in Israel we had got used to a faster rate.

Governor Fischer added that the macroeconomic situation was positive with the exception of the budget deficit as seen by a deficit of 4.2%, “Growth is relatively good (3.1%), inflation is low (1.6%), unemployment is at its lowest rate for 30 years but there is a problem in the budget which must be dealt with before it becomes greater. I am pleased to see that the new Finance Minister is taking the deficit into account and understands the depths of the problem. There is much talk today about the middle class but it is no less important to talk about the poor in society and how they too can enjoy the growth in the economy.”

“The belief you find in others, I find in you”

President Peres thanked the Governor and said, “The Israeli economy is outstanding when the objective situation is taken into account. One such factor is that the expenditure in the country matches the size of the state, but the security situation is also an economic challenge which is measured not by the size of the country but by the size of the threat.” President Peres asked Professor Fischer about the report including why, despite the positive macroeconomic situation, there were still poverty issues including 850, 000 hungry children in Israel and about the state of education in Israel.

President Peres saluted the work done by Stanley Fischer as Governor of the Bank of Israel to improve Israel’s economy in light of his decision to step down and said, “These were impressive years in the economy of the State of Israel and I am grateful for the opportunity to thank you on behalf of the State of Israel – you increase my faith in people. In 1984, when the State of Israel was faced with an economic crisis and rampant inflation I received advice from Stanley Fischer who was then in the United States. Your advice helped me then and helped to save the economy, likewise today your contribution is vast.”

Stanley Fischer thanked President Peres and said, “The belief you find in people I find in you – I am impressed time and again how one person can do so much good for a whole country. I thank you for our joint work.”

In this article:Bank of Israel, Finance