Better Place has lost since 2007 to date 3 billion sheqel ($800 million). about 600 million was lost in the fourth quarter (about $200 million) . The Israel Corp. warns: there is doubt regarding the continued existence of Better Place. 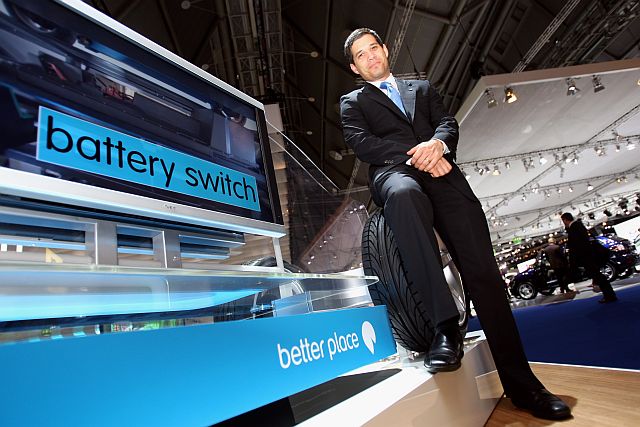 / By Cellia Shani  and Lenny Dreyer/

Better Place lost 1.6 billion sheqel in 2012 of which about 600 million was lost in the fourth quarter (about $200 million).  In total the company has lost about 3 billion Sheqel (roughly $800 million).

Data published on March 21 by the Israel Corporation (parent company of Better Place) within the framework of its annual report shows a serious worsening of Better Place’s operational results and for the first time a warning was attached that expressed serious concern about the continued activities of the company.

It was noted that Shai Agassi: the founder of the company and its Managing Director was fired by Idan Ofer who is one of the controlling figures in the Israel Corp. due to the tremendous losses incurred and which began the deterioration of the company.  Agassi’s replacement, Evan Thornley did not last in the position very long and left after only three months. Following his departure other senior members of the company  left and wide personnel cuts were made.

In 2012 the company began marketing automobiles in Israel and Denmark, however in both countries combined only about 700 were sold and income form these sales totaled only about $7million.  The black hole of operational expenses continued to plague the company and caused a serious cash flow crisis as only $35 million was coming and the operational losses reached $385 million.

Most of the damage was caused in the fourth quarter which Better Place concluded with a loss of $251 million dollars and in this quarter Better Place recognized a devaluation of $179 million in its activities in Israel and organizational changes were made.  Better Place has experienced serious shocks recently that began with the firing of its founder Shai Agassi from his position as Managing Director based on disappointment regarding the progress of the company and in the rate of penetration of electric cars into the market.

Agassi’s replacement Evan Thornley left Better Place less than three months after being appointed to the position and his departure led to the wholesale departure of other senior staff and serious reduction of the number of employees.  As part of the new reorganization at Better Place 1/3 of its employees were let go and today it employs about 600 people world wide of which about 10% have received termination notices.

Within the framework of trying to save the company, Better Place has decided to enter only two basic markets, Israel and Denmark upon whose highways today there are only a few hundred electric automobiles of the Renault Fluence model equipped with the company’s batteries.  The Israel Corp. announce today that “Better Place is operating and will continue in the implementation of those steps begun a few months ago, with the goal of making the company more efficient, decreasing expenses and getting onto the path of profitability.”

Better Place’s income is not significant and totaled last year only about $7 million, whereas the yearly operation losses nearly doubled to $386 million.  This high rate of cash expenditure at Better Place can be seen in the severe drop of about 90% in the cash volume in the Company’s coffers that contained at the end of the year $34 million as opposed to the $293 million at the end of 2011.  The deficit in shareholder’s equity in the electric car company reached $765.

The Israel Corp. noted in the report that after the infusion of $66 million in the last month, “as the leading investor in Better Place we are satisfied with its progress over the past month and will test optimistically additional investment.”  This in light of the fact that Better Place is dependent on continued investment by means of capital or loans until such time that it can produce a positive cash flow from ongoing operations.”  The Israel Corp. also noted that “Better Place has changed its operational structure and management feels that this move will seriously decrease the amount of additional funding needed in 2013 and future years.

Shai Agassi, Israeli entrepreneur was born in Ramat GanIsrael on April 19, 1968.  Featured prominently in the book “Start Up Nation- The Story of Israel’s Economic Miracle” by Dan Senor and Saul Singer, Agassi was named one of the 20 most influential global personalities by CNN-Time magazine in 2003 at the ripe old age of 36. He was also included in Time’s list of the 100 most influential people in the world in 2010.

Following his graduation from the Technion- Israel Institute of Technology in 1990 Agassi founded a company called Top Tier Software in 1992.  He sold the company to Germany’s leading software corporation- SAP in April 2001 for $400 million.  As part of the deal Agassi joined SAP in an executive position and was the heir apparent to succeed its CEO but left SAP when his appointment was delayed.

In 2007, Agassi presented a White paper to the five leading automobile manufacturers at the annual meeting of the World Economic Forum held in Davos Switzerland.  That these high powered executives agreed to meet with him was due to the influence of Shimon Peres, Nobel prize laureate and current president of the state of Israel.  Agassi’s White Paper outlined a business plan for producing a completely electric car which would be completely battery powered   Under the theory that most consumers use the car to travel to and from work, charging the battery over night would be a convenient solution.  For longer journey’s Agassi developed a theory for changing batteries at service stations using technology derived from the Israeli air force’s method for loading and unloading bombs.  Agassi shocked the business world by raising over $200 million dollars in 2008 for the start up he called “Better Place”.  In 2010 he raised another $125 million dollars in Denmark with a plan for eliminating all gasoline propelled vehicles in that country.  One of the many unique features of the Better Place business plan was its method of marketing which borrowed heavily from the cellular telephone model.  According to Better Place’s plan the customer would sign up for a plan based on miles rather than minutes and while the customer would own the car, Better Place would own the battery.

In the fourth quarter of 2012 Shai Agassi was fired as the CEO of Better Place after accumulating losses of approximately $590 million dollars.  Better Place failed to meet its sales projections and the question is why.  The answer to this question has many components.  When estimating the distance an electric car could travel on a single night’s charge was underestimated as factors such as air conditioning, hilly terrain and other elements were not adequately addressed. One of the basic problems is that battery technology has not advanced significantly since the time of Edison.