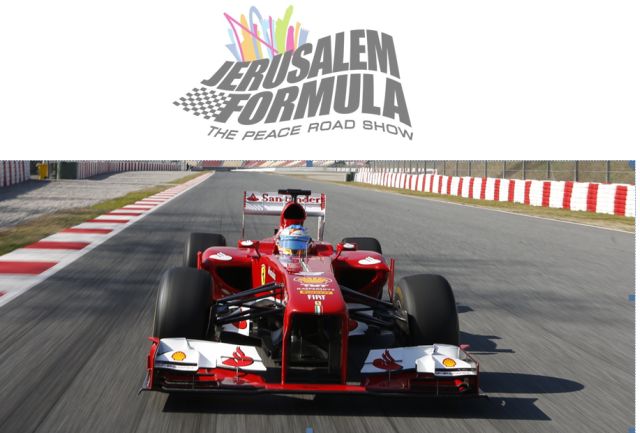 The city of Jerusalem is getting ready for a monumental occasion: A Formula One road show in the streets of Jerusalem, including top-of-the-line race cars from Ferrari, Mercedes, Audi and more.

Jerusalem Formula road show will take place on June 13-14. The cars will be exhibited in advance of the show at the newly renovated Train Station from June 9-13. The event includes two days of driving shows. Additional racing teams and racers will be revealed on May 28th.

In addition to the Formula One cars, which will be the stars in The Peace Road Show, Ferrari Challenge cars will also participate in demo drives, as well as drift cars with high horsepower V8 engines and other sports cars.

Two wheel motorsport enthusiasts will enjoy a spectacular and unique performance by one of the world’s best stunt rider, Chris Pfeiffer (Germany), who will be coming to Israel for the first time. Viewers will also enjoy shows by SUPERBIKE or MOTOGP teams.

The public is invited to view the event or free with special viewing areas along the route.  In addition, tickets for access to raised seating areas will be available for purchase.

A professional team of drivers and technicians from Ferrari in Marnelo, Italy will be arriving for this event, which will bring to Israel some of the greatest professionals in the field of motorsports.

The former Formula One driver Giancarlo Fisichella, who participated in 231 GRAND PRIX races, and holds a record of 19 podiums and 3 wins, participated in the Jerusalem Formula  media event.

Mayor Nir Barkat: “The cars of Formula One against the walls of the Old City are a powerful image and statement, and will contribute enormously to projecting the image of Jerusalem as an open and inviting city. In addition to the economic benefit and increased tourism that will result from this international event, we hope to convey a message of peace from Jerusalem, and we invite sports enthusiasts from around the world—regardless of religion, race or nationality—to join us for this important historic event.”

In this article:Israel, Jerusalem, Finance