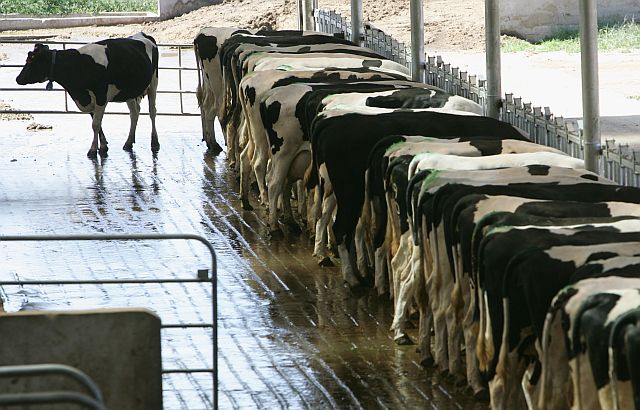 When it comes to automated animal-milking, Israel is considered a world-leader. For decades, Israeli innovators have continuously developed advanced techniques to maintain dairy farms and milking efficiently. It is no surprise then that when a Canadian goat farm needed to enhance productivity – they turned to Israeli technology.

AfiMilk, a local company specializing in dairy herd management and situated in the Jordan valley kibbutz Afikim, has built a goat-milking parlor at Mariposa Dairy in Ontario, Canada. Mariposa Dairy has 1, 500 goats that produce goat cheese for supermarkets in North America and was looking for a solution to increase productivity.

Shlomi Azran, AfiMilk’s sales manager, proudly takes us around the dairy farms of kibbutz Afikim, built in 1932, on the southern tip of the Sea of Galilee. He tells about AfiMilk’s latest project in Canada: “The parlor has 30 positions on each side, so it can milk 60 animals at each time. In one hour, it can milk 600 animals. We also built intricate automatic gates that guide the movement of the goats”

Grinning broadly, he adds:  “The farmer in Canada has told us that with our system, he is producing more milk with less goats.”

AfiMilk’s project in Canada is not its first international business coup. In 2010, AfiMilk announced its partnership in a half-billion-dollar milk production project in Vietnam. The project involved establishing a dairy farm of 30, 000 cows to supply 500, 000 liters of milk a day, about 40 percent of Vietnam’s present milk consumption. AfiMilk was responsible for all stages of the enterprise, including breeding and preparing the land for crops that will be used as feed. 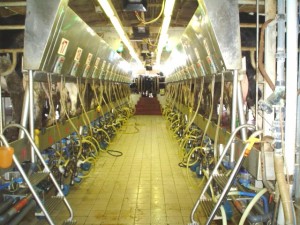 A milking parlour on Kibbutz Revivim in Israel

Besides the milk meter, AfiMilk also has leg tags on each animal to collect data on the movement of the animal. According to Azran, the leg tag can tell whether a goat is standing or lying down, for example. The farmer would then be alerted when an animal is spending too much lying down, which can be a sign of illness.

Azran says the data can also be used to choose the next generation of goats for the farm. “Let’s say you have space for 100 animals. You want the best 100 animals. So every year, farmers decide on the kids (baby goats) based on the mother goat’s health records, ” Azran explains.

The system for the goat-milking parlor is derived from what Afimilk has been doing with cow-milking. However, Azran is keen to stress that important modifications had to be made to optimise a system for goats.

“It’s a different kind of milk. The raw material is different. And then there’s the amount. If cows give you 10 liters per milking, the goat gives you 1 liter or 1.5. The amount is very small. So to be precise, you need to use specific equipment. You can milk a goat with cow equipment, but your results are not precise. And for us it is very important to get the right information.”

So how did Israel’s technological advantage come about? According to Ornit Sade-Benkin, the General Marketing Manager at SCR Dairy, another Israeli herd management specialist, it’s a result of several factors.

Firstly, 60 percent of the country’s cows are located on farms in kibbutzim – Israel’s famous socialist collective communes where inhabitants mutually own means of production and divide among themselves the social and economic responsibilities, Sade-Benkin explains. An example of mutual cooperation is the cooperative ownership and management of “Hachaklait, ” a veterinary organization that works closely with the communes.  Each farm pays an annual fixed rate per animal and in turn is visited two to three times per week.  Each cow receives several routine visits per lactation to ensure she is producing at maximum potential. Such cooperation creates a less competitive environment where knowledge and best practices are shared among farmers.

Secondly, says Sade-Benkin, “Israel is one of the biggest hi-tech centers in the world. The eco system provides a good ground for start-ups and entrepreneurship. Startups like SCR Dairy are able to look at what the farmer needs and provide a suitable solution.”

She adds: “SCR Dairy, for example, moved from being an Original Equipment Manufacturer (OEM) for the dairy industry to developing a breakthrough technology it calls FreeFlow. FreeFlow uses infrared technology to measure the quality and quantity of flowing milk. Today, it is the biggest manufacturer of milk meters, and has expanded to produce other equipment used in milking cows.”

“It looks like Israel will continue to be the leader in the field of dairy herd management for some time to come, ” Sade-Benkin concludes.