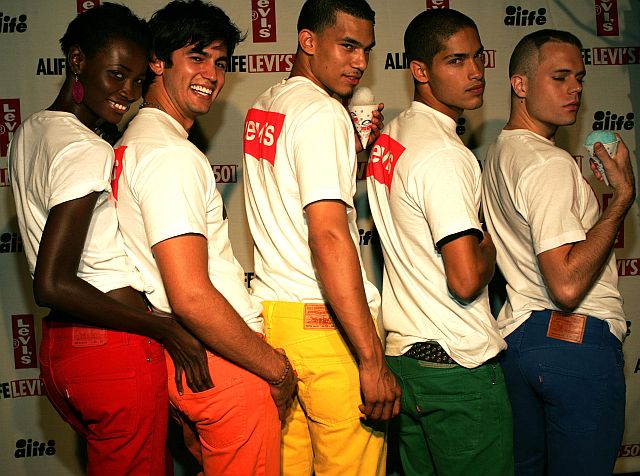 Just say the word Jeans and the image of the ultimate male immediately comes to mind: the Marlboro man, tall and muscular with steely blue eyes, suntanned skin with, a gun tucked into his back pocket and around his slim waist a blue, easily identifiable pair of blue trousers- Levy’s model 501. Much water has flown under the bridge since and tough men developed sensitivity and opened their eyes.  Cigarettes and suntanned faces no longer symbolize good health but are factors causing cancer. Soft, tinted contact lenses create artificial blue eyes and even the horse has been replaced by a hybrid automobile and the cellular charger has replaced the revolver.  Only the blue jeans remain the with us.

There is no more American piece of men’s apparel than Blue Jeans which were invented in 1873 by Jacob Davis and Levy Strauss.  The crude blue material that until that time was used for cheap work clothes called “denims: received a patented addition of copper brads to strengthen the stitching and thus the trousers were upgraded and quickly became the most popular piece of clothing in the world, the universal trousers that crosses over the borders of age, nationality, body shape and geographical location.  A fashion industry that has a turnover of $91 million a year.

Copper brads at the corners

Strauss was born in Bavaria in 1829, was orphaned at the age of 16 and in 1843 sailed for New York to join his brother who had established a wholesale business which, among other things dealt in fabrics and textiles.  In 1855 he moved to California to establish a branch of the family business taking with him silk, textiles, luxury and specialty items. One of his clients was a tailor, Jacob Davis of Reno.  Davis sewed trousers for miners however he was unable to make them sufficiently durable for the work they did.  The trousers he was making were always tearing particularly around the pockets and the button  above the zipper.  After much consideration, Davis decided to try adding copper brads at the corners of the pockets and above the zipper in order to strengthen the trousers.  These reinforced trousers were so successful that he was afraid someone would steal his idea but he lacked $69 in order to register his patent.  He turned to Strauss and in 1873 registered the patent in their names.  Davis moved to San Francisco where he expanded his production of the trousers which quickly became known as masculine work pants that were reliable.  Seventeen years later in 1890 a newer and more flexible material was introduced, blue denim and its combination with the copper brads created the blue jeans we are still wearing today.  In the same year the model 501 was created.

In the 1920s their trousers were became the most sold work pants sold in the US.  Although, as in every loves story there is a moment where history, fashion, art and sociology meet after which everything looks different.  And so, in the 1950s, while the world was still licking its wounds following the Second World War, American youth began to wear these jeans as a protest to their parents and the adult world.  Movie stars such as Marlon Brando, James Dean and Elvis Presley rode this wave and wore jeans as a social statement.  In response the establishment forbade the wearing of jeans to school and the workplace.  This ban of course propelled the popularity of this product and created fashion brands such as Lee Cooper and Wrangler.  In 1956 the magazine American Fabrics wrote: denim is a completely new category in apparel.  What were once work pants became leisure apparel as well.

Nothing comes between me and my jeans

In the 1960s the popularity of jeans waned somewhat world wide as they became identified with the “hippie” movement and social protests for equality.  Flowers were embroidered on them along with slogans such as “make  love not war” and afterwards they were used to make love during the time of war.   In the 1970s armed with long hair and torn, jeans changed the world and were used by the most popular stars of the era.   In the 1980s they starred in Calvin Klein’s controversial slogan “nothing comes between me and my Calvin Klein jeans” and jeans became high fashion.  New terms were coined  such as “Designer Jeans” and “Stonewashed” jeans.  At the same time original ideas came into fashion.  Cut jeans, folded, crushed, etc. until tiny jeans were produced which accentuated arrogantly the lovely curves of the backside.  In the 1990s the skinny, sculptured jeans appeared on the stage of every electronic rave.

Even today in the 21st century jeans are still the main piece of apparel in every wardrobe.  Today they are colored, skinny, wide, high, low embroidered and decorated with faces.  It is possible to buy them for a few sheqel in the shuk or to spend half a month’s salary on designer jeans.  However it makes no difference what type you choose or how many pairs you already have, there is always a special place in our hearts and our closets for another pair of model 501s by Levy’s

In honor of the 160th anniversary of th Jeans we have collected for you a number of facts that perhaps you didn’t know about the American wonder:

In this article:Fashion & Cosmetics, jeans, Finance